My Christmas present to myself was a Garmin GPS. I used to like to get lost when I was younger. I'd drive in a neighborhood and find my way out, and then into bigger cities and finding alternate routes. It used to be exciting and different! Now that I'm older, I don't enjoy getting lost. With the invention of mapquest, I am a printing queen! I will print directions just in case. What sealed my choice this season on a guiltless gift I can splurge on, was trying to get from point A to point B (and mapquest didn't help.) I read over those directions and couldn't find my way out of a subdivision to a wedding (and didn't want to be late.) I had to eventually follow someone to the location. On the way back to the subdivision, I followed a car (whose occupants lived far away) and their gps took them directly where they needed to be. What a lifesaver!!

I have been without an electric can opener for years (I don't use many cans and it didn't seem to be a priority.) Last week, I cooked three recipes that required at least two or three cans (of stuff) each. Well, I definitely found the time and made it a priority to buy one. I was glad it was under $10 and figured I should have gotten one a long time ago. Aaaww!

Crack! Pop! It seems that I feel like the tin man sometimes (from the Wizard of Oz!) Maybe I need a little oil, lol! My knees, elbows and ankles pop when I get up from somewhere or move positions. I guess it's just part of getting older. I would rather my bones not pop while I'm sneaking out of a room (after putting my kid to sleep though.)
Posted by robin at 12/30/2008 01:18:00 PM No comments:

"Thanks for being a Mom." That's what was said to me at the end of a conversation I was dreading. An incident occurred this past weekend with my daughter and her friend. My daughter drives and her friend used that to her advantage. Her friend left and got into another guy's car while having my daughter wait for her to return. As it turned out, the girl took a long time and ignored her phone calls and texts, wanting to spend more time with her 'friend.' They were at a nearby dark park... My daughter ended up leaving her and the friend's parents came and got her. I became concerned when my daughter hadn't called to let me know they arrived at their destination so I called her. She was upset and said she was coming home. She said she didn't know what to do (when it was happening.) The girl's stuff was still in the car too. I told my daughter that she knows what she needs to do...(hoping her moral compass would let her know what to do.) I don't really think she wanted to know what to do...she just wanted her friend to be nice to her and do that anymore (without having to say 'no' to her.)

I wasn't sure what story was told to the friend's parents but I needed to let them know what really happened. I knew the friend's address and used that info to get their last name and then their phone number (I love the internet that way.) I explained what had happened (as I knew it from what my daughter had said.) Fortunately, her parents were already alerted by cues from the friend beforehand and were already thinking she was planning something. We exchanged lots of phone numbers and vowed to call each other in the event they spend the night with each other in the future. The friend will, of course, not allowed to hang out with her friends like my daughter for a while, and has already had her cellphone taken away. 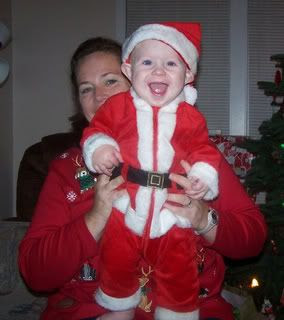 I had a very merry Christmas and ate way too much! I should finally get some sleep after staying up late for days leading up to the much anticipated holiday! Now, the clean-up begins....tomorrow.
Posted by robin at 12/26/2008 10:47:00 PM No comments:

Today is my favorite day of the year! It's Christmas Eve...I make wassail, play Christmas music, watch Christmas shows on tv, leave the Christmas lights on all day, read Christmas stories to the kids, finish up wrapping presents, and bake cookies...lots and lots of Christmas cookies!
Posted by robin at 12/24/2008 02:01:00 PM No comments:

I found a local radio station that plays Christmas songs all day every day. I think it has been doing that for several years but I had forgotten. I find myself turning it on each day now...and this afternoon, finally realized why. While driving around returning from an errand with my boys in the car, I found myself singing out loud and loving it! I think I love Christmas songs because I know most of the words! And what words I don't know, I make them up, lol! I tried explaining that drummer boy song to my preschooler today...and making the sound, pppprrrumpapumpum! It brings me back to the cartoon that came on at night when I was a kid...I looked forward to it and the other ones that came on every year at night (when there was no such thing as cable!)
Posted by robin at 12/16/2008 07:12:00 PM No comments:

Everybody's sick around here! I've been fighting off the 'gunk' for over a week. My youngest daughter has missed most of school this week. Now, the little boys are sick. Actually, they've been having symptoms of a cold for a week or two but yesterday, my preschooler's cough took a turn for the worse and his ear started hurting. And the baby seems to always have a runny nose (probably due to teething, but not necessarily because of his wheezing.) Nevertheless, all three kids went in to to two different doctors today and were seen. I'm not feeling bad enough to go see a doctor but just enough to feel tired and under the weather all day long, ugh! 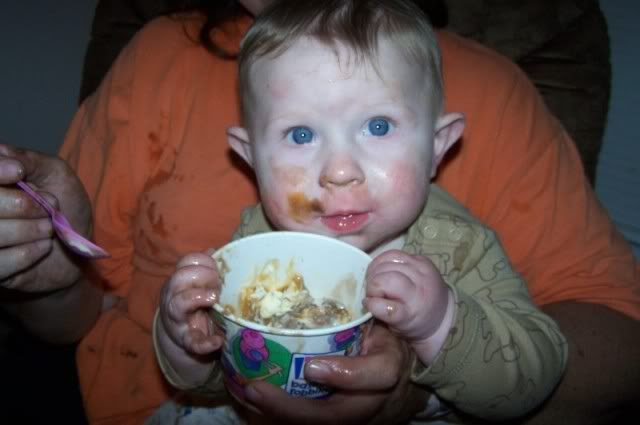 I was SO excited when our city got a Baskin Robbins Ice Cream store (after not having one for over 7 years!) I am a huge fan of their ice cream and blame it on my childhood. LOL! I loved going to our local store and sitting on pink chairs while spending time with my family. Later, I'd drive through the drive-through and the worker knew immediately upon seeing me what I was going to order. After a long and hard day cleaning out our huge shed and organizing the entire inventory (that took over 9 hours of hard work), I ended it by sending my daughter to get some ice cream for me. Unfortunately, when she returned, she handed it to me while I was holding my youngest son who had a taste of it and REALLY liked it!!! I guess I had better write this in his baby book that this was his first food. I had to fight to a bite as he'd dunk his whole face in the cup. I guess he's gonna love ice cream as much as I do.
Posted by robin at 12/04/2008 10:03:00 PM 1 comment: