Years ago, I couldn't read a certain small font at work and bought some reading glasses to read it. Since then, slowly but surely, I can tell that my eyes are getting older (and I now use reading glasses at the computer.) I have noticed that I am doing what my own mom did at this age (squint and ask for clarification on certain numbers or letters.) I used to only need them for close-up reading but I've noticed in the last few weeks, that even farther away things are now blurry. I seem to carry reading classes around with me all the time (reading bedtime story at night, reading menus at restaurants, balancing the checkbook, and reading the newspaper.) The mornings are the worst. Ugh!! I guess I will soon bite the bullet and actually get my eyes checked. That's not the scary part...when I do get glasses, my biggest issue will be picking out frames.
Posted by robin at 8/31/2009 09:51:00 PM 2 comments:

Somehow, I found motivation to clean today! Mmmmm! I love the smell of a clean house! LOL! Obviously, it doesn't happen as often as it should. There are a few problem areas that I'm still trying to iron out. I feel so productive as I planned several goals and then followed through. Of course, I had to stop several times to play Wolverine and the X Men, to hold the toddler as his gums were hurting, and help the preschooler with puzzles. We took advantage of the quality time together while his brother was taking a nap (as puzzle pieces can become airborne or chewed up otherwise.) It could have been done much faster, but what fun is that? The preschooler insisted on helping in the kitchen mopping and later, the toddler insisted on helping to mop in the bathroom. Hopefully, I can keep that kind of help up, especially when they get to be teens, lol! It was a great day!

In addition, I even took my mother-in-law to lunch. I have never done that. She was the kind of lady who didn't eat out much and always had a reason to stay home or order out. Now that she can't remember much, she didn't know she didn't like to eat out. It was a little stressful...not because of her but because of the two kiddos I had with us. I ordered her food I knew she would enjoy. She ate slowly and we were finished long before she was. Perhaps it was because it was habit...that we rush through the meal before the kids lose interest and get loud. I ordered a bowl of ice cream for the kiddos to keep them entertained while she finished up. She was quiet most of the time but made a joke that she didn't get any ice cream. We all laughed. I realized a little later that she actually wanted some so I ordered some for her as well. Halfway through her ice cream, she asked why she was eating ice cream. LOL! I answered because she asked for it and it was really good. She agreed and finished it up. Yep, ice cream definitely brings out smiles and makes life good.
Posted by robin at 8/30/2009 10:46:00 PM 2 comments:

Today is day 4. I'm on a diet and I'm finally working out. I got a membership at a gym and have been going there as well. I'm so out of shape that I can only do about 30 minutes at a time. I'm looking forward to feeling better and getting more energy though. I haven't tried to really diet in um.....fifteen years or so. I have noticed I'm so tired at night though, even more than usual. I'd be nice to fit into my clothes better...I'm keeping my eye on the prize!
Posted by robin at 8/28/2009 09:51:00 AM 3 comments: 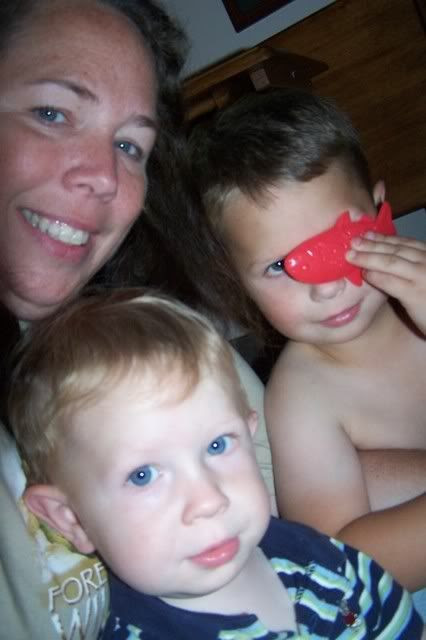 I often go see my mother-in-law in her apartment (at the assisted living facility.) I went today because I received a call that she bumped her head while falling early this morning and it was protocol to have her go to the hospital to get her checked out. Her head was fine. I called her before I went and she addressed me with my name and asked me to go visit her (and to bring the boys.) I had intended to so the toddler and I went and visited for a while.

I have pictures all over the walls for her. One thing I made for her has all of her kids names and pictures of her kids in order (vertically arranged on the wall.) One picture is of my husband (and the toddler) that is at a lever where it can be seen and touched by little ones. Of course, my toddler went up to it and was pointing to it, saying da-da. She didn't seem to notice. I hinted that the picture is of his dad (and said the name.) It was then that I realized that she didn't know who I was referring to. She read off all the names and then said she wasn't sure which picture was which (even though they were clearly arranged in such a way that it seemed obvious...and she used to know.)

So I asked the hundred million dollar question. I asked if she who I was related to (from the pictures on the wall.) In other words, who am I? Does she know anymore? And the answer, no.

I am a very kind person who will continue to visit her and bring little boys to visit and slather lotion on her hands, wash her clothes, keep her company and talk about the clouds in the sky. I changed the subject as to not make her feel like it mattered that she really didn't know. She mentioned earlier in the week when I visited that she saw me pass by and thought I was the Angel Gabriel and was so happy to see me. I took that as a compliment.

But as I walked out of the building toward my car, I noticed my eyes were a little wet. It's so sad to see so many memories fade away. I wish this wretched disease on nobody and wish there were a cure.
Posted by robin at 8/21/2009 02:43:00 PM 3 comments:

A few days ago, my family and I met a friend at a local restaurant. While we were eating, we heard the lady at the next table talking to her friend. She had a kind of a loud voice and her vocabulary included lots of profanity. I was amazed she didn't notice that we were staring at her or that there were kids around. My daughter decided, in her anger, that the best thing to do would be to cuss the lady out. I told her that she would then be just as bad as the lady was. So then I was stressing about keeping my daughter's rage under control as well as being angry at the patron near us. As it turned out, my husband took our little ones to the playground located down the hall (of the mall where the restaurant was located.) My daughter then left as I was getting ready to pay the bill. The foul mouthed lady actually got up to pay and was right behind me in line. For the life of me, as much as I wanted to say something to her, I couldn't even open my mouth. I have thought about it so many times since then about what I should have said to her. She was discussing her drinking habits with the guy she ate lunch with and I thought to myself that her whole demeanor and tone probably meant that whatever I said wouldn't have phased her a bit. But, I am still kicking myself for not having found a way to diplomatically urge her to notice next time who was sitting near her or to talk quieter, or anything. Ugh!
Posted by robin at 8/16/2009 01:44:00 PM 2 comments:

This past weekend, we had a party and celebrated our twenty-fifth wedding anniversary with our family and friends. It was a lovely day and we had LOTS of food! It was wonderful to see so many people come by and say hello. We extended the event to last all day so anybody could come by for a few minutes or to stay all day. We are very blessed! The next day, we were SO tired. The house was a mess and we just rested a lot. At one point, I looked down and the toddler was sitting right in the middle of the empty steam table pans. Rather than get him out, I reached down and grabbed my camera! 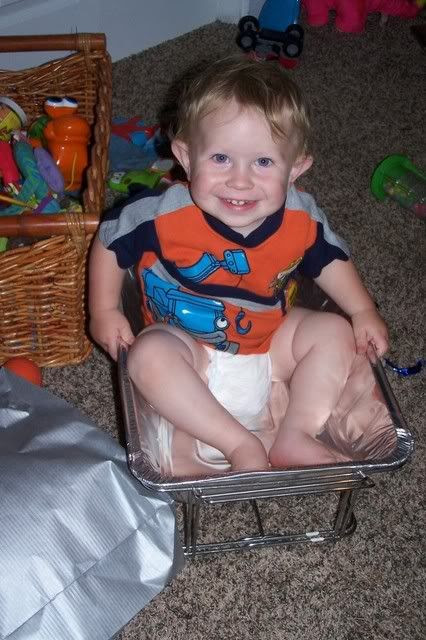 For more fun with SOOC Saturday or to participate yourself visit Melody at slurpinglife.typepad.com
Posted by robin at 8/15/2009 07:47:00 PM 10 comments:

My preschooler is in the bathroom doing his business reading his ABC book while his toddler brother looks on. My husband is sitting on the side of the bathtub reading the newspaper keeping them company. 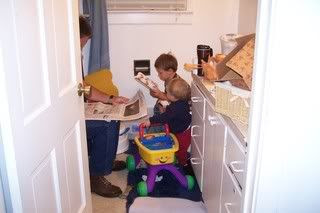 We went to the beach this week for a few hours. I had forgotten how the sand feels after you get wet and the total stickiness (is that even a word?) Since I had to be so close to my youngest, I didn't go looking for shells or beach treasures. I just watched them enjoy a different sort of playground.

Naturally, the kids were so busy playing that they didn't want to pose for any pictures and just wanted to play. I enjoy this picture because my smallest just sat for a while and watched the waves.

And, since there were storms in the area, the waves for larger than normal, and it was fun watching them come in and out again. Here, my preschooler just lays in the water as the waves go back and forth over him.

And my favorite...crawling out to sea.