I have a friend who kept requesting I play a game with her on Facebook. Since I was already doing an ongoing game, I ignored her requests over and over. Finally, I thought, why not? So, I tried the game, Words with Friends, with her. It was so much fun! It was like Scrabble and you could play as slowly or as quickly as you wanted. When my boyfriend (now husband) and I were young and I was still living at home, he'd come and hang out at the house. We'd often play Scrabble so I have great memories of the game. Of course, I was 16 at the time too! It was many years later when I gave him the game as a gift (Christmas or birthday?) that he finally admitted that he really didn't like the game and that he was just being nice. It might have also been that he disliked it so much because of the fact that I won most of the time too. Nevertheless, even though I don't play well and don't know many of those cool words you need to use to get the most points, I love playing. As soon as I started the game with her, a former high school classmate started a game with me. I think that when you start a game, there's something put on your wall so that it shows up on the news feed so others can see it too. Then, a distant cousin I've never met started one as well. Suddenly, I was getting lots of invitations to play. Within a week, I had finished three games and was in the middle of five. There are those who do a word or two a day and others who have time to do several. I had one game in which a former neighbor and I played back and forth until we finished. It's all so fun and I'm learning a lot of new words! Who knew that there was such a word as 'qi?' I do now! 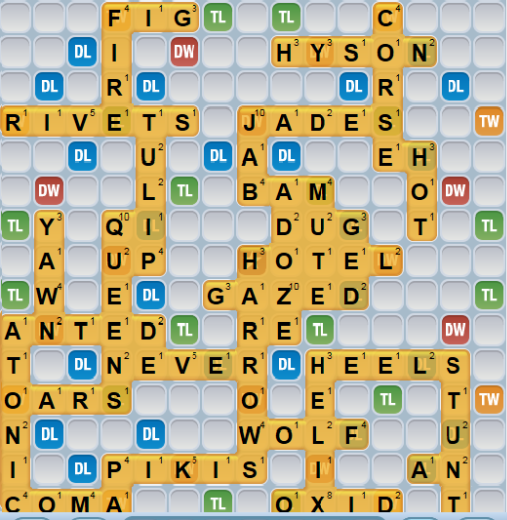 I have to drive my kiddos back and forth to school every day (and they get out at different times.) so I do a lot of waiting in the car pool line. One part I look forward to is the quietness, that is, if I'm alone. I have read more books in this last year than I have ever before. And so I sit. I have my book, my drink, and my reading glasses. Nowadays, I can't go anywhere (or read anything) without them! As I allow a little breeze blow through my car door windows and hear little voices in the foreground, I am reminded that time passes in a blink of an eye. These kids (like my older ones who have already grown up) will be growing up way too fast.
Posted by robin at 1/27/2012 03:33:00 PM 4 comments:

It has been the plan for over a year to move my mother-in-law from her assisted living facility to a nursing home (and applying for medicaid.) She makes $2K a month but half of that comes from the VA and would not continue if she were in a nursing home therefore her income would be around $1000. Without a break, the cost of her housing and care (for her level) would be about $4500 a month. We had paid around $3500 a month for 2010 (with most of her adult children picking up the tab of the balance each month.) We really couldn't afford it anymore.

But as the year was ending, I was becoming more sad about the move. I procrastinated in finding a suitable place to move her. I did finally make some calls but was dreading the upcoming decisions. The place where she lives is wonderful and the staff that care for her each day are awesome! One even teared up as I discussed the possible move. That's not easy to find...people who are so caring.

Finally, in mid-November, my sister-in-law (one of my MIL's daughters) called and said she felt the same way I did. She suggested I call one more time to see if we could negotiate a deal to allow her to stay a little longer. Yes, we could have moved her and not paid anything but she's happy there, knows where her dining room chair is and seems peaceful. Moving someone with Alzheimers is stressful on them. The less stress, the better.

We communicated back and forth, between local offices and headquarters, through my initial staffmember to the final supervisor who today (after 2 months but better late than never)...gave us the number we could afford. It'll cost us about $2700 month. What a blessing! We can keep her there one more year!!! I feel SO good about this and know that I will be able to sleep better at night now. It's incredible that we can put off this inevitable move at least 11 more months! 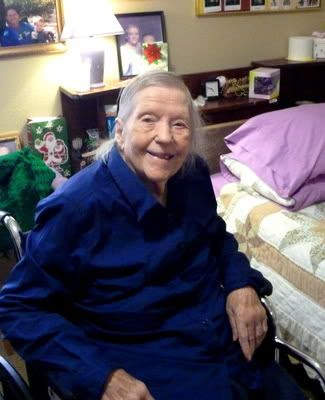 A couple weeks ago, my MIL celebrated her 89th birthday. We brought over a little cake for her to eat! She'll smile at the camera if I take the picture because I smile at her and she smiles back. I tried to get my son to take a picture of she and I but she wouldn't look at him or the camera but looked at me next to her instead. I did get one of her and the boys though with her birthday cake which she loved. It was so cute hearing my 'lil ones singing Happy Birthday to her. I fixed her a spot and left a few minutes to check about her looming contract. When I returned, I realized that she wasn't able to eat very well by herself (the table was kinda low) so I fed her the rest. She just loves desserts and particularly, birthday cake. It's another blessing that she lived another year and could celebrate another birthday. 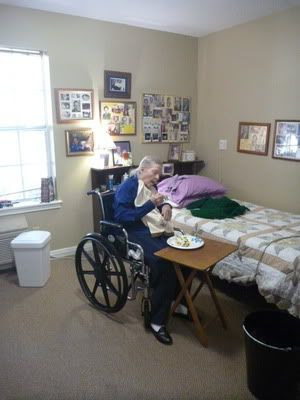 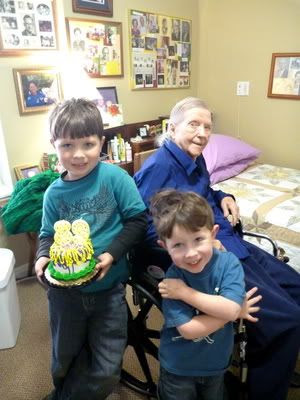 Where have I been looking?

I thought I was someone who noticed details. Obviously, I don't notice as much as I thought I did. I'm much better at noticing other's expressions or moods than I am at observing the environment. Why am I even mentioning this? Because lately, as my preschooler's vocabulary explodes, he points out many things in which I have never paid attention. As I went to get my allergy shot the other day, I took him with me. He got so excited when he saw the breaker box outside mounted on the side of the building. He proudly and excitedly announces, Look, it's a breaker box!! Who is this kid anyway, lol! I mentioned to my hubby a few weeks ago that he starts asking questions as soon as he wakes up and finally stops as he goes to sleep late at night.

One segment of time today...
I pick him up from (pre-k) school and as soon as he gets into the car, he starts asking about the vent in the dashboard in the car. Is that a vent? Each time he gets in the car, he asks about the vent, the buttons, the light, and the radio button. By the time we get down the driveway to the road, I've reinterated what he already knew. He asked whether something was (it's name) and I said that it was (whatever it was.) As we turn onto the road, today's focus of attention were drains. While driving down the curb and guttered road, he pointed out the first drain (those cut out spots covered by a manhole on the edge of the road.) I have never really paid attention to them. He asked, Is that a drain? Yes, it is, I answer, over and over. There were so many... I started pointing them out to him before he began asking and he'd giggle. As we drive, he also points out his favorite things to me: cellphone towers and cameras on traffic lights. Between those, he also asks, What does that sign say? STOP. What does that sign say? Speed Limit 45 What does that sign say? Target What does that sign say? No Parking What does that sign say? Dunkin Donuts. Wait, go back, go back! Apparently, he saw something he wanted to show me but I passed it up. Nope...not going back! I distract him by showing him a concrete truck (although it doesn't last long.)

I love his little voice asking questions. I know this phase won't last so I soak it in until it passes. Sometimes it's frustrating when he stops mid stride and won't budge until I answer his questions. He looks up in the entrance of a restaurant, for example, and it starts...he points out every fire or smoke alarm, every fire pull station (whatever it's called where you pull if there's a fire,) each security moniter, every fire extinguisher, each vent in the wall or ceiling and each speaker where sound comes out! And that's what he sees before we're seated. It's almost as if he sees the things I miss. I just have never noticed the things he loves. 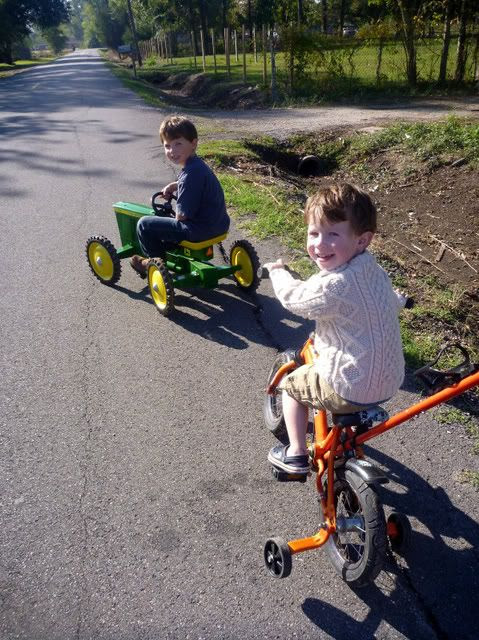