For many years, I've wanted to build a treehouse or a treefort for my kiddos. I had collected plan after plan for seasons on end. When I moved four years ago, I tossed them because I figured I would never get around to eventually doing it. A couple of years ago, my younger brother put a piece of plywood on a couple of limbs of a tree (that I helped plant when I was a little girl.) He and my kiddos climbed up the swimming pool ladder and sat on top of the board and loved it. However, I was afraid that one of them would fall off backwards and get seriously injured or die. So, I needed to rectify that or take the board down. After some long indepth browsing on pinterest, I decided on what I wanted up in the tree (even though I wasn't really the carpenter type.)

So a couple weekends ago, we started the treefort project. First we had to cut down some limbs (which led to cutting down other limbs that were dead and needed to be taken down as well.) The piece of plyboard can be seen in this picture (I forgot to take a 'before' picture.) 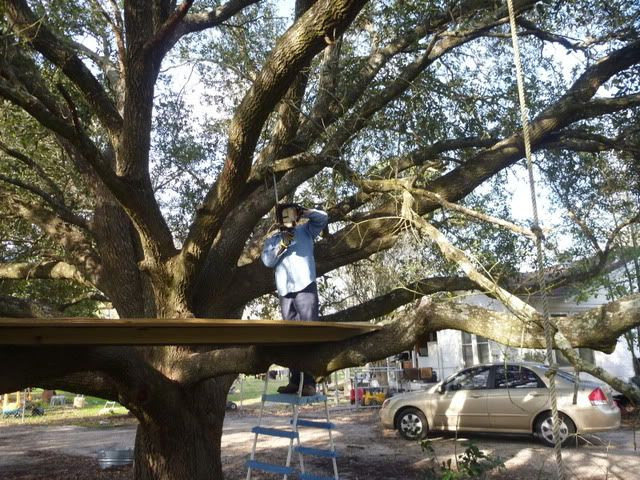 Then we cut the limbs into smaller pieces and hauled them out to the road. 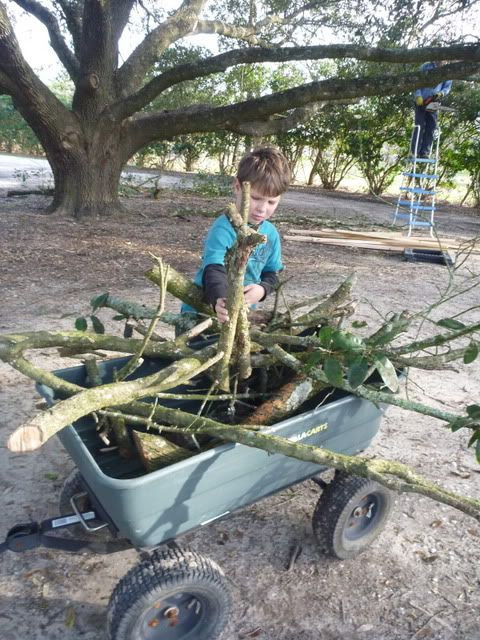 Making sure the plyboard was level. 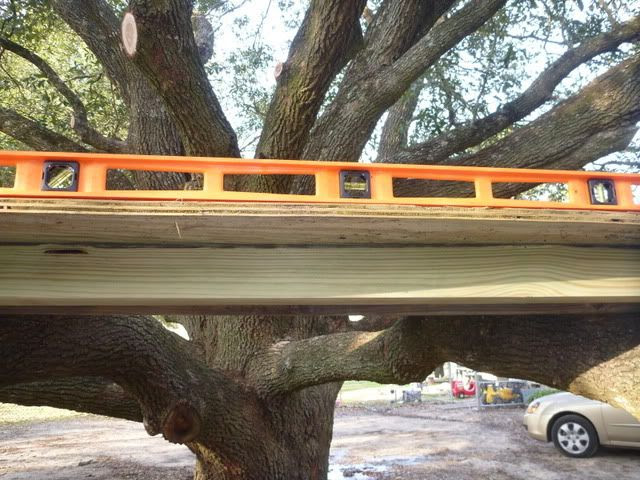 We made the frames for each side. Since the plywood was a 4x8, I put the middle boards 2 foot across. Note to self, if you splurge on a nail gun, spend the extra money to get a really good one (ours kept jamming and took so much extra time between each nailing of each nail.) We learned our lesson. 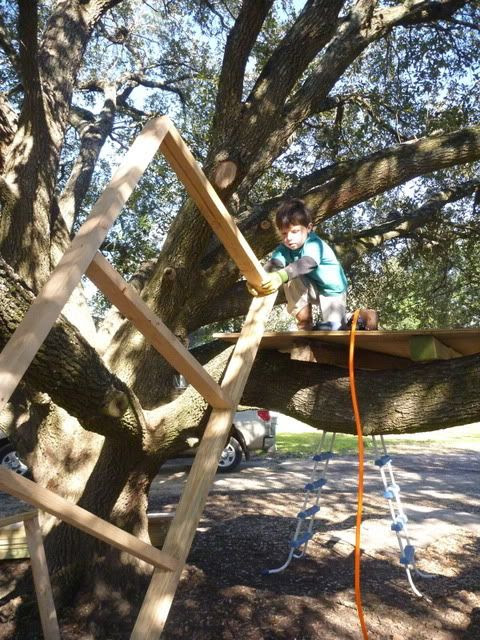 Then we clamped each side down until we nailed them down (and made sure they all fit snugly.) 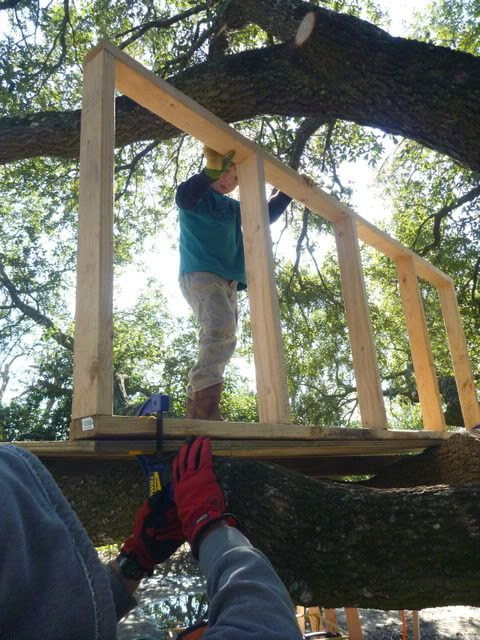 In addition to nailing down the frames, we also used these things to secore the frames to the bottom. 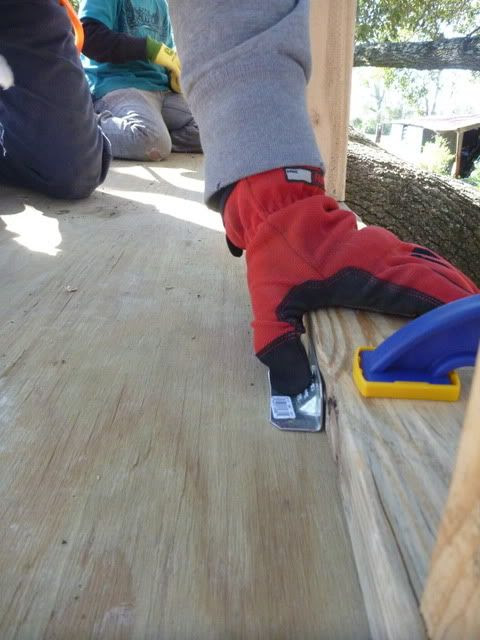 All four sides are now up. We left a gap on the side closest to the tree to allow room for the ladder (to get up and down) as well as the kiddos to climb out onto the limb (when they're older.) 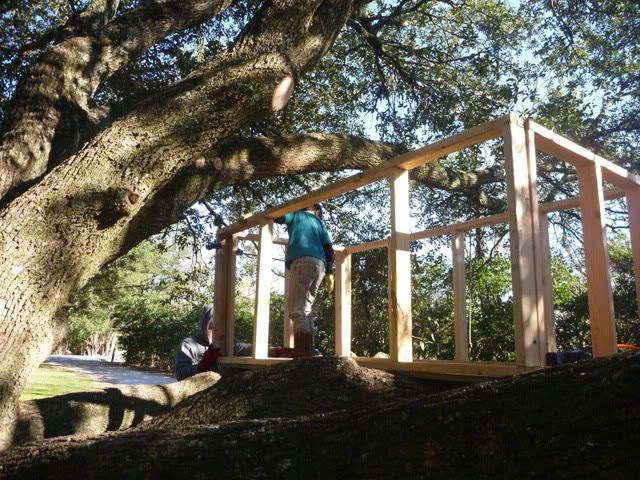 We used a compressor to use for the nail gun. The only issue was the weather. It was cold and it took a long time to get the compressor going (and stay going.) 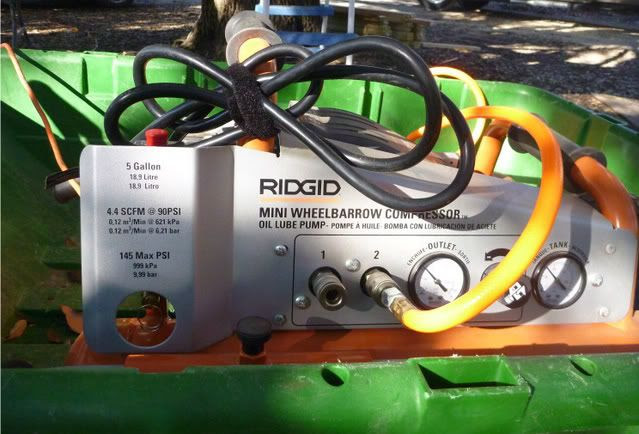 We bought picket fence boards to put along the sides. However, we needed them a certain length and had to cut each of the 48 boards. Of course, it was a labor of love. 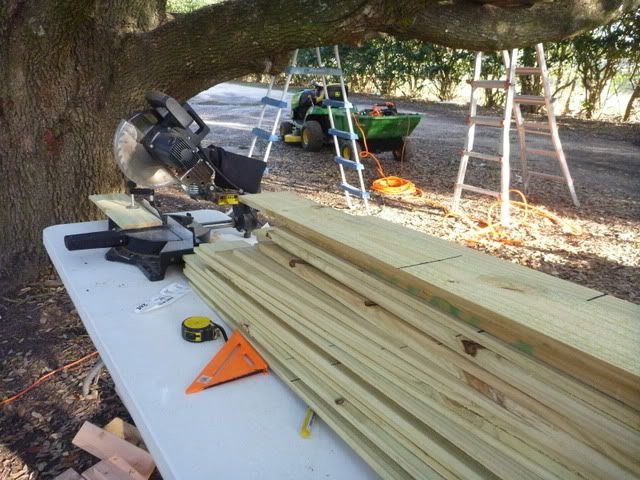 Starting the sides. Luckily those Christmas hardware store giftcards came in handy! We got all the clamps and most of the boards with them (we had a stash of them!) It was definitely a family project. 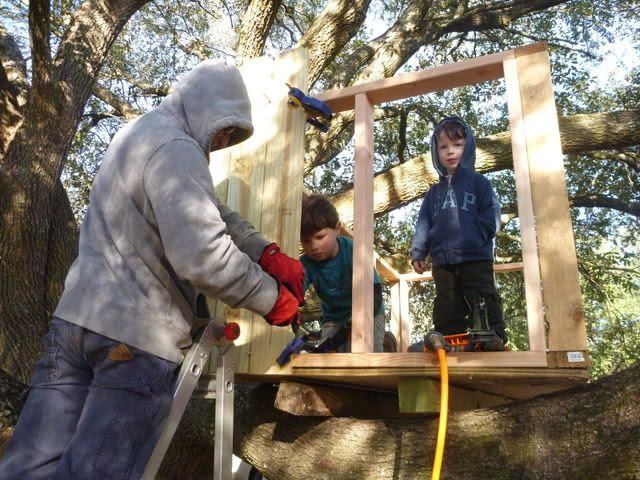 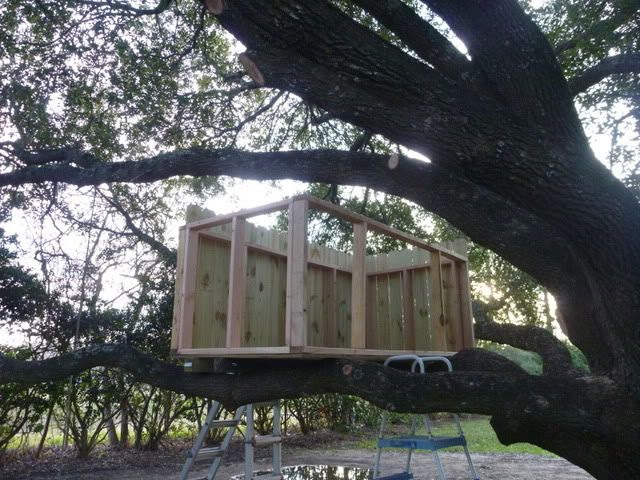 There were a couple of places where the boards didn't fit exactly. We also cut the length of the picket boards to fit in those places. We didn't know what to use between each board either and used a pencil to mark each space inbetween them. View from one side of the finished project. 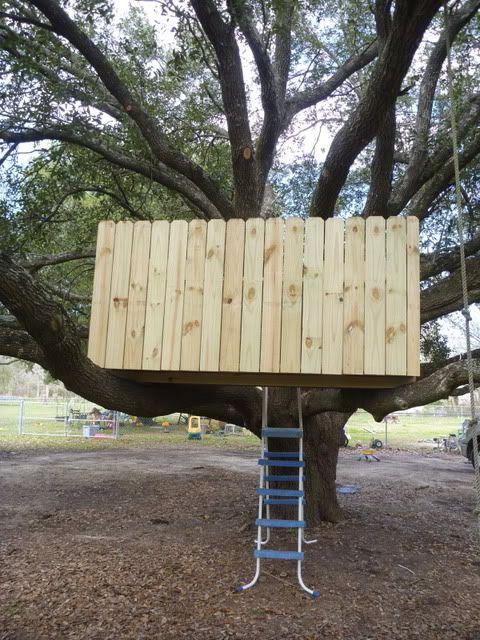 And from the other side. We let my son decide how big the space was going to be. He also determined the height of the picket boards themselves. He gave us a lot of input and was a great help the whole way through. 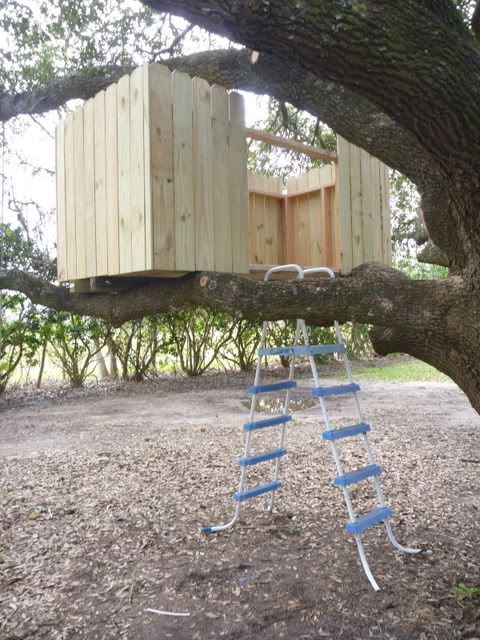 I love this holiday...especially getting my young kiddos ready for their class parties. Perhaps it's the chocolate I love! I am always reminded how special the day used to be when I was young and my dad would give me a candy valentine full of little chocolates. The night before my youngest son's party, he was signing his name (or initial) and picking which valentines go to which classmate. It was a nice calm happy evening. 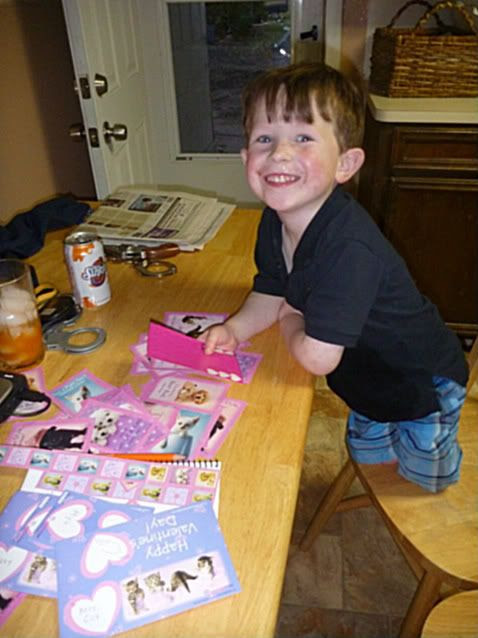 Of course, the next morning, it's a different story. Apparently, he decided to color his arms (this is the second day in a row...I found his stash of markers and hid them!) 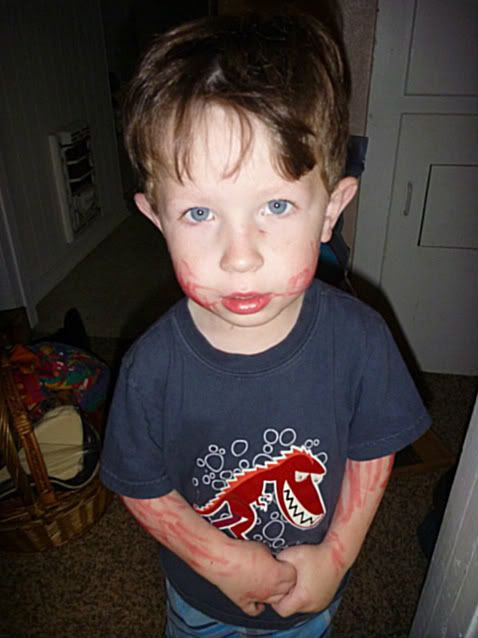 But later, he was his cute self again at his class party. Of course, it'd would have been better if he had smiled before the picture was taken instead of the moment after the flash went off, lol! 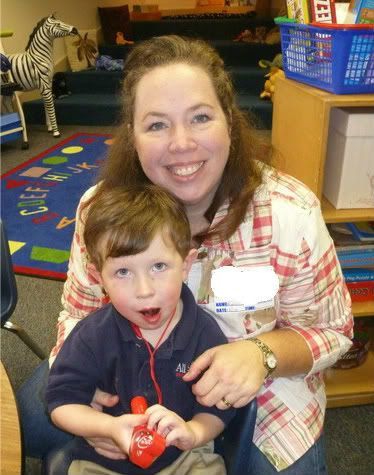 But I managed to get a decent picture after all. 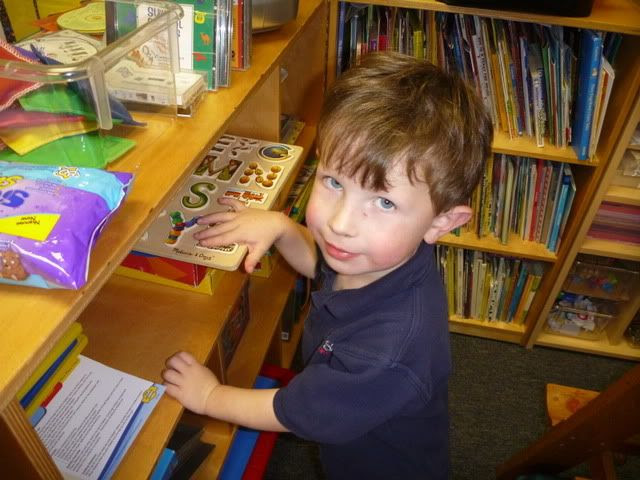 The Miracle of Hearing Aids!

Background: My hubby has always had issues with his hearing. He blames it on his older brothers very loud music as a kid. In school, his teachers noticed he was a different kid when his seat was closest to their desks and had his hearing tested (yep, hearing loss.) Fastforward a couple decades, I noticed there were certain kinds of phones we couldn't use because he couldn't hear them ring (as his loss was in the high frequency range.) As we had kids, if he couldn't hear them, I'd repeat to him what they said. It's happened so smoothly that I didn't even notice I did it. The main place there were issues were when we were riding somewhere and he were driving (he coudn't see them or hear them) so I'd tell him what they said. We were always the 'loud family.' Even as I grew up, we were loud. After I married, it was the same. Hubby always says, 'turn it up' when watching tv. Even my older girls are loud, lol! Again, thought nothing of it. Hubby is one of those people who can hear a helicopter coming from miles away and always hears things I couldn't (or didn't really pay attention to.)

Present: Hubby's ear clogged up with earwax last week. He asked me to make an appointment to have it cleaned. I made an appt. with the same doctor I had used at the local Ear, Nose and Throat place. I filled out the paperwork for him (and checked those boxes he'd had issues with in the past such as hearing loss) and made a map of where to go but still, he really wanted me to go with him. Since it was more fun than cleaning at home, I went. Initially, his ear was cleaned and he could hear so much better. But before seeing the doctor, they wanted him to have a hearing test. He has a yearly test at his work (hearing prevention program or something like that) but figured, why not. Then we saw the doctor who explained what the test meant. He had a 75% loss in the high frequency area which means that he could hear a man's voice (and therefore had no issues at work) but couldn't hear the high frequencies such as a female voice or kid voices. Wow. Then the doctor said that he wasn't going to push for hearing aids but that he just wanted him to know that they'd make a huge difference. He had himself just got some the month beforehand. He took one out and showed us (after we showed interest) and I asked how much it cost etc. When the doctor mentioned how much more he can hear and that he can now hear the birds sing, my hubby really showed interest. It was something neither of us had ever considered. They checked out insurance and referred us to another place. The place happened to be the place where I took my mother-in-law to get her hearing aid about 10 years ago. We called and made an appointment for a few days later.

Yesterday: We had an appointment at 10 in the morning and went to the place to check out the hearing aids. We were interested in one similar to what the doctor had (even though it was at the top of the line, he said.) As it turned out, our insurance covered 90%!! Actually, hubby had mentioned that if it hadn't had covered it, he wanted to get them anyway (it would have taken up our savings) so we were thinking that we'd get an idea of how much they'd be and how long it'd take for them to be made. As it turned out....within an hour, he had them! It was incredible watching him. I had absolutely no idea that there was so much that he had been missing! Watching his eyes as they darted around as he heard the noises in the office and the car afterwards was priceless!! He kept saying, "Wow, I can hear!" I told him that it was like a miracle as he never remembers when he could hear that well and to all of a sudden be able to hear everything that other could all along. As opposed to my bloggy friend Rachel who could hear and then all of a sudden couldn't hear. When we got home, the first thing he said was that he could hear the wind blow. And that he could hear the rain hit the roof. I can't even explain how incredible it was listening and watching him as if he were in a brand new world. In the evening, he'd say, "I can hear him" when referring to our kiddo. Of course, the tv is now WAY too loud and all of us are REALLY noisy. It'll take us a long time to learn a new way to live...quieter.

I mentioned last night that I was sad that he was leaving for work this morning (he'll be gone 2 or 3 wks) and I'd be missing all his 'firsts' in his new hearing. He really loves his new hearing aids and said they're very comfortable. I can't believe how much he had been missing (or what exactly he hadn't been able to hear.) I'm so glad I went with him to his appointment and that we asked so many questions. I've haven't seen him this excited in a really long time, if ever.

This is hubby at lunch yesterday right after we left the appointment. You can vaguely see a thin wire from each ear but otherwise, you can't see them. 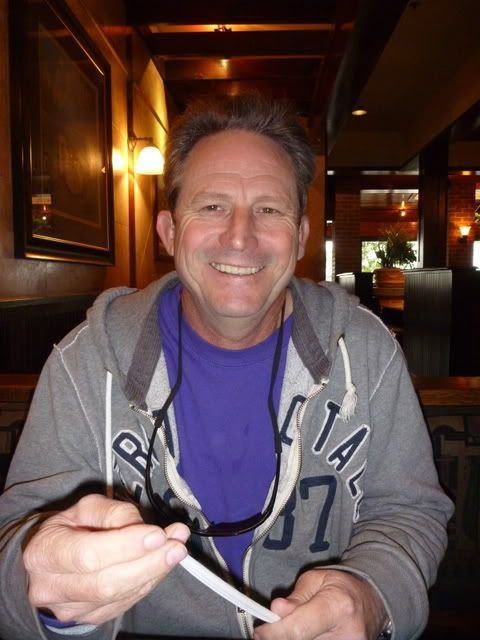 'Lovin it! Last year, we were in a huge drought and it lasted months on end. This year, it's the opposite. For days it has rained on end! My kids love it! I have a huge pile of wet dirty clothes and shoes on my back porch (I have the kids take most of them off before coming into the house keeping my floors dry and clean!) The mosquitos are EVERYWHERE!!! In taking a few pictures, I was covered and had at least 20 bites before I got back in the house. It has been in the 70s all week until yesterday evening. Here are a few pics I took while feeding the mosquitos. It is getting cooler as they play. 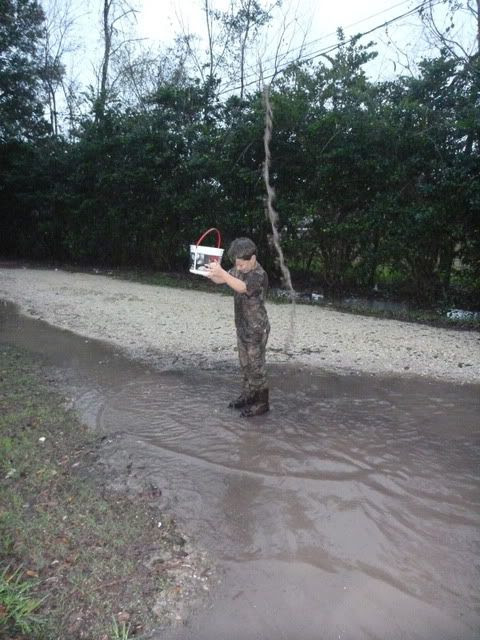 By the time I took this pic, the water was cold and he was just sitting, not moving, lol! He had some mud in his eye too. Warm bubble baths followed. 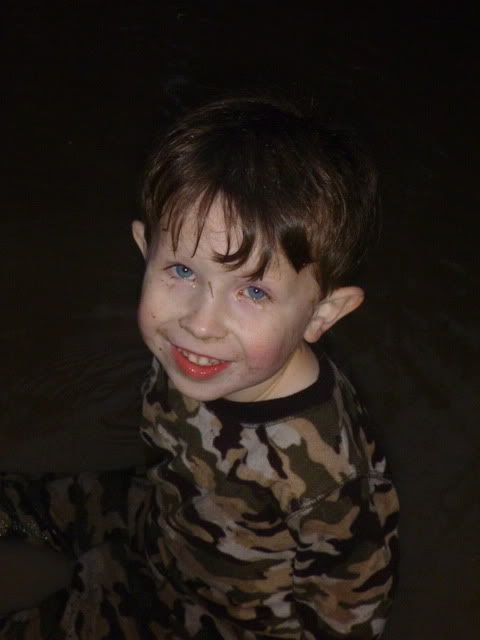 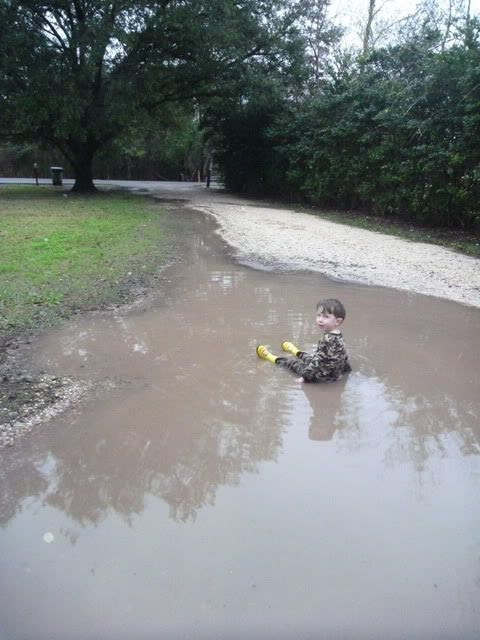 Why they insist on getting their hair muddy is beyond me! Must be a little boy thing!! 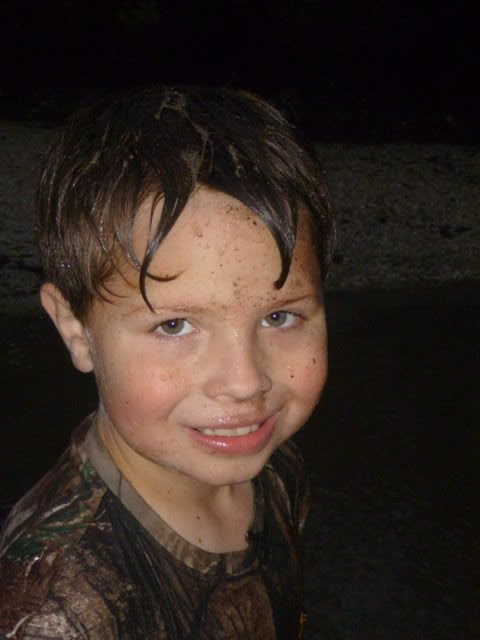 Today, as I write this, they just both came to the back door soak and wet! I helped get their freezing clothes off (as I look at the thermometer on the porch which reads 46 degrees) and then made a warm bath. Their feet and ankles are red and cold. Let's hope this is the last 'outdoor bath' until it's warmer! I am needed in the bathroom (and don't want huge waves splashing out of the tub) so I am done with this.
Posted by robin at 2/05/2012 11:02:00 AM 3 comments: