This summer, we started going to the library. I hadn't really taken advantage of borrowing books, even with my older daughters, and it a branch of the library was relatively close. So when the summer reading program started after the school year ended, I signed my kiddos up. I have been really good at keeping up with reading with my older son each night. Since he can now read books, I read one to him and he reads one to me (of course, his book is much shorter and on his level.) I love doing this and it's definitely saving me money! I want to continue doing this, even during the school year, and my kiddo has looked forward to choosing his books each night to read. Last week when we went there, my older son asked if he could go over and read to his brother. I said sure. I sneaked over and took this picture before they looked over. It was so cute watching him whisper the words to his brother... 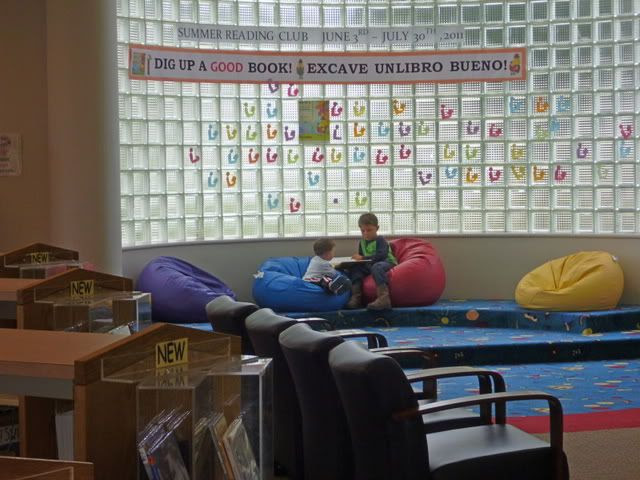 My older son LOVES alligators! He has been watching "Swamp People" on the History Channel and pretends to catch alligators all the time. I had heard about a place near a bayou that may have had alligators so we went there to eat. Lo and Behold, as soon as we got there, we spotted an alligator!!! 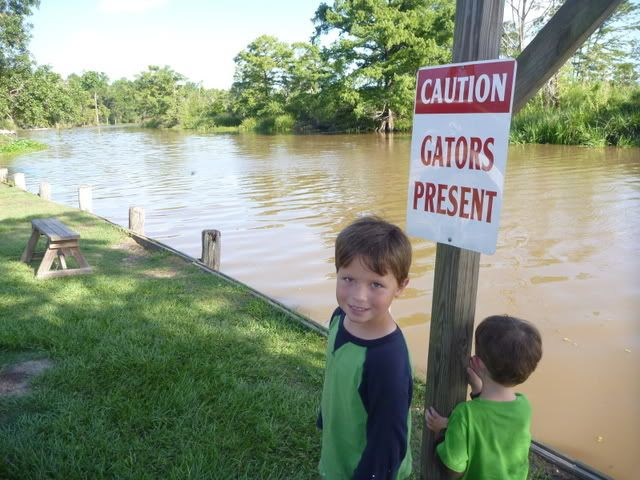 While we would have preferred to see a bigger one (like the huge ones on the show,) we were still happy to see a 'gator in the wild swimming in the bayou. 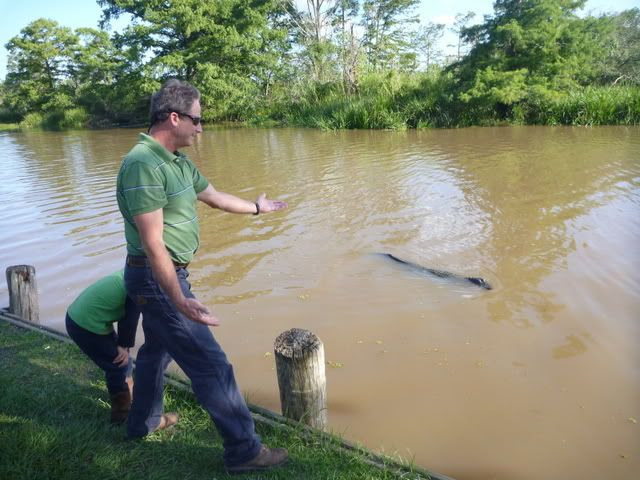 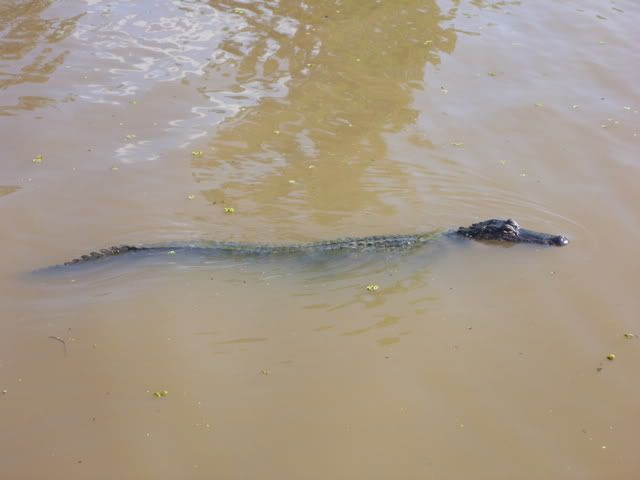 The place we went was actually a restaurant and boat dock. It was cool seeing all the wildlife in the bayou. There are two alligators in this picture. It was so fun watching the water waiting for a head to poke up! 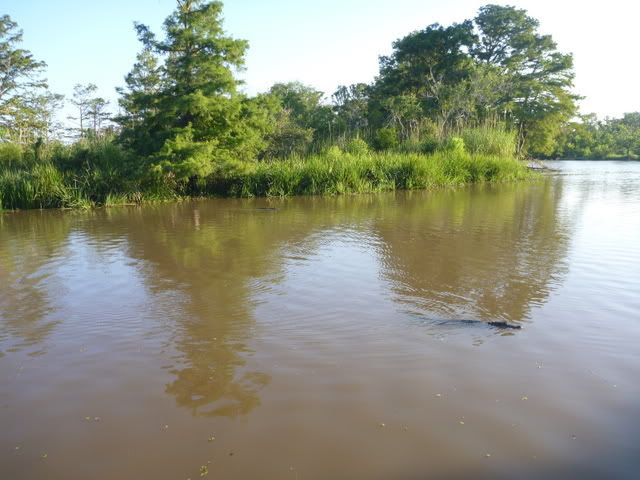 And....we were so close! We fed our leftover fries to the turtles (the alligators didn't seem interested) but what the turtles didn't get, the perch (fish) certainly ate quickly!! 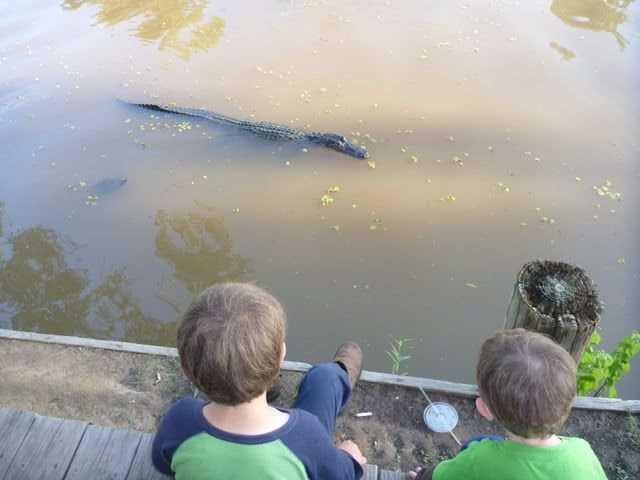 There was a cool cypress tree across the water (hard to see actually) but it added to the magnificent scenery! 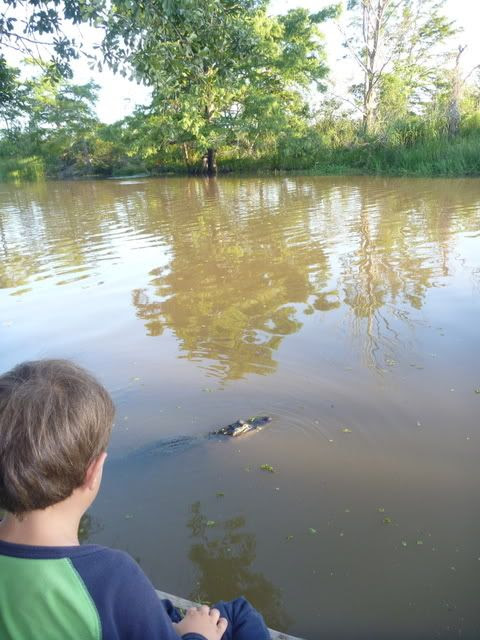 Aging and Winnie the Pooh

I had an interesting week. On Thursday, I went with my friend (who is almost 73 years old) to a Red Hat luncheon. What is that exactly? Well, it's where older women gather to eat and talk to each other and they meet once a month. They tend to wear red hats (or something red in their hair) and/or dark purple clothing. I remember buying my MIL a book many years ago titled "When I am old, I will wear purple." I supposed that has something to do with that. I am not old but can attend (but wear pink or lavender.) My friend thought it would be nice...and it was. It was a small group and there were eight of us altogether. The lady who sat beside me was also there for her first time so I didn't feel as 'new.' She said that she and her husband stayed home alone a lot and she wanted to expand her group of friends. She just sounded a little lonely. The conversations varied at this gathering. Across the table, my friend discussed with the lady next to her the recent dates with a friend of hers. My friend (whose husband died four years ago) hasn't really connected with anybody but this new person to whom she referred might be an option (or just a friend to go places with once in a while.) Another older lady mentioned the recent movie, Bridesmaids. I loved the movie but was a little embarrassed and was surprised that she also loved it (and understood so much of it.) BTW, it's a blunt movie involving friendships, sex and relationships. I think I'll go again just because they were nice women to be around and it'd increase my circle of friends.

On Friday, which was also my birthday (I'm now 45,) this same friend of mine and another mutual friend (who will be turning 60) took me out! We went to a nice lunch at a place I've never been with great food and we browsed a few shops in the same area. Afterwards we went to a movie (we all three go to movies regularly so this was a great excuse to go again.) It was a very nice afternoon.

Of course, I was feeling a bit 'old' after these experiences. I was excited that my son wanted to go see Winnie the Pooh at the movie theater. Winnie the Pooh was my favorite show when I was little. I thought of my own teddy bear as Winnie as well. My grandmother (who I only saw a few times in my life) apparently gave it to me when I was 2 years old. It was my favorite stuffed toy growing up. My brother would hide it all the time and I'd find it in the most curious places (hanging over the top of the door, in a closet, under a pillow) and it turned into a fun game of hide and seek. When my first daughter was young, she also played with it. By that time, most of the fur was rubbed off and it was missing an eye. It was kind of a velveteen bear because it was well loved. This is a pic of her and my bear (probably about 23 years ago.) 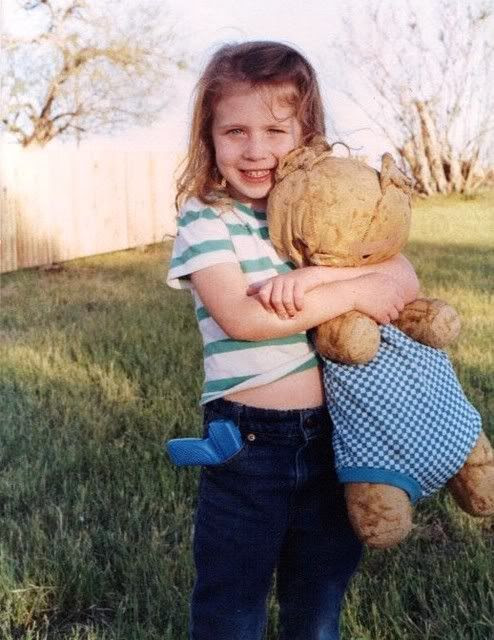 So, we went to see the movie yesterday. I felt like a kid again. I caught myself smiling so much during the movie. I noticed my older son sitting on the edge of his seat moving to the beat of a song...and at one point, during a chase, my younger son said "Run faster!" to the character running! It was a very fun experience that brought me back to my childhood. No longer did I feel old but felt like I did when my parents were alive, when I watched The Wonderful World of Disney on Sunday nights with my brother and when life was simple...and good! Feeling old, young, it didn't matter anymore...I was feeling happy!
Posted by robin at 7/17/2011 07:36:00 PM 4 comments:

We've been making daytrips lately while enjoying school being out for the summer. One of our favorite places to go is Galveston. I invited a friend to go with us (she always says 'yes' to invitations and, because she has a few boys that have already grown up, she's not scared off by my boys!) The boys love riding the ferry across the bay to the island. We stood in the front of the ferry feeling the wind on our faces...it didn't seem as hot that way...and watched for dolphins. We saw about five! Interestingly, on this day, probably because there were so many people because it was summer, when dolphins were spotted, you could hear the 'ooh' or 'awww' or some other noises depicting excitement! It was awesome to hear and experience.

We arrived shortly after lunch so we went to a restaurant along the wharf near the port. I let S pick the place and it was really nice. Of course, I ate shrimp, my favorite! ( I asked S to take this picture.) 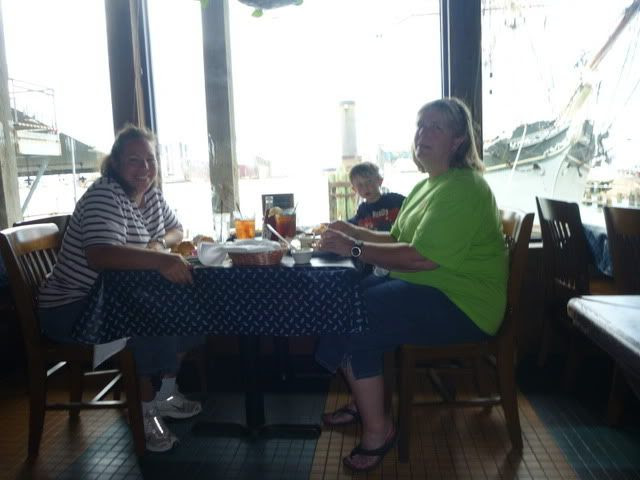 C, my preschooler, was so happy that the lobster tank was right across from our table and visited there many times! 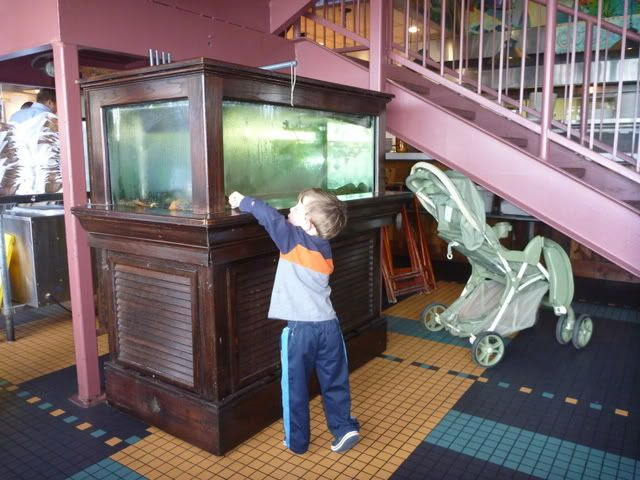 Right outside the window at our table was the Elissa, one of those ships you can tour. It was awesome to see such scenery! Beyond it were dry docks where ships and drilling rigs were being rebuilt. I loved watching the seagulls flying around as well as the fish nearby (their mouths were obove the water searching for food.) 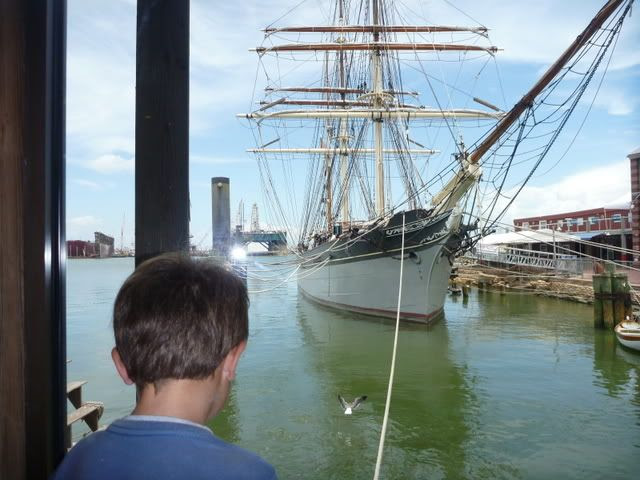 After lunch, we went next door to see a short film on The Great Storm, the 1900 hurricane that devestated the city. It was amazing! I didn't know how much effort it took to build the seawall that still exists as well as the city having to raise itself up to 13 foot in some places in order to survive future hurricanes. Walking along the stores on The Strand (an area where there are shops nearby) would have been less stressful without kids so we moved on to the beach to enjoy the afternoon stress-free.

We brought along digging toys and the boys had a great time. S found two little crabs and found many tiny shrimp that were left after waves returned to the Gulf. 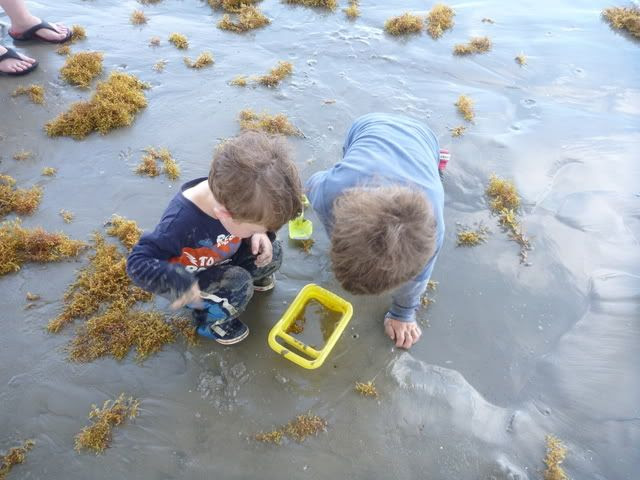 S loved running through the waves! C felt comfortable splashing water on himself. Behind him stands the Hotel Galvez (which celebrates it's 100th anniversary this year.) 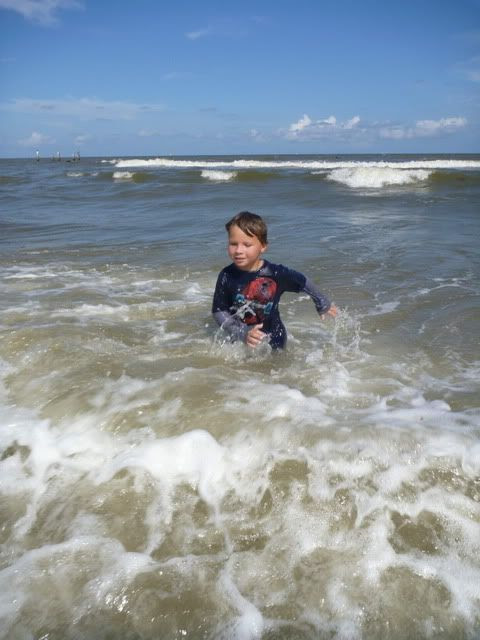 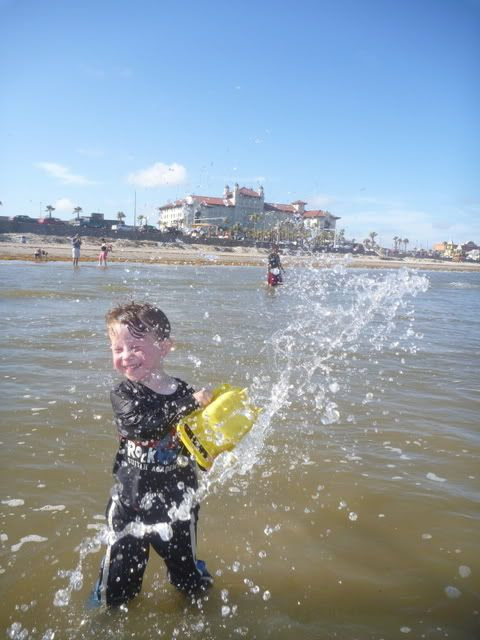