Bathtub woes... Yesterday afternoon, my preschooler decided he was stinky and wanted a bath. It sounded good to me although he wasn't really stinky. He played and played in there, loving it! I was getting hungry and popped out for just a minute to get a handful of peanuts. You know that feeling when you get when you hear something that you picture happening but know it can't possibly be happening. Well, I hear sounds of water being dumped. It wasn't a normal bathtub sound. As I walk toward the bathroom, I am continuing to try to picture what was happening. Lo and behold, as I get there, this precious boy is pouring huge cups of water onto the floor over and over. The entire floor is covered in water at least an inch high. How could SO much water be thrown out in so little time! Ugh!!!! I grab him out of the bathtub and put him in the hall in his time out place with a towel as I try to soak up the water as quickly as possible. In hindsight, I amaze myself in how composed I was when I handled my little water-thrower. It took all the towels I had to soak it all up. I had to move everything around, dry off what was on the floor, pick up the soaked rugs.... I remembered the big smile he had on his face when I initially went in there, probably proud of his accomplishment. After all the water was picked up and everything was back in it's place, I allowed him to get out of his time-out. When asking him why he did it, he said it was because he was done! (I had just gone out of there to get my peanuts after asking if he were done, he had said he wasn't.) But then, what should I expect from a 3 year old. Next time, I'll bring my snack in there with me. I reassured him that he can throw water out when he's outside in his pool, not in the bathtub....ever again!!!
Posted by robin at 8/26/2008 08:21:00 AM No comments:

Finally, preschool. I had put my preschooler on the waiting list for this particular private school when he was a month old. My city's schools aren't that good and the one he'd be going to in our neighborhood is just plain scary. I knew that if I hadn't gotten him on the list early, it might not happen.

But then, as the months wore on and he was getting older, I started getting sad. Even last year, I was getting teary eyed with the thought that he'd be gone three days a week. Was I doing the right thing? Was it too early? He had an interview with the school last January and I was quite ambivalent then too. But because I was pregnant, I thought he might want the time away from home to play with kids his own age, and that made me feel better. We finally got the acceptance letter in March. He was in! Oh, I was really feeling anxiety then, still on the verge on 'undecided.' After all, I could change my mind and not send him.

After the birth of his little brother, and the change in our daily routine, I finally understood that it'd be a break for me, and him. It would be alright. He'd survive...and I would too. It'd be ok. This preschool is expensive, it's a big chunk out of our budget and each year he'd go there would get more expensive. It was a big decision to send him and I spent hours debating the issue in my mind.

Last Friday, two days ago, the day came.......it was his first day of preschool (for 3 year olds) and we both did extremely well. I talked about what would happen in our daily stories at naptime and nighttime. It was the opportunity to discuss what his days would be like and what he'd do there. He was excited when he bought his backpack (green dinosaur style) too. When I took him to his class, he looked for his chair and sat down, happy as a clam. I knew he'd be fine. Neither of us cried, or even thought about crying. I am an easier crier and have cried when my previous kids entered kindergarten. But, it was easier than I thought.

He had a great day. Loved the lunch I made for him and enjoyed the class snacktime.
I think I made the right decision... 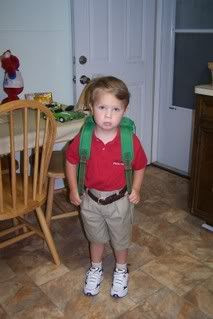 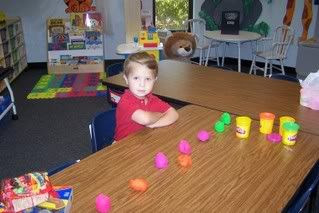 I just love this face. 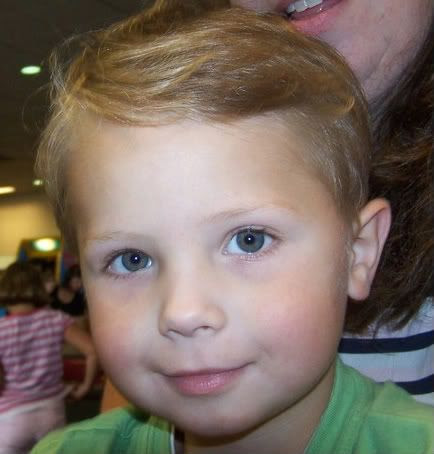 And the face of my little one too. 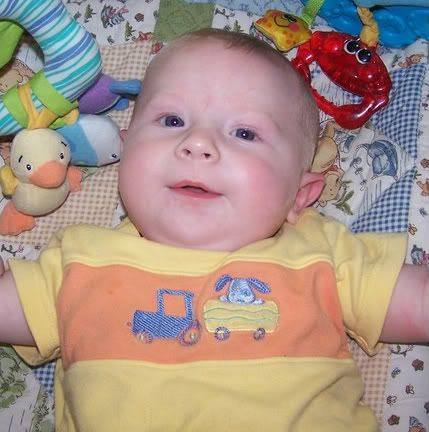 And, not to be left out, my younger daughter. 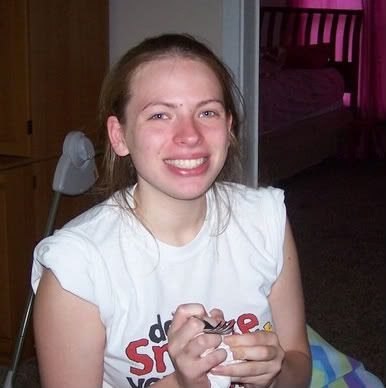 Tractor Man! Here's my preschooler - dressed to work! He's in his 'tractor boots,' backpack full of tools and his hardhat. He'd prefer to wear this everyday! 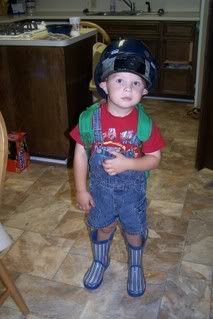 It's raining outside! We need the rain so badly...my house on piers moves when it's dry and doors start to buckle along with cracks starting to emerge on the wall. We placed a soaker hose under the house to prevent any major issues in the near future.

I love the sound of the rain...especially a good thunder storm. It sometimes brings me back to when I was a kid and I remember coloring in a new coloring book and the smell of new crayons. Such a simple memory...it's interesting how something so insignificant can remain for decades in my memory while something that happened last week is easily forgotten. It just means I'm getting a little older; hopefully, a little wiser too.

It's dark outside, I can hear the rain beating on the steps to the porch, and the sound of faint thunder in the distance. Life is good. What makes this even better is that the both kids are taking a nap and it's quiet inside too.
Posted by robin at 8/06/2008 01:56:00 PM 1 comment: