My second grader turned 8 in November. We planned a birthday party but it had to be rescheduled. Since hubby works offshore and is gone half the time and Christmas interefered with planning, his party didn't take place until this weekend! He was really excited to have a skating party. It was two hours of great skating, lots of friends and fun for him!!! Hubby skated as did little brother! I handed out tickets as his friends came, watched out for falls, took pictures, helped lace up skates and passed out pizza. On the way out, I took this picture! My younger daughter was on the way out the door (so you can barely see her jacket as she didn't want to be in the picture.) Hubby is holding the same skates he had some thirty years ago when I met him. 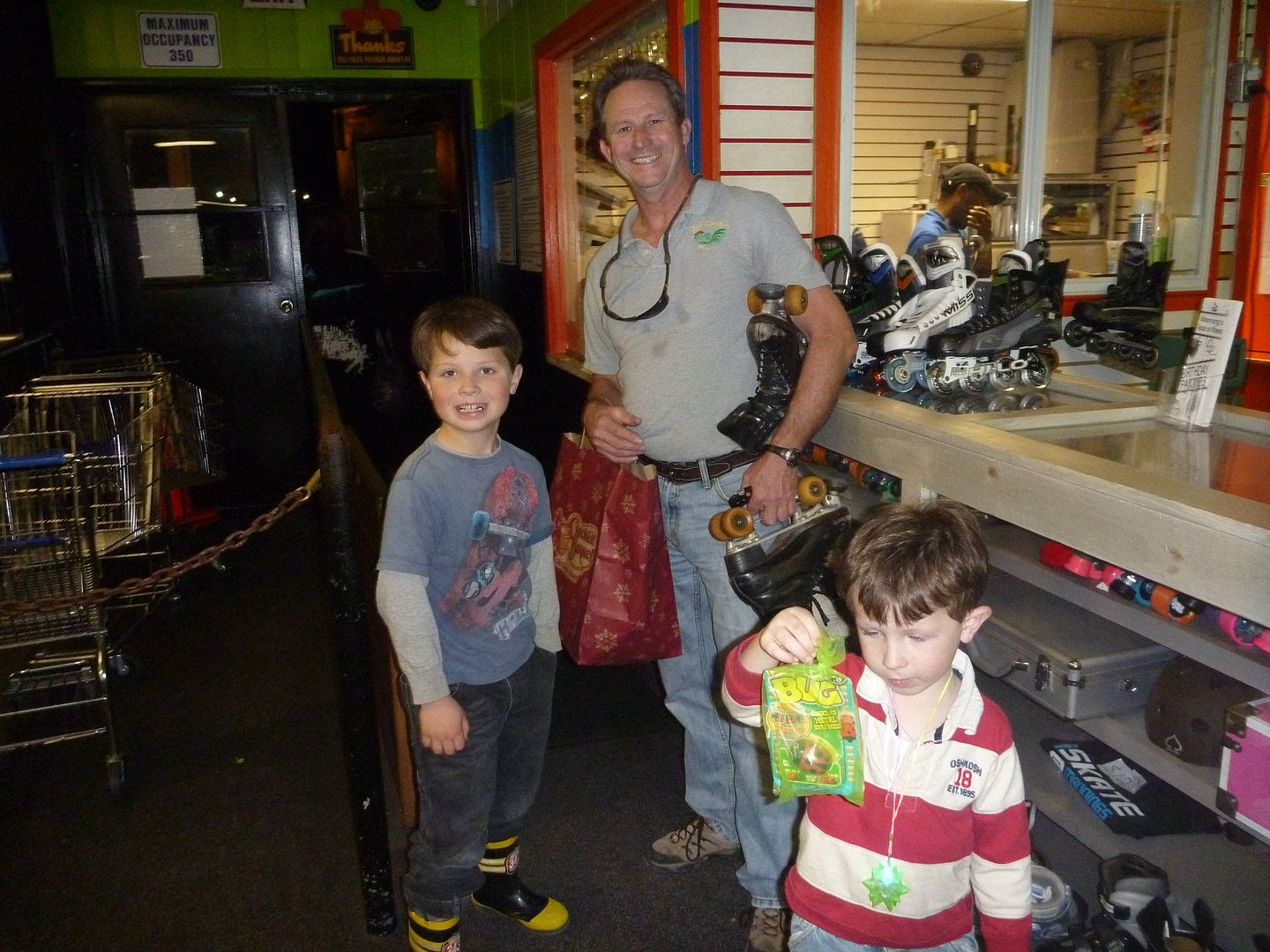 My kiddo helped pick out his cake too...He knew exactly what he wanted. He explained to the bakery lady what he wanted it to look like right down to the color of the trim and explaning that he wanted the plastic trees to make it look like a forest. He wanted a hunting scene. I went out and got the decorations for the top (hunters with crossbows and rifles, flying and sitting ducks, hunting dogs, lots of male and female deer, a rabbit and an ATV.) After the fact, I should have taken the picture from a lower stance as it's a little hard to see from that level. He was extremely happy though and that's all that counts. We only have a party every 4 or 5 years or so (the kind in which you invite friends) so we wanted to make it memorable. It was! 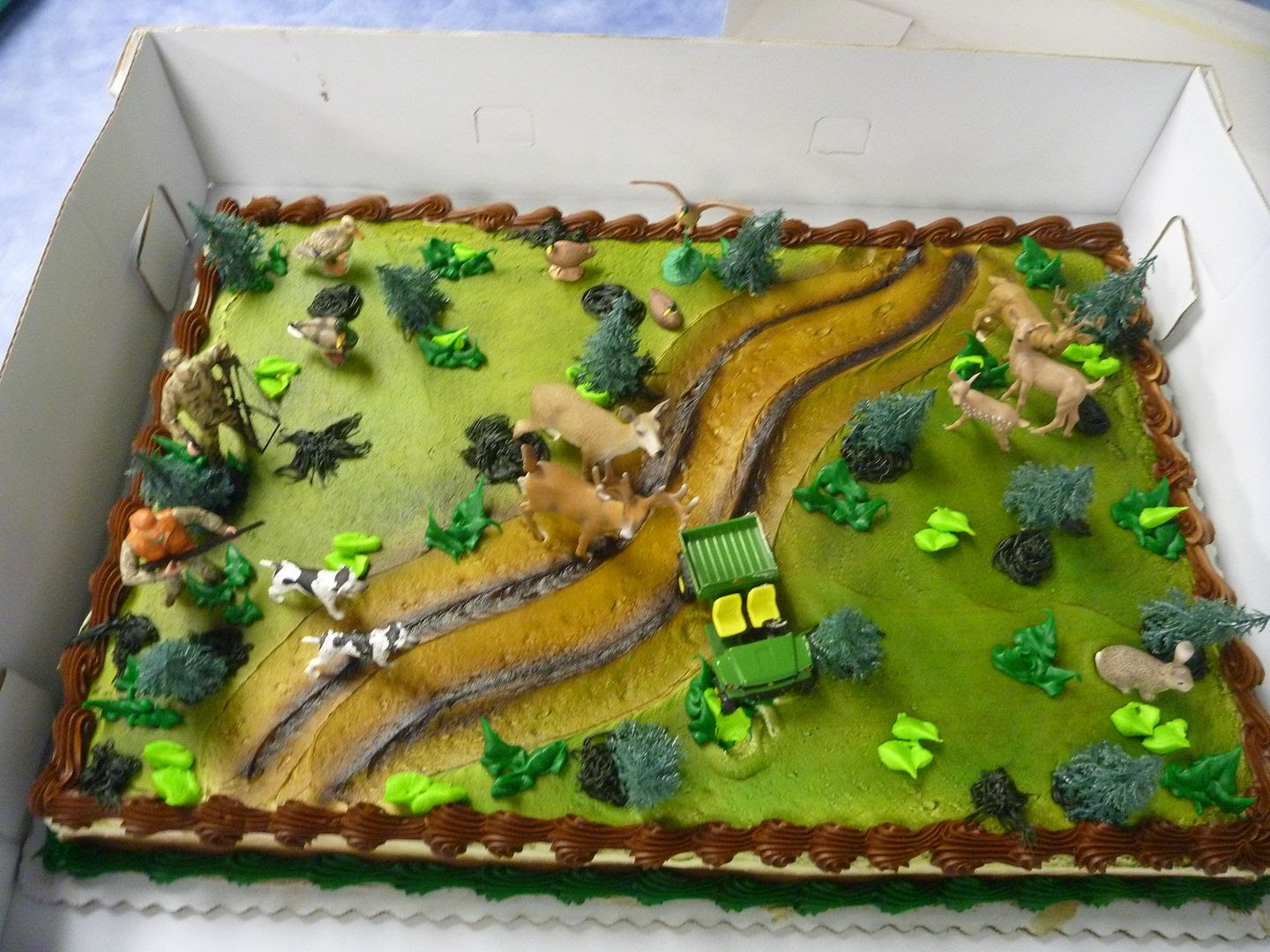 I love this grandmother stuff! I can go and help out and then go home at night! I have time to regenerize and not have to worry about when I can take the next shower. Of course, being an experienced mom, I've learned some things to do to make my time more efficient that my daughter is just now learning. I'm trying to do those things people mention you should do...like not offer advice unwarranted (this one is hard for me, lol!) I find myself doing things for her without thinking such as packing items on the way to a doctor office and then she is looking for it (I should have let her do it.) She's becoming a better mom each day. I love that her sister (my younger daughter,) her boyfriend's family, my immediate and extended family, and her close friends all come together to support her and help her get from one day to the next. Nevertheless, Olivia is 3, almost 4 weeks now and all is well...today. 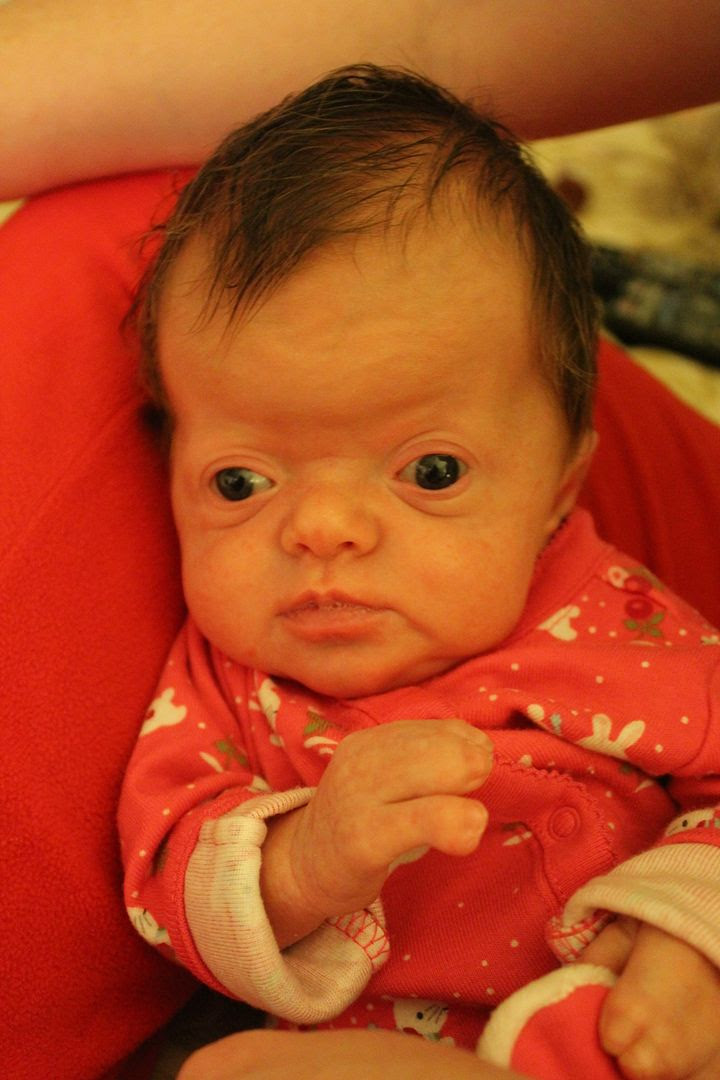 Right before Christmas, we drove to Arkansas and spent a few nights at White Rock Mountain State Park. We had gone there a couple years ago and when DH suggested we go, I didn't hesitate (I usually make all the trip or travel plans and was ecstatic!)

It was COLD! There was a small heater in the bathroom (there was electricity) but the rest of the cabin was warmed by fireplace. We have never had one and it was very fun putting the logs on, stoking the fire and just smelling the different smells from it all. When we woke up and were too cold to get out of bed, my second grader offered to help out! I felt like Tom Sawyer when he asked to help...sure, go ahead and get the ashes out, ok...if you insist, you can go outside on the porch and get the logs....oh, alright, go ahead and light it. We just stayed cuddled up until it was warm in there! And the weather outside was even colder! There wasn't any snow but it was extremely windy so it felt much colder than it was! 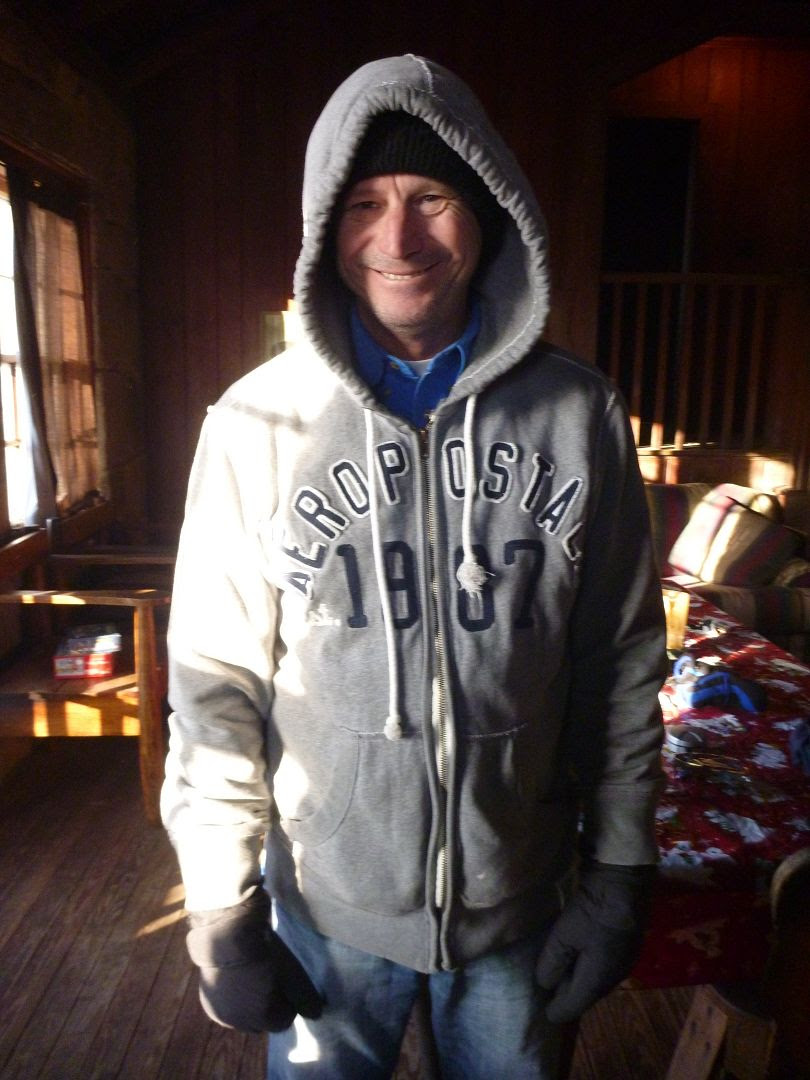 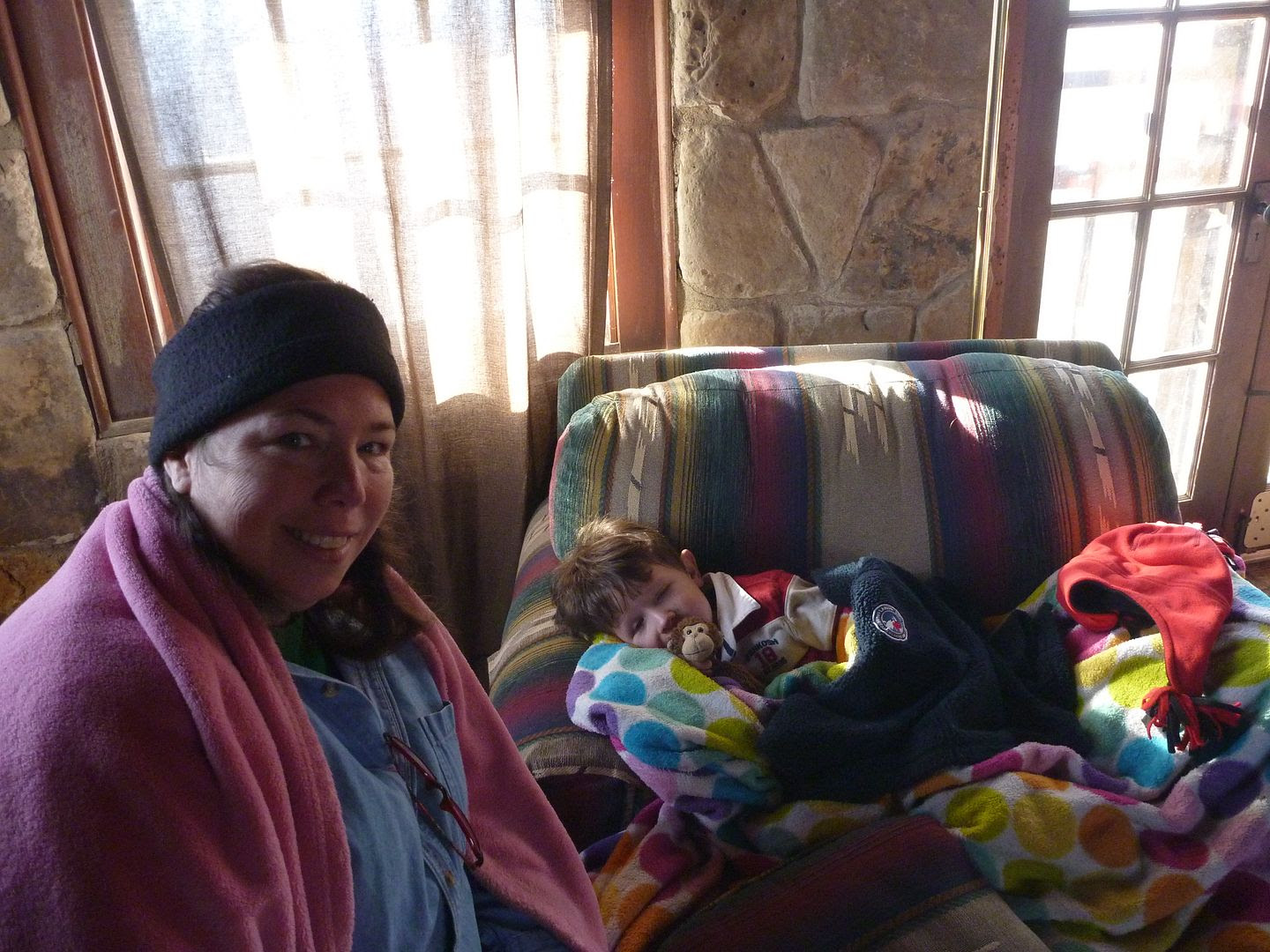 Of course, when we drove back home (after a 12 hour drive and crawled into bed,) we were awakened by my older daughter when she called after her water had broken. And, we were blessed with our first granddaughter, Olivia, who is just over 2 weeks now. They went to an appt with the geneticist yesterday (a couple hours away) and will go back there tomorrow to see the opthamologist and neurologist (MRI.) So many appointments, so much to do... They spent the night away to be able to get to the early 8am appointment so here is Olivia taking a nap during her first night away from home in a hotel with her mom and dad (and aunt, my younger daughter.) It's interesting to see how different people cope in stressful situations. It seems like we inadvertedly take turns being strong, then subside a little under all the pressure while allowing someone else to take the reins for a while...yet all of us try to be positive, loving and courageous. We've found some incredibly supportive online friends from FB groups, blogs and networking who also have someone they love in their lives who have Apert Syndrome. My daughter doesn't feel as alone as she initially did. However, she did say last night that she feels like she's sinking. She is stronger than she thinks she is. She just hasn't found her inner strength and purpose yet. It'll come...it may take some time though. I'm there to support her though. I gave her a book, Uncommon Beauty ,for her to read as well. 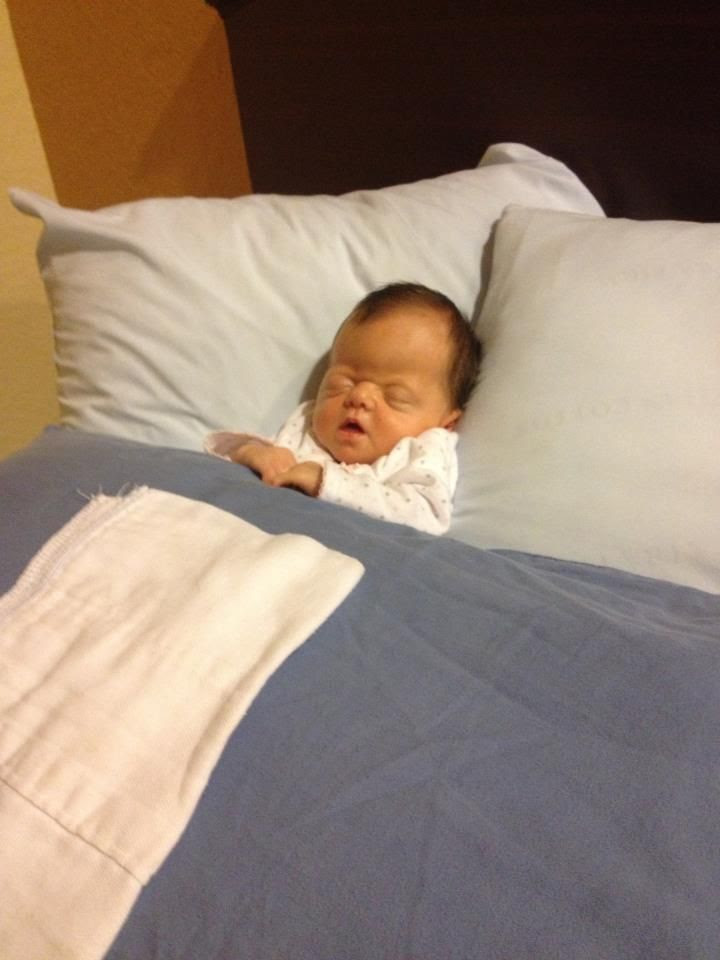 In between those events, I took my older son on a cub scout camping trip. It was a nice break and he enjoyed playing with his friends. Of course, it would have been SO much more fun had the weather cooperated. It rained.....all.day.long! Brrrr! That didn't stop the kiddos who found fun stuff to do. The parents seemed to be the ones who whined the most. We had taken our bikes to ride along some of the 37 miles of hiking trails in that state park but we were limited to the road in front of our campsites instead. But all in all, we had a great time! 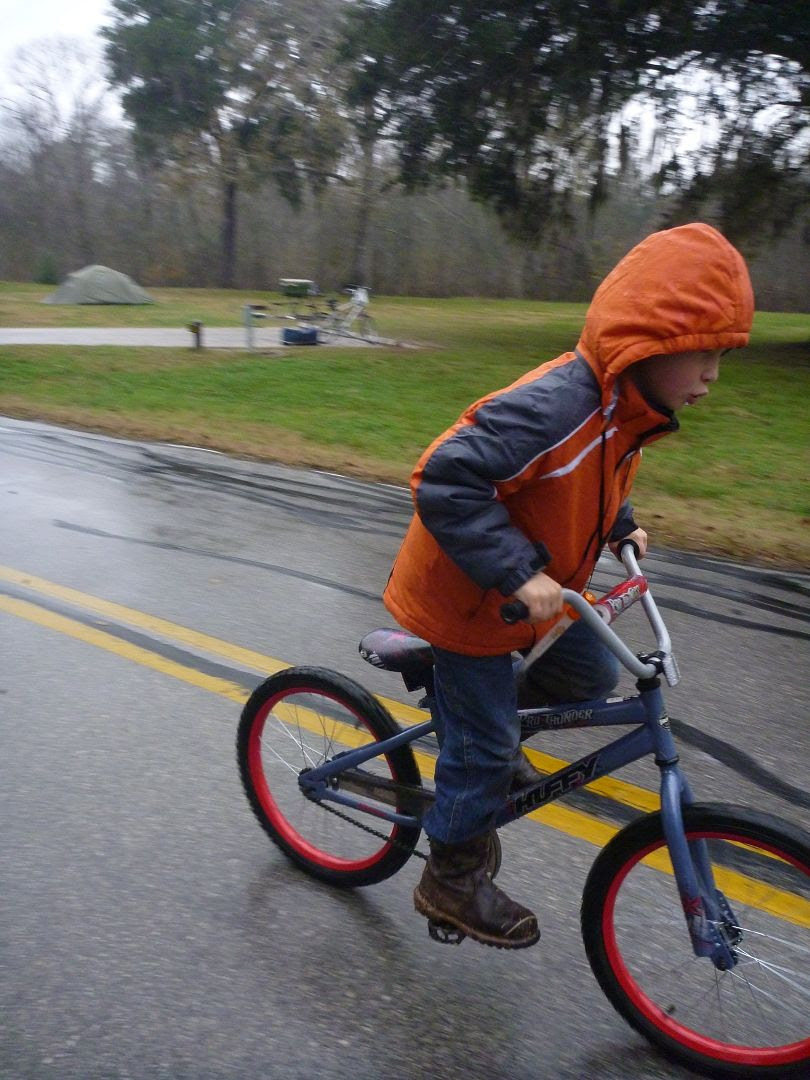