My kiddos started school last week. I was excited to know that I had a whole week (five days from 8-1) without kids! I pick up the little one at 1 and then his older brother a couple hours later.

What did I do? Way too much to list! I was a chauffeur between taking my oldest daughter back and forth to work (she has no car and lives close by) and taking my nephew back and forth to the local university where he'll be starting next week. Just when you think you're finished, something else pops up! I have yet to finish one particular thing! I get started on something and never seem to find the time to complete a task! Busy, busy, busy! Little things, big things, tasks and people that seem to need something right NOW! I know that everything will slow down and in a week or two, I'll be wishing I were busy again....well, maybe not.

As with new schedules, there are adjustments. On one particular day this week, I needed to attend a meeting at the kid's school where you hear about what's happening and then talk to your kid's teacher. By the time I picked the kids from the babysitter afterwards and got home, they wanted something to eat before going to bed. Not knowning whether they had eaten or not, cereal sounded like a good option, lol! I let my kiddo eat while he watched his dvd. I walked away a few minutes as I was getting his brother to bed and when I returned, this is what I found: 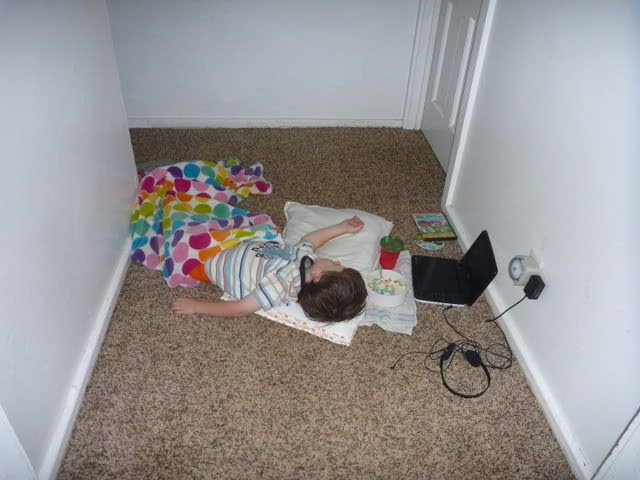 We didn't take a vacation this summer. We wanted to, of course, I always want to go somewhere with the kids...but we needed to do something more. My almost second-grader (who will start school this week) has had some speech issues and after many months of 'communicating' with our insurance (and those involved,) we realized that speech therapy wasn't covered. So we decided to invest in two or three days a week for speech therapy during the entire summer.

It was well worth it.Initially, I couldn't figure out exactly what he was doing incorrectly, especially with his 'r' and 'l' sounds, therefore I couldn't help correct him. I just knew it didn't sound right and he sounded like a little kid. My friends just think he has an accent from somewhere else (Boston? another country?) and thought it sounded cute. Perhaps. But as he is getting older, he needed to understand what he was doing differently and correct it. Once he realized he needed to keep that tongue "Tight, Up and Back," it got easier.

While he enjoyed the many games designed to teach him as well as have fun, he really loved the eating part! During one visit, the therapist and he made pizza (bagel, pizza sauce, mozarella cheese and pepperoni) in a toaster oven and he was hooked! He loved being able to make it and we had to do it at home as well. Of course, the reason she did that was to make a 'recipe' and have him repeat some phrases while doing it. I had him to that at home as well as she also sent home a 'recipe card.'

This is a picture I took on the last day of therapy. They are playing Angry Birds and she had already cleared out the therapy room of all the games and took down the projects they had made from the walls. He loves long sleeved shirts (even though it's VERY hot outside) and had just recently aquired a bright orange vest (like those who go deer hunting.) He likes to look like a 'hunter.' 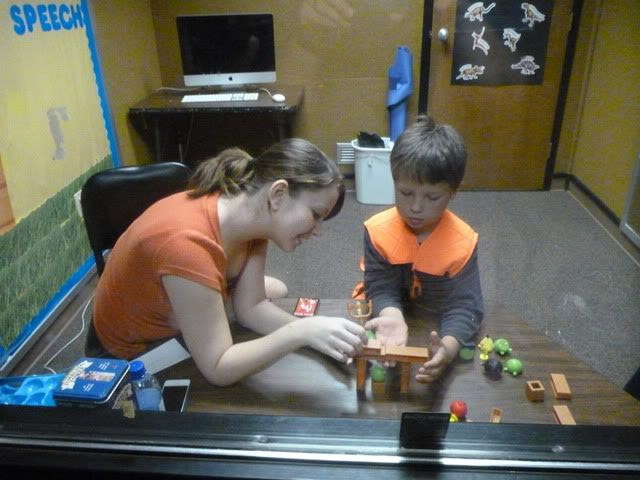 I have always been a 'correcter' and find myself even correcting my grown children if they make a grammatical error so I know I'll continue to assist my kiddo as he learns to say these sounds correctly. It'll take some time but it was a fun summer nonetheless! It's amazing how FAST it flew by!!