My kiddos and I went to the mall yesterday. I hadn't been to the local mall in a long time, especially for the purpose of shopping/searching for something, rather than to run in and buy something from a specific store. We were looking for a newsboy cap for my youngest son who was a character in a play (and needed it to complete his look as a street boy in Charles Dickens time.)

While there, my older son bought a toy helicopter from a kiosk in the middle of the mall (from money he's been keeping/saving for over a year.) He spent $43 on it. Amazingly, Santa was already there too (and there was no line.) As I started to walk by, my younger son walked up and got in the line to see him. I smiled and just followed him...why not? So they talked and took a picture with Santa too. We searched in six stores and were headed for the last place (a major department store at the opposite end of the mall.) Just before we got to it, we stopped at a cookie store and bought some cookies to munch on (a tradition...my kiddos love the sprinkled sugar cookies there and since we don't go to the mall much, it's something special we love to do while there.) We sat down to eat them at a nearby circle of chairs. Afterwards, we went into that large store and went upstairs first to the bathroom and then to the children's department where I found an associate to show me where the hats were (I would have never found them.) We went up to the cash register to buy the hat when I realized that I didn't have my purse!

I immediately ran back to the bathroom and was sickened to see that it was already gone! I asked the service desk associate if anyone had turned in a purse and nobody had. I went back to the hat section and checked again (it wasn't there.) I returned to the service desk where tears started running down my cheeks. They were writing down my name/phone number when a stranger suggested they check the security camera. I hadn't even thought of that. They looked at it and said that there were two people who came out of the bathroom after I had and they didn't have the purse (though it could have been hidden in a bag.) The lady said that they were checking to see if they were still in the store. Meanwhile, I just kinda slumped down on the floor and began to list the contents in my purse...in my head...while still crying a little...

...all my gift cards I'd been saving to use for Christmas gifts
three books of stamps
$49 and several credit cards
checkbook
drivers license, health cards, frequent shopper cards
papers with addresses and phone numbers I hadn't written in my address book
phone charger cords
my medication and inhaler
extra glasses and calendar
my wallet which was a gift from my late SIL and memorial from her funeral
my son's cub scout patches that he earned this year
peppermints, chapstick...

My older kiddo went back one more time to look at the hat section, just in case. I must have sat there for 15 minutes, trying not to break down crying, but feeling lost and angry. At some point, the associate asked the security people to double check to make sure that I entered the bathroom with my purse. Of course, now I'm picturing what I looked like going into the bathroom (with my kiddo,) how long we were in there, hoping we weren't doing something stupid, that my kiddo wasn't picking his nose, etc.

And then, much to my surprise, after 30 or 35 minutes, a security person came out just as the associate said that they didn't see me go in with my purse. I thought I definitely had it with me and even pictured it on the hook in the bathroom stall, yet clearly I was wrong. I felt stunned and couldn't even think clearly. My older son started telling me that it might be at the chairs. Chairs? What chairs? I couldn't think fast enough to catch up with what he was telling me. I finally caught on what he was saying and couldn't contain him. He asked if he could go check and I just said, go! He took off running and my younger son followed him. The security guard and I followed them. We went down the escalator, turned the correct way and went out the entrance to the chairs (where there was no purse.) I then asked the guy what we needed to do now. We walked back into the store to use the phone at a cosmetic counter to call the mall security and it was then I saw my wallet (that had been inside my purse.) I could see the lady talking to me and couldn't understand what she was saying. Then it clicked, they had found my purse. She was telling me that someone had turned it in to them and that she had just left a message on my phone at my house. All I could do was start crying (again) and start hugging her (and the other two cashiers.)

And then, I told my kiddos that we needed to get through the mall quickly as I looked horrible (red faced, swollen eyes.) We quickly walked through the mall and got to our car! I had gone from being so sad and angry earlier to being grateful and blessed. Needless to say, I was emotionally tired.

As we were driving away, I thanked my older son and told him that I was very proud of his courage to run to find my purse and that I was incredibly happy that he stayed calm with me. Inside, I was thinking about his awesome protective instinct and how amazing that he (and my younger son) knew that while their mom was having a weaker moment in the wake of her misplaced purse, they didn't act up and just waited patiently. He said that he wished he could do something for me too and his dad. He mentioned that we buy birthday presents for him and Christmas presents (his birthday is today and we celebrated it last week) and he wished to go with his dad to buy one for me and with me to buy one for his dad. I had forgotten that important part of childhood. I remember doing that for my parents and had not actually taken the time to have them do that for us in the last several years. Such an important reminder. I'll make sure that's on our list of priorities this year.

After I got home, I saw that there were three calls, two from the lady who found my purse and one from the associate from the store. I immediately called back the lady who turned my purse in and thanked her immensely.

And the picture to remember the day.. 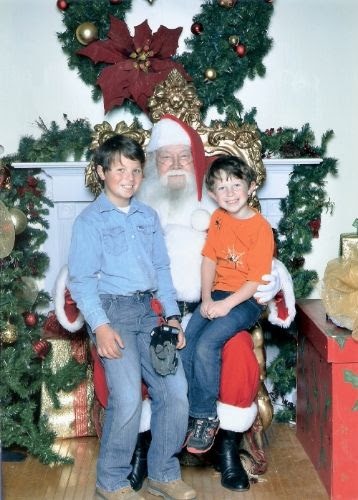