There have been many examples of kindness in my life lately. Just in the last week, there are several that meant a lot to me!

Earlier last week, I was at the hospital with my adult daughter, granddaughter, and by two boys. We were waiting to be called for my granddaughter to have an ultrasound on her head (possible hydrocephalus among other issues.) We were sitting around talking and coo'ing with the baby trying to be quiet (my boys are still working on their 'indoor' voices.) A man whom we didn't know was sitting near us started talking to my daughter about her daughter and they had a conversation. At some point, my daughter went to give her insurance information to the staff and the man started talking to my boys. I don't remember when he left but he returned with four little popcorn bags that were being sold near the entrance. We had been smelling that great popcorn aroma for a while too! It was a very kind gesture by him and we all enjoyed popcorn while waiting! Thank you Mr. Brown for your generosity!

On Friday, my daughter needed help to get huge couches moved from her two story apartment. They were heavy, it was really hot...Luckily, my brother and nephew were there to help. We had to make two trips with the trailer as there were some other (heavy) things too. It was so hot that as we were moving the furniture, the sweat went into my eyes and they stung so much that I couldn't even see. It was awesome that they were there to help because there was no way the two of us could have done it alone. Thank you Mike and Cody.

My friend Tina invited me to go to lunch with her on Saturday and go to the casino in the neighboring state. I can count on my fingers the number of times I've been to one and don't usually go. I've never been with a friend before either. It was a spontaneous offer and I checked with my nephew about babysitting and I texted her back that I'd love to go. Within a half hour, we were on our way. What I didn't know was that she gave me some money to use while playing. I used that money for the whole afternoon and came home with a little extra. We played Amazon Fishing or something like that where about five players play individually but then at random times, they all play together as fish swim by on huge screens on the wall in front of us. Just the comradery of being with a friend and the great conversation we had made it an awesome day!!! She was very thoughtful and I enjoyed the day so much! Thank you Tina.

While running errands a couple days later, I had about 45 minutes to spare so I stopped by my mother-in-law's place. They were just having lunch in the dining area and I went to her table that she shared with another elder gentleman. I walked up to her and started talking to her. She didn't acknowledge that I was there because she was concentrating with using her spoon to try to get her (mushy) food onto her spoon. It was so slow and meticulous as she has always been careful eating and with the progression of her Alzheimer's, it's getting more difficult. In the mornings, the hospice caregiver helps her with her meal. I pulled up a chair and started feeding her. She never looked my way and continued to eat. Later, the staff offered a dessert and as soon as it was put in front of her (beside her plate,) she started to try to pick it up to put it on her plate. She has always enjoyed her desserts! We have always had that in common. I then fed her the pumpkin pie and then the rest of her food. It was a quiet enjoyable experience for the both of us. She never did notice the person (me) feeding her and I didn't want to interrupt her concentration and deliberation in eating. I often thought about the times throughout the years in which we enjoyed each other's company...how much I miss her...and how her example of kindness throughout all the years of being married to her son is now being reciprocated back to her in ways she now needs. Thank you Mom.

The day before yesterday, I laid around all day and ignored my dishes (enough for two days) and housecleaning. At one point, I walked in the kitchen and my younger daughter (who is staying with me this week as she's finishing up cleaning her apartment because she is moving to another city four hours away,) was cooking dinner for us. It was awesome to walk into the kitchen a little later and see that she had also done the dishes and cleaned the kitchen as well. I'm not sure whether it was because yesterday was my birthday or because she was just being nice but I loved that awesome kind gesture. Thank you S.

It's been a really nice week.

We generally celebrate July 4th at my hubby's sister's house. It has become one of our favorite family traditions. This year, she had many family members and friends there to hang out, eat, visit and celebrate the Fourth together. We had an awesome time and the weather cooperated beautifully!

The previous week, my soon to be third grader broke his arm while playing with a neighbor on their trampoline. So he wasn't able to swim in the bay or do what he usually does but he had a great time nevertheless. He wanted a camouflage colored cast but settled for green instead. 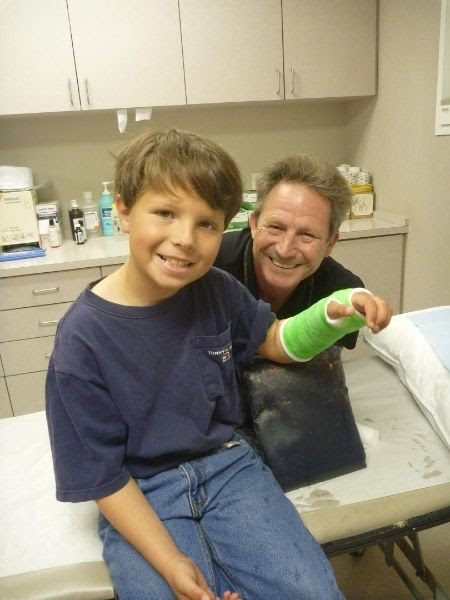 Of course, my boys had to wear their patriotic shirts and loved them. In fact, my youngest 'had' to wear his shirt the following day too (it wasn't very dirty, lol!) 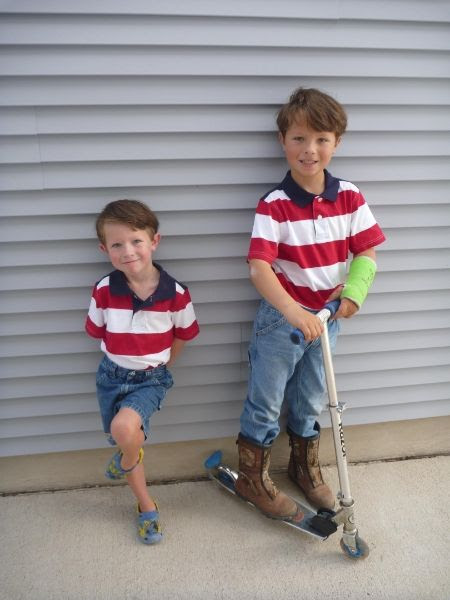 I loved all the decorations at SILs place! The kids helped place them on the bulkhead! 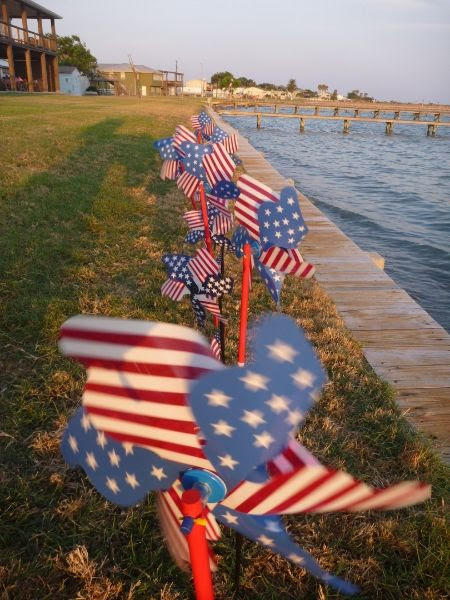 At one point, my hubby came in and got my camera to take this picture. I agreed after I saw it...it was a Kodak moment. 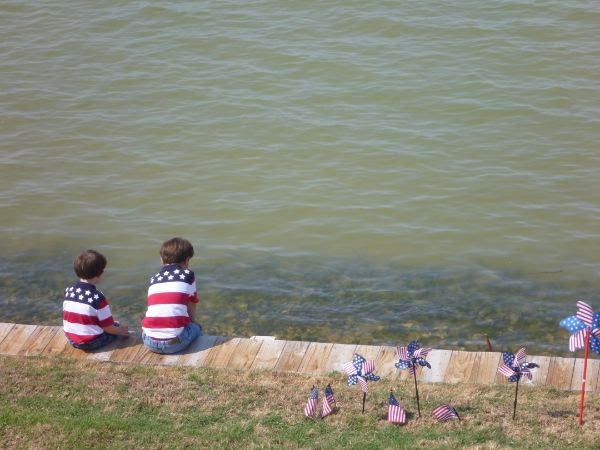 We had LOTS of food including hot dogs, brisket and all the extras! There was so much great food that I didn't get to try a lot of it! My SIL is an awesome cook! 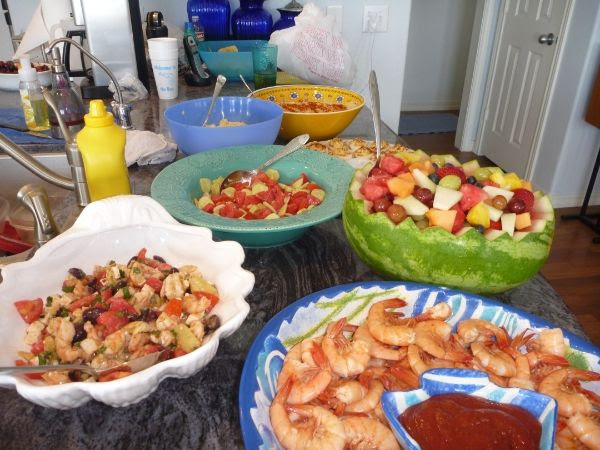 My SILs house is the blue one with white windows! That house and their neighbor share the pier. 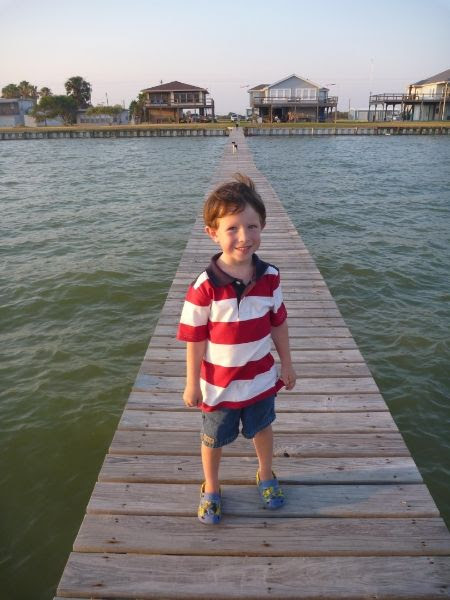 Sunset. One of the neighbors had HUGE kites that they flew during the day. Watching them in the wind seemed so calming. 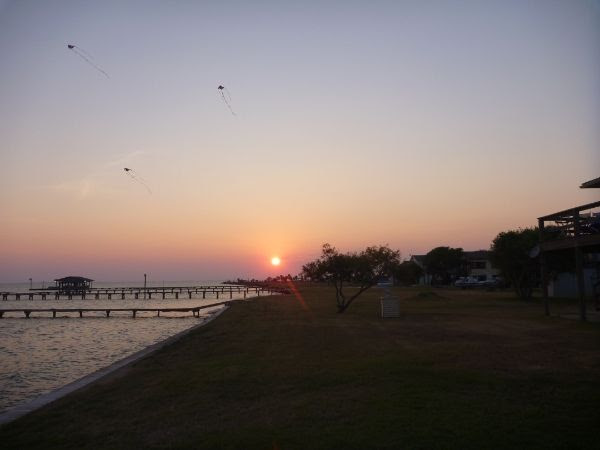 One cool thing that occurred that weekend...my husband's nephew's son (who has autism) held onto and enjoyed a sparkler. He stayed inside during the fireworks but watched them through the window. He is one week younger than my almost third grader. 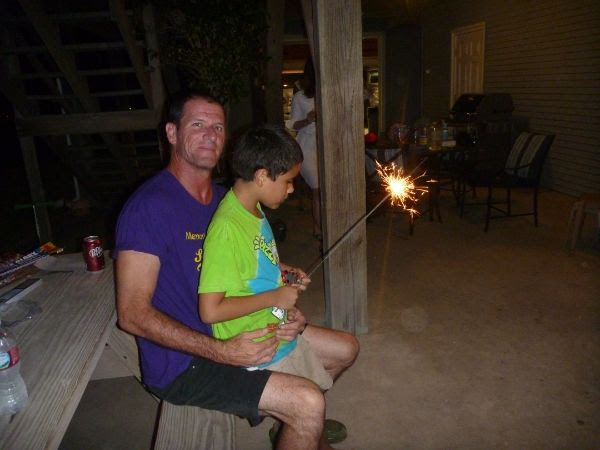 Such a great weekend...there were 14 dogs there and they all got along. More people than I could count. I loved helping out in the kitchen (aka hiding there away from lots of people) and it was just another great holiday to remember with my SIL and hubby's family.
Posted by robin at 7/10/2013 04:02:00 PM 1 comment: