Riding the subway in NYC

Last weekend's trip was a nice change. While sightseeing in the big city, we rode the subway a lot. Normally, I follow my bff who lives nearby but she wasn't able to meet us so we tried it alone. It was at first a little overwhelming (especially since I couldn't see the little maps to follow those colored lines) but got the hang of it (and learned to just get off and look at the bigger maps to double-check the routes.)

It was so interesting to people-watch and see all the different people who ride the subway. On one ride, a man who was the building maintenance supervisor from the Metropolitan Opera sat across from me (he still had his nametag on.) He was sketching on a pad. I was thinking of how many concerts he had attended via work or the people he's met through his job. How cool that would be!! I was wanting to get up and see what he was drawing too because he looked like he was being very detailed in his drawing, but I didn't.

On some trains, there were quotes on the wall. I thought a lot about this one. 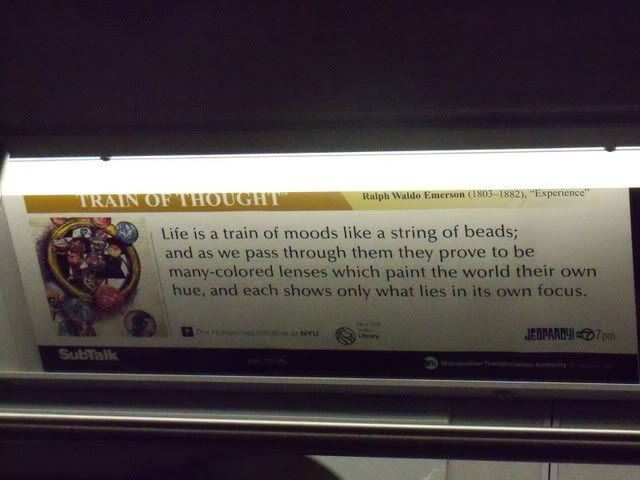 ...my mother-in-law left her home and has never returned. She was transported via ambulance to the hospital due to the paramedics thinking she were mentally incompetent. Interestingly enough, I saw her every week for years before then and, even though she seemed forgetful, I thought those instances were due to her age. She was 86. Her other signs of Alzheimer's were so similar to her personality (negativity, calling several times about something, becoming aggravated over something small) that even I, the person closest to her, didn't see them.

Since that time, she has continued to deteriorate mentally to the point where she doesn't know her family. She has no friends (they're all deceased) and the closest relatives (us) are very familiar to her but she doesn't realize we are related. She just knows she has a positive, comfortable feeling about us. I don't think she remembers my big girls but she loves playing with my little boys. If it weren't for the boys going over and playing with her, I wouldn't know what kind of conversations to have with her.

I took her some new glasses today. Her last eye test was about five years ago. She broke her glasses a few weeks ago so I had to take her to get another eye exam and then order some new glasses (two pair, just in case.) The lens of the broken glasses have still not been found. She just wore her broken ones until I brought these new ones to her today. They were a little different, but she didn't even notice. In fact, within a minute of having them on, and the broken ones out of sight, she had no memory of anything related to them.

We've requested assistance from the VA (my FIL was in the Navy during WWII.) It took eleven months to process her claim for aid and assistance (which could provide up to $1056. a month.) We have just received one check finally for that amount. However, they propose to declare her mentally incompetent and want to appoint a fiduciary (someone to take care of that money they'll be sending her.) Well, of course, she can't take care of her money, that's a given. But the process in which this is done with them takes an average of 12-18 months. When they actually start that process, the monthly funds will stop until the claim has completely been processed, and then when it is finished, they'd then send the accrued amount during the processing time. Is that not crazy? Meanwhile, she will be in a deficit of $1700 a month.

Her money runs out in a month, maybe two...I'm in the middle of writing one of those letters to send to the remaining children of hers (my husband's siblings.) I am carefully choosing each word on paper before I email them to beg for monetary assistance to keep her in her expensive assisted-living facility where she is most happy. If she is in a nursing home, with her unique personality, she'd become abused or neglected by the personnel. She has a certain way about herself....luckily, the staff where she is now have learned how to handle her and what to expect from her. I want to keep her there and am crossing my fingers that whenever I send this request out, that one of them will find some nest-egg to keep her safe in her little tiny room until that day in which she moves on......
Posted by robin at 4/19/2010 05:07:00 PM 5 comments:

Close to the ground.

This week, I found cute little magnifying glasses at Target (I just love the front dollar section.) I bought one for each of my kiddos and they've been exploring outside ever since. The toddler seems even more interested than my preschooler in discovering little bugs and treasures in the yard. I even went back to the store and bought about twenty for my preschooler's teacher so she can have them in her repertoire of cool stuff. Luckily that was a good idea since she normally borrows some from another teacher...now, she doesn't have to.

I tried to help my toddler find little things to look at but never found any. I did notice that he found these bugs. I guess it's because he's so close to the ground. 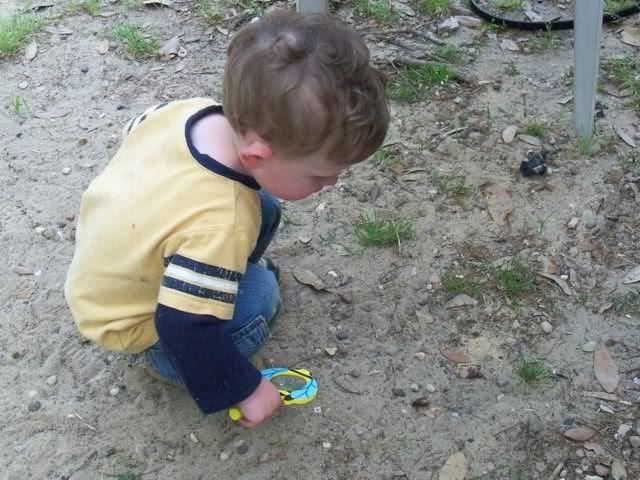 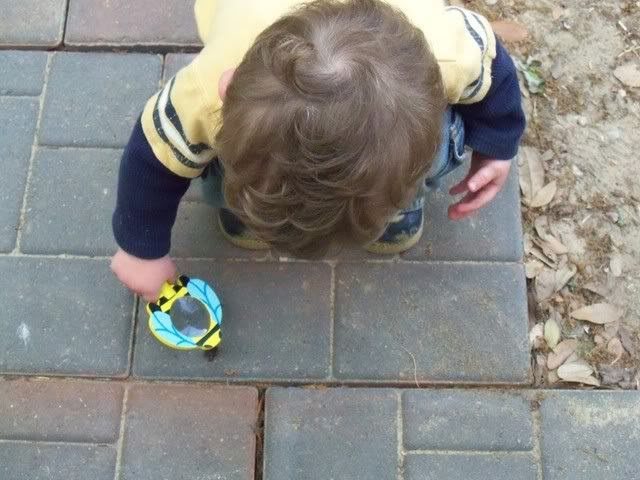 Follow along each Saturday with Straight Out Of Camera started by Slurping Life.
What it is you take a photo straight out of the camera No Editing allowed.
Then head over to Slurping Life & link up.
Posted by robin at 4/17/2010 08:29:00 AM 12 comments:

An afternoon in Houston

This past week, the boys and I traveled to Houston to visit a friend whose daughter was in the hospital. We were going to also visit another friend but they became ill so we had extra time. Beforehand, I packed a lunch because I knew we'd be hungry at some time. After my preschooler got out of school at 1pm, we headed out.

It was a couple hours away so the kiddos had a nap along the way. I just pointed the camera behind me while driving while watching the road (that's why it's off-center.) 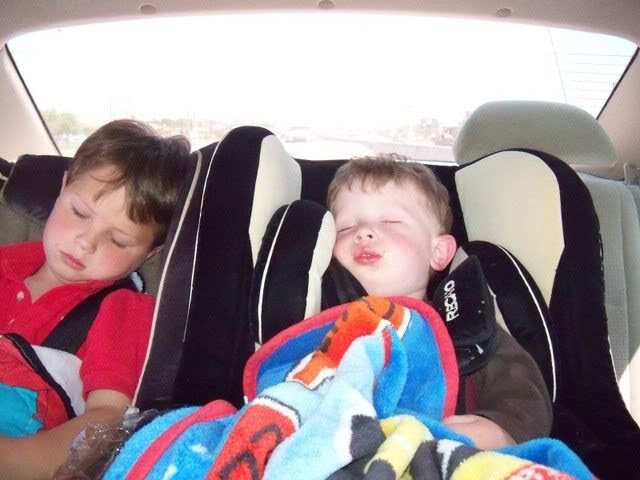 The medical center is full of many hospitals that line this really long street. It was a little scary to drive in the traffic because it was unfamiliar territory and because there were so many things to see while trying to find the correct hospital (I had never been there before.) I finally found the hospital and then I had to drive around again to get to the correct parking lot. After visiting our friend (where I forgot the camera in the car), we had a picnic in a grassy area of a park. It is a huge park next to the zoo and museum district. 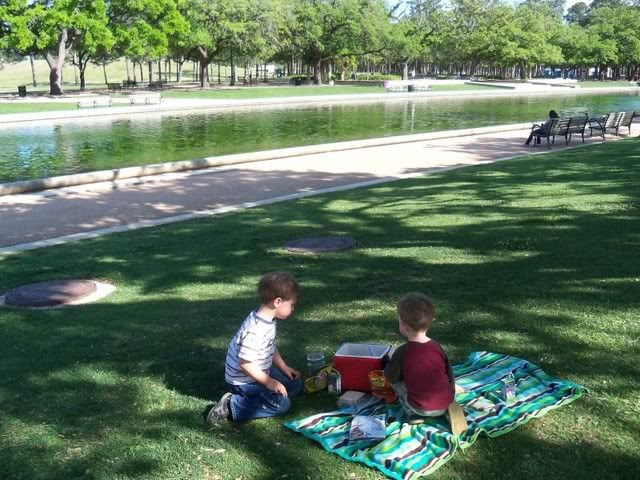 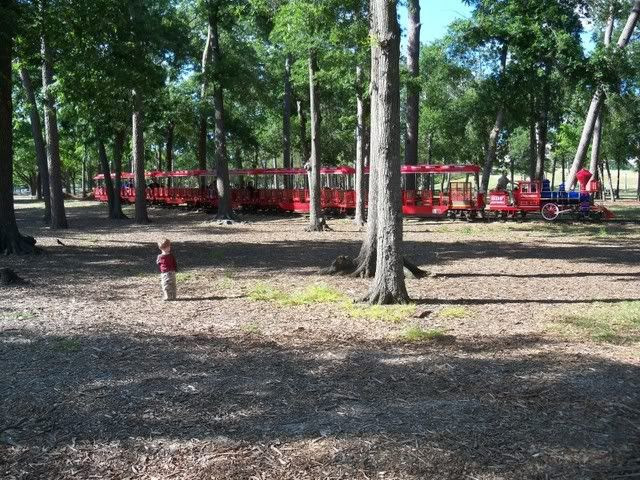 It was later and we barely made it there and got to ride it before it closed. The zoo was still open though (for another hour) so we went on in. It was the perfect time to be there...on an afternoon on a school day near closing...no crowds. 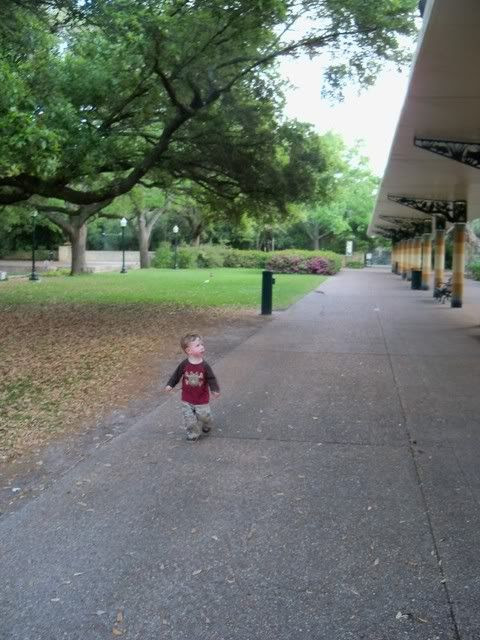 And we rode the carousel twice (we were the only ones on it!) My preschooler was incredibly happy to find this particular animal to ride on...the raccoon...because his 'lovey' is a small raccoon named Ricky and he knew by riding it, it'd make Ricky happy! 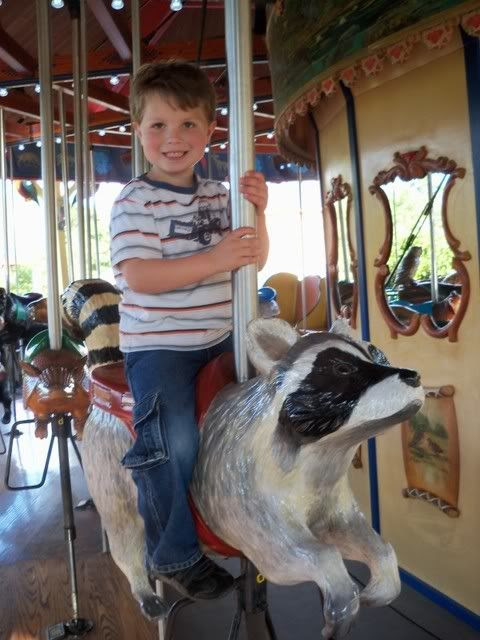 After the zoo closed, we played on a huge hill near an amphitheater. The boys ran up and down it for about thirty minutes. 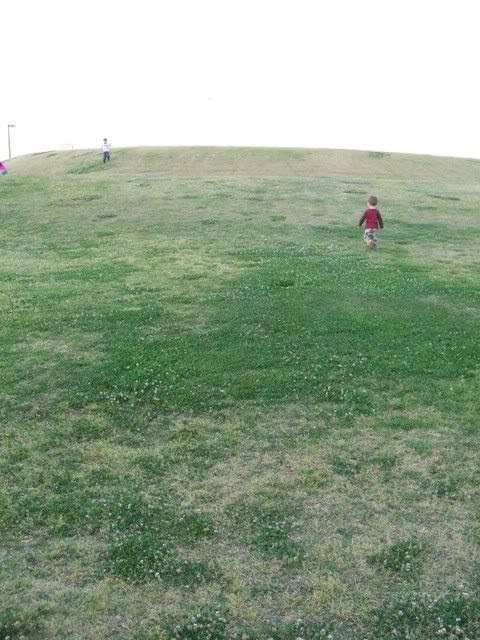 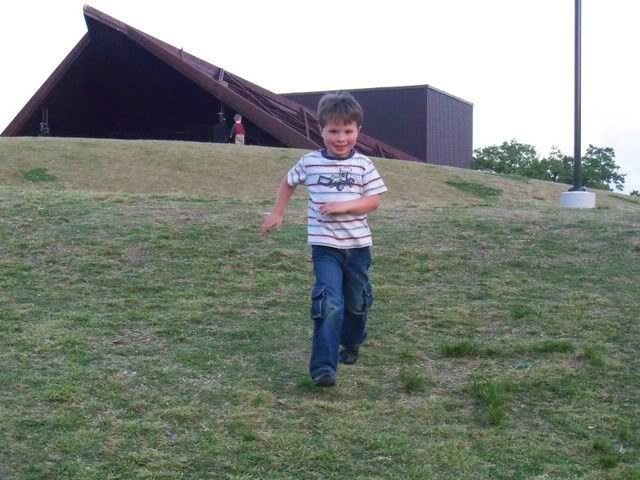 And finally, as it was nearing dusk, we played near the long pool thing watching ducks. Of course, the kids wanted to get as close to the edge as possible and put their hands in the water. Next time, we'll bring bread for the ducks. 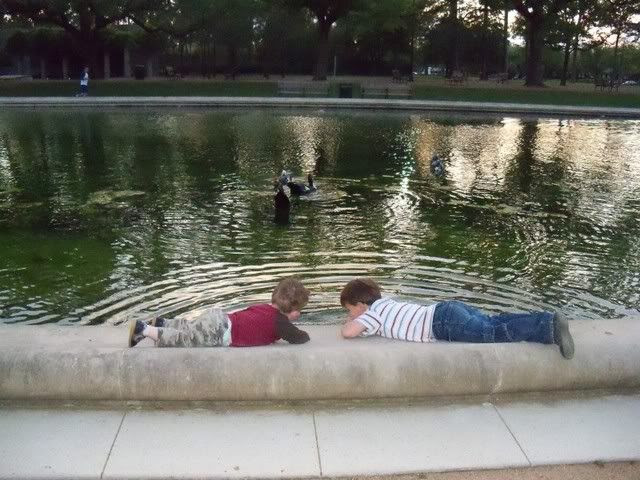 For an unplanned event, we had a great afternoon. We spent just enough time playing around and visiting the zoo and park that we missed all the traffic and were able to easily make it home without any delays. 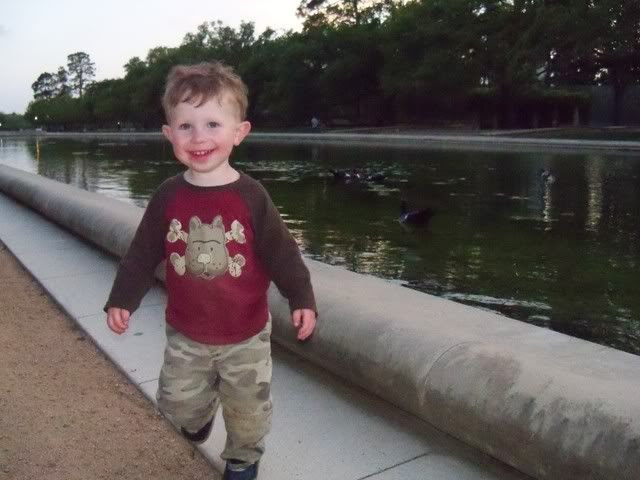 I got a call from a friend whose workout partner couldn't go walking with her and she wanted to know if I were interested in going walking with her. I said sure. It was at a place I hadn't been before but was curious as to what kind of path it was (and walking with someone always makes the time go faster!) She picked me up and we went to the place. Interestingly enough, she carried a little pouch which contained her necessities including her handgun (she has a permit) just in case. Um....ok. There were lots of other people walking, jogging or biking there as the route was 2 miles long. We walked it three times in an hour and forty-five minutes. I'd never done that before and was apprehensive about how I'd feel later on in the day. But....it wasn't too bad. It was definitely not something I could do daily but it's a good challenge once in a while. She called the next day and we'll go again on Sunday (her other partner doesn't want to do the whole six miles) so I'm looking forward to it. Now, if I can just stay away from the chocolate, I might actually lose a little weight, lol!
Posted by robin at 4/13/2010 09:56:00 AM 3 comments:

Yesterday, we worked outside a lot. Well, the truth is more like, everyone but me worked outside most of the day. I'd come out, check out the progress, take a few pics and then return to my own projects inside (loads of laundry, cleaning the kitchen etc.) Here is a sample of bringing stuff to the road (cleaning up around the shed in preparation to rebuilding part of it.)

This pic is of my kiddo, who is an expert xtr (zero turn radius lawnmower) driver pulling the trailer followed by my hubby with another load. The blades are not on, btw, and they did this all afternoon. When I first tried to drive this thing, it took me a LONG time to get it right. He's a natural with driving stuff like that. 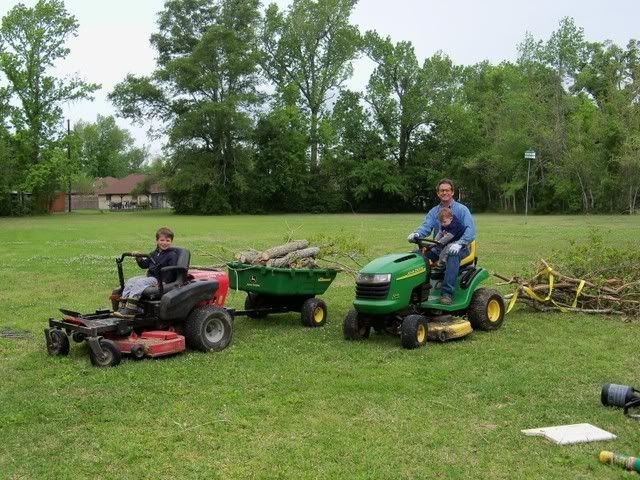 I've been walking again this week in my neighborhood. The weather has just been beautiful and the air has the sweet scent of wisteria. Across from my house are huge vines and I love to look out and see them. I love the gorgeous purple colors as well as the white and yellow colors that hide inside the flowers. This is the perfect time of year here as it will be too hot in just a few weeks. But for now, spring has definitely sprung. 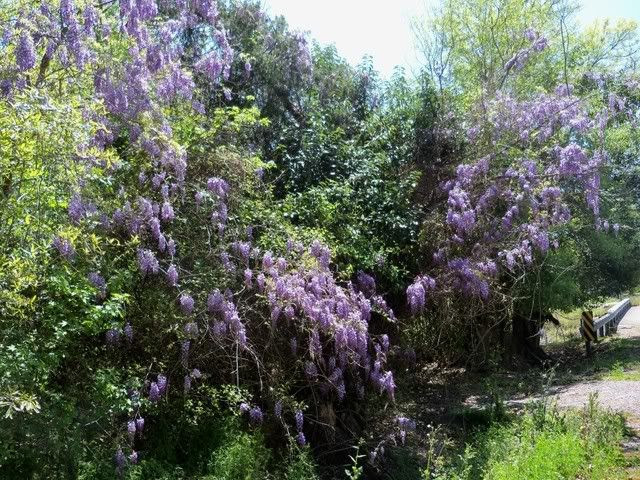 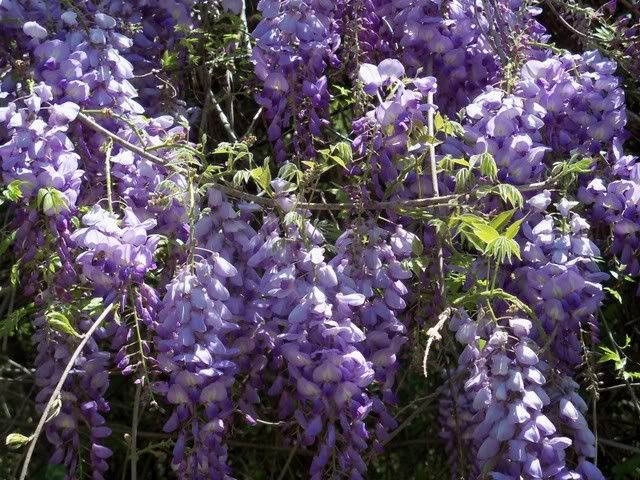 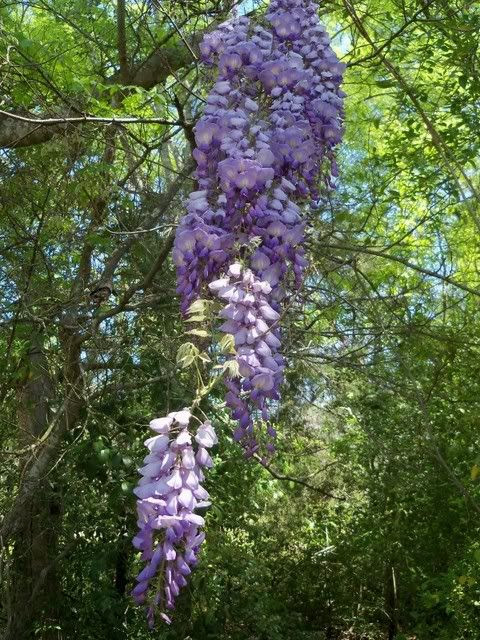 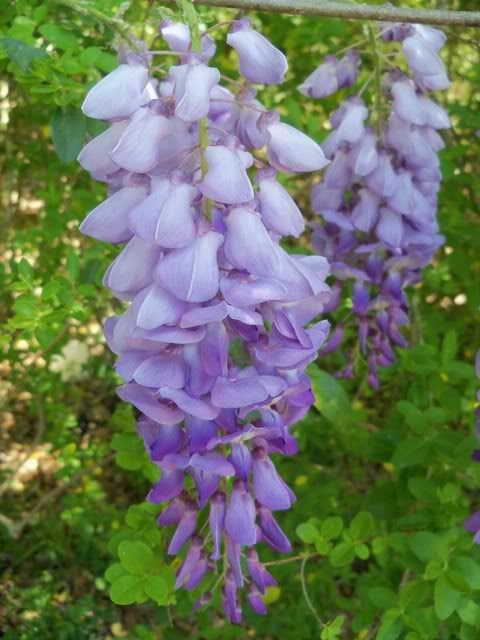 The honey and bumble bees also loved them! It sounded like they were swarming everywhere and it was cool watching them fly all around me as they searched for the perfect place to land. 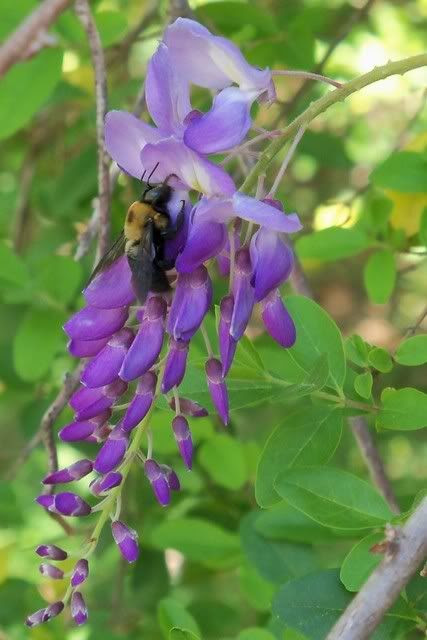 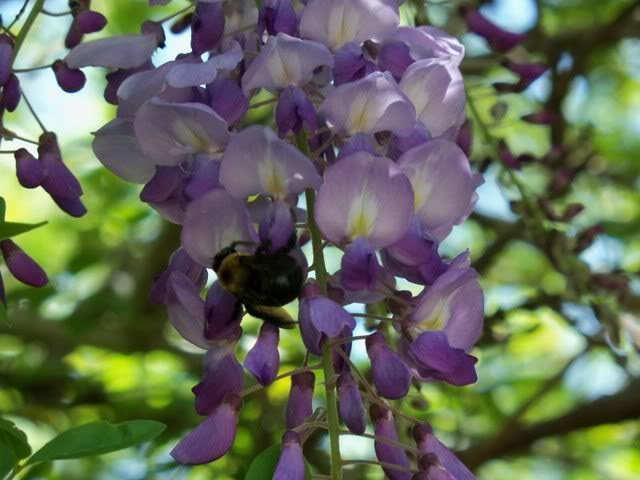