Decisionmaking is so difficult when you have such big decisions to make. I have to decide what to do about caring for my elderly mother-in-law now. She isn't able to care for herself. She doesn't have enough income to afford an assisted living facility. She has been in the hospital several days and they've determined she can't live on her own and probably has early Alzheimer's. So, what to do.... I'm debating on the outcome...find someone to live with her at home, move in with her, have her move in with us (no, scratch that idea), rent her home out to have enough income to afford an assisted living facility (we'd still need to pay for some of it.) I have such big pits in my stomach with the thought of someone not being patient or mean to her (because, really, she's a pain...she can be a really mean person and is so set in her ways and grumpy.) I want to do the best for her and am spending a lot of time getting all my information in order to make the best one. For now, they're trying to find a nursing home for her (for low level physical therapy) so that we have time to make that final decision. Sigh....actually, it's almost a panic attack I feel at times because I'm so torn up on all of this. I've tried cleaning her home up a bit and have someone doing intensive cleaning tomorrow. I want her to be comfortable, but safe and when she's not taking her medication properly, losing her mail, forgetting important people and relationships from time to time, there's a problem. That I know...and I have to continue thinking that I'm doing the best for her.
Posted by robin at 4/23/2009 03:57:00 PM 2 comments:

The climbing stage...I had forgotten about it. It seems that it's all my baby does. He has recently climbed onto and into everything! I found him earlier climbing from the little wooden rocking chair onto the living room table (a good two feet off the floor) earlier. He keeps crawling onto the couch (after his big brother takes the cushions off.) Unfortunately, his balance skills aren't perfected so he's a bit wobbly and I need to stay close, just in case. He loves stairs too. He crawled onto his walker (it wasn't made to climb on) and when his little feet got all crooked inside, he put out the loudest shrill distinctly making sure he was heard and needed help, fast! All these new climbing skills have happened in just a few short days...I love watching him learn new fun stuff and enjoy watching his excitement afterwards.

This is where I found him this afternoon. 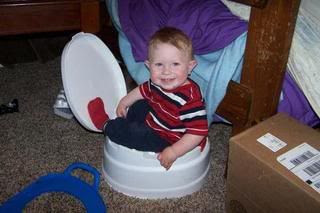 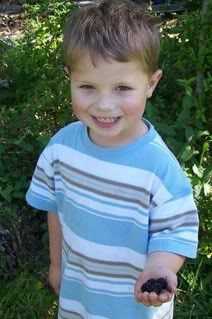 He picked a handful of dewberries (similar to blackberries) outside on the fenceline and wanted to know how to make a blueberry pie! On the way back in the house, I was making conversation and I told him he needed berries, sugar, and a little flour. A little while later, I noticed him crawling up on the counter and a few minutes later realized he had the flour out. I told him he needed a WHOLE LOT more berries to make it.

And then, I went and put the baby down for a nap.

When I returned several minutes later, he told me that that he made blueberry pie (with a big proud smile) and then opened the oven to show me. Fortunately, he doesn't know how to turn it on and I don't plan on teaching him, lol! I noticed a pan in the sink he used to mix everything up in. I reached in the oven and took out this pan and...it's his pie...full of flour, bread and a few berries. 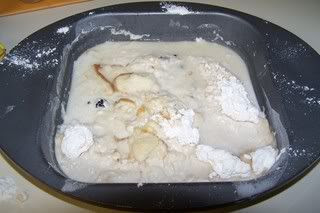 I loved making mud pies as a kid. I encouraged my daughters when they were young to be creative and they made 'potions' out of food and sauces. I guess this line of thinking has spilled over onto him as well. I hope so.
Posted by robin at 4/15/2009 08:12:00 PM 2 comments:

As each day progresses, there are times I think...oh, I can write about this later in my blog but later on...it doesn't seem that important or interesting. I decided today to write something whether I think it's interesting or not.

We can now allow the baby to crawl outside in the grass and not worry too much about him eating everything in sight. This afternoon, while we were out there sitting under the trees enjoying the cool shade, I watched the baby crawl far away. He just crawled a certain distance and then sat in a large patch of clover. He just sat there for quite a while, pulling out the clover, tasting a few, and testing his independence. It was nice watching him and savoring what life is about...the little moments.
Posted by robin at 4/14/2009 06:44:00 PM 2 comments: