I was attacked by killer bees!

Sounds like the name of a movie, huh? But seriously, we were at my SIL's this past weekend. She lives in South Texas. Every morning, we go for a walk with her (and BIL's) 5 dogs on the road next to their house. The dogs like to run around, chase bunnies (once in a while if they see them....they don't catch them) or check out stuff as we walk.

We noticed one dog having a bee or two flying around it stinging it. Then another. My kindergartener, (S), and I stopped and froze (what we usually do if bees start flying around us.) My hubby (DH) and my toddler, (C,) (who I put in his backpack carrier on DH's back just a couple minutes earlier...he had been walking next to me) were behind us a little bit. Fortunately, when he saw what was happening, he stopped and very slowly started backing up in a straight line without moving anything else. From a distance, DH said he saw a the swarm like a fog come up from the culvert and fly into us. I saw my BIL (who is 68) start waving his hat around his head. Then I noticed S right next to me and his neck and shoulders had at least 15 bees all over them. He started screaming. Then as SIL started swatting, I felt them all over me. It was surreal and it wasn't making sense, it took a second or two before we started to run. We all started running (as S is still screaming) toward the house which was about 400 or 500 feet away...they have a long driveway out in the middle of the country.)

At one point, I overextended myself as I was knocking the bees off of S's back (and fell cutting my knee, elbow and hand (tearing my capris,) which I didn't realize until much later.) I jumped back up and started running again. The bees continued to sting me...mostly my head. It seemed with all of us, that they stung the head area mostly (face, shoulders, neck and head.) I only had a few stings on my back and my entire head seemed like it was on fire. They were all in my hair and I couldn't get them out...I just kept hearing that awful buzzing sound. It was a traumatic experience and extremely scary for all of us. They were so aggressive and bit us the whole time they chased us!!

When we got to the house, we just went inside (the bees had chased us all the way there and were still stinging us.) Once inside, I think the communication was cut off between them and the rest of the swarm/queen and they stopped. Either that or they didn't like the air conditioning. They seemed to stop stinging and go to the window to try to get out. We killed about 50 - 100 bees that were attached to the dogs and us when we came inside. I think it could have been SO much worse if there were only one of us rather than 9 targets (dogs and people.) S continued to scream (which made it so stressful.) It took a while to get the last bee out of my hair! We took benedryl and advil immediately. SIL went in her vehicle right afterwards to go pick up DH and C. By that time, they had continued to back up backwards far away from the incident. When they got in the truck, there were still bees on her that she had missed that they killed. As they passed by the culvert area, my sunglasses were on the road (where I had falled) and DH said there were about 50 bees still swarming them. The bees followed their vehicle as well back to the house. They sat in the truck about 5 minutes before running into the house.

S had about 5-9 bites just on one ear and the bites were indistinguishable from each other (as were mine) since there were so many. My entire head under my hair felt like it were on fire! Later, I saw (from the mirror) some red bite areas where I was bitten on my neck and back) and didn't even feel them. I gave him a cold compress to put on S's ear (and put on Spongebob to try to distract him.) Even though I had kids benedryl and ibuprofen, I gave S an adult benedryl and one adult advil. We called the Sheriff's Dpt (who said they didn't really do 'bees' but offered to send out an ambulance.) We said we'd call back if we needed them. DH is a EMS and we watched S carefully. After about two hours, we were feeling better....didn't hurt as bad. That night, it hurt just to put my head on a pillow and took a long time to go to sleep. Now, a couple days later, SIL and I still have a few bites each that are still swollen and itchy. SIL will be calling around today to see if there is anybody we need to notify etc. She was thinking that kids who are stung multiple times can become more prone to allergic reactions later if stung again so I'll call his pediatrician later to explain/ask, just in case.

Here is a pic of one bee dying on the kitchen counter (BIL sprayed it with wasp spray.) They look just like honey bees, maybe a little smaller. 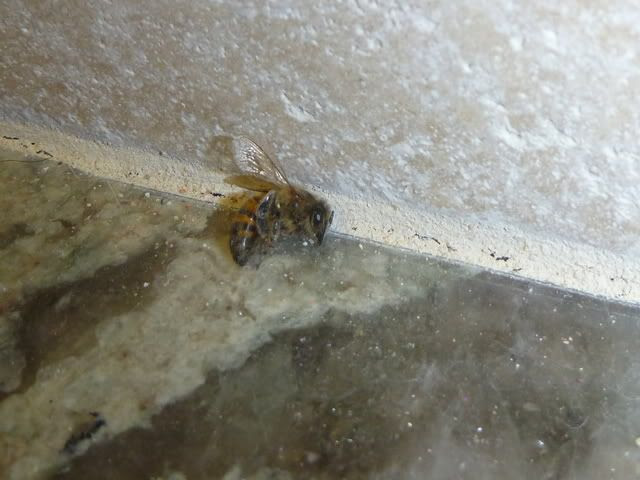 DH felt helpless as he saw us getting stung when there was nothing he could do. We still don't know why he was behind us when it all started (neither of us could remember anything in particular happening that would make he and C be so far behind us) but were SO thankful they were. I called my brother to have him surf for info (because their house is at the bottom of a hill and they can't get internet..our cellphones don't work there either but they do have a landline) and one website said apparently, they can continue to sting anything within 1/4 mile for up to 24 hours after agitated. We think one of the dogs agitated them (the dogs always check out that area....either they weren't there before on previous walks or were already agitated when we got there.) We were incredibly lucky it wasn't worse...definitely provides a good story.

It's been a week but we're finally on the upside of being sick. Never have we all been sick at once (the kiddos and I) but the good part of it was that none of us had an appetite so I didn't have to worry about food! The only sign of our sickness is my toddler's runny nose. And at the height of it all, I had strange hives/rashes all over. After considering all the possible allergens I could have gotten into (and the fact that benedryl wasn't working), I resorted to going to the doctor and getting a shot (to help it go away faster.) Luckily, today I haven't been itching as much (and it's almost completely gone.)

On one evening, the kids and I were all laying in bed feeling miserable. The boys fell asleep and looked precious so I snapped a shot. 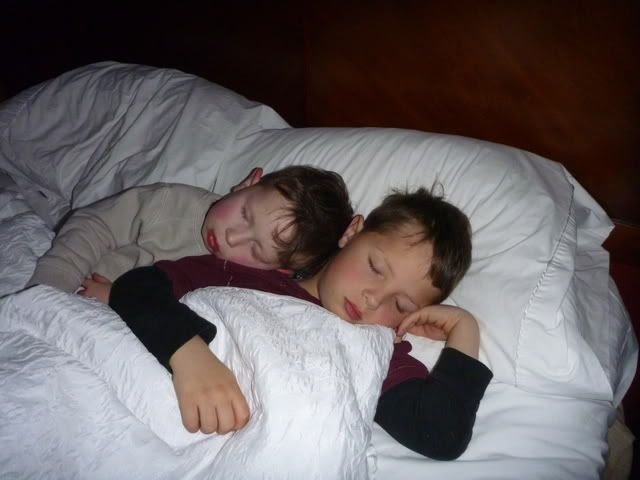 My friend needs a hug

I have been accumulating airline miles for a free roundtrip for months. I was hoping to go visit my brother (and his family) in the west but within months, he was transferred (he is in the Navy) to a state where my airline won't fly...Hawaii! Of course, now I have to start saving to visit him there!! But in the meantime, I had aquired two trips that I needed to use up before they expired.

Needless to say, last week, I was thinking of options when my husband suggested that I fly to see my friend (whose seven months old baby was in the hospital and had been in the NICU for a few months.) I had met my friend in person about four or five years ago at a gathering of friends. Her and I have kids (the kindergarteners) who were born on the same day. We each have four kids as well. Even though we don't get a chance to meet up in person, we talk on the phone often or the internet (where we initially met.) Since my kiddo was out next week for spring break, I thought about the possibility of flying there with my kids and visiting to give her a break.

But, life has a way of making other plans. Instead of going to give her a break, I will be attending a memorial service for her baby. She now has three children as her fourth grew angel wings and flew to a better place. The baby's heart issues (that were discovered even before birth) weren't totally fixed even after several surgeries. I was the first person she told when she discovered she was pregnant with this baby. It wasn't a planned pregnancy and the father chose to move on...but she loved her little one from the beginning.

She mentioned bringing the baby's things home from the hospital afterwards and just laying the blanket in the crib (unwashed) so she could still smell her. I remember that feeling from after my mom's passing. I loved to go to my mom's closet and try to smell her long after she was gone. From the movie Hope Floats, a scene like that makes me cry every time.