My grandbaby has Apert Syndrome.

My daughter had her baby girl on Christmas Eve.
She has Apert Syndrome.
Trying to cope.

I had no idea how difficult it was to watch my kiddo go through labor but I managed to be there the whole time and help her as much as I could. My younger daughter turned out to be a steady rock, a labor coach and she was awesome. My older daughter was strong, focused, and it was a great day...when the 'lil one finally started to make her appearance, the cord wrapped around her neck slowed it down a bit but then they got her breathing. We noticed immediately something was off. Hearing words like cleft pallet and webbed fingers as we're trying to peer into the little isolette as they clean her off made it even more scary. Her large forehead and big eyes were the biggest sign that she was not what we expected. The neonatologist confirmed that she had Apert Syndrome. So many other differences...

It's difficult to adjust to a new mindset. I have yet to see her closely or hold her as she is in NICU (should go home next week.) I took a picture but when I see it, I often turn away. Mourning the loss of hopes/dreams for her and her future is...unknown. While she cleft pallet is not too deep and the fingers/toes may be fixed, it's clear her brain is quite different than the average one. I know I'll have new dreams and hopes for her and will love her very much no matter what.

My daughter is sinking...I don't know how to help her or what to say. I am trying to be there for her. She's pumping now and sending her milk to the nursery. I find myself crying a lot (not around her, of course.) I keep looking online for support groups or anything to help us with how we're feeling or what to expect in the future...not very successful.

My daughter says that she hears my younger daughter say that her baby is beautiful and perfect and loves the way she kicks her legs (as we try to peer through the window blinds into the nursery.) My daugher said she wants to see her baby the way my younger daughter sees her but knows it'll take some time to get there.
Posted by robin at 12/26/2012 10:01:00 AM 7 comments:

Blessings Via the Christmas Tree


A lot has happened in the last couple weeks both within the nation as well as at home. Two weeks ago, I received a call from a bystander who was helping my younger daughter by calling me. A woman driving by named Sarah stopped stayed with her until the ambulance arrived. The lady had just gotten off of work as a nurse at the hospital. My daughter had been driving home from one of her jobs late at night and someone pulled out in front of her (they got a ticket for failing to yeild and luckily they had insurance.) Sadly, my daughter wasn't wearing a seat belt therefore her injuries were worse than they could have been. She still has headaches and limps (can't wear a shoe yet due to the bruising and swelling.) Her car was totalled. She lost a lot of hair in the front near her forehead because of the windshield. It could have been so much worse. I am grateful that she is alive and in one piece. I believe someone was looking out for her. 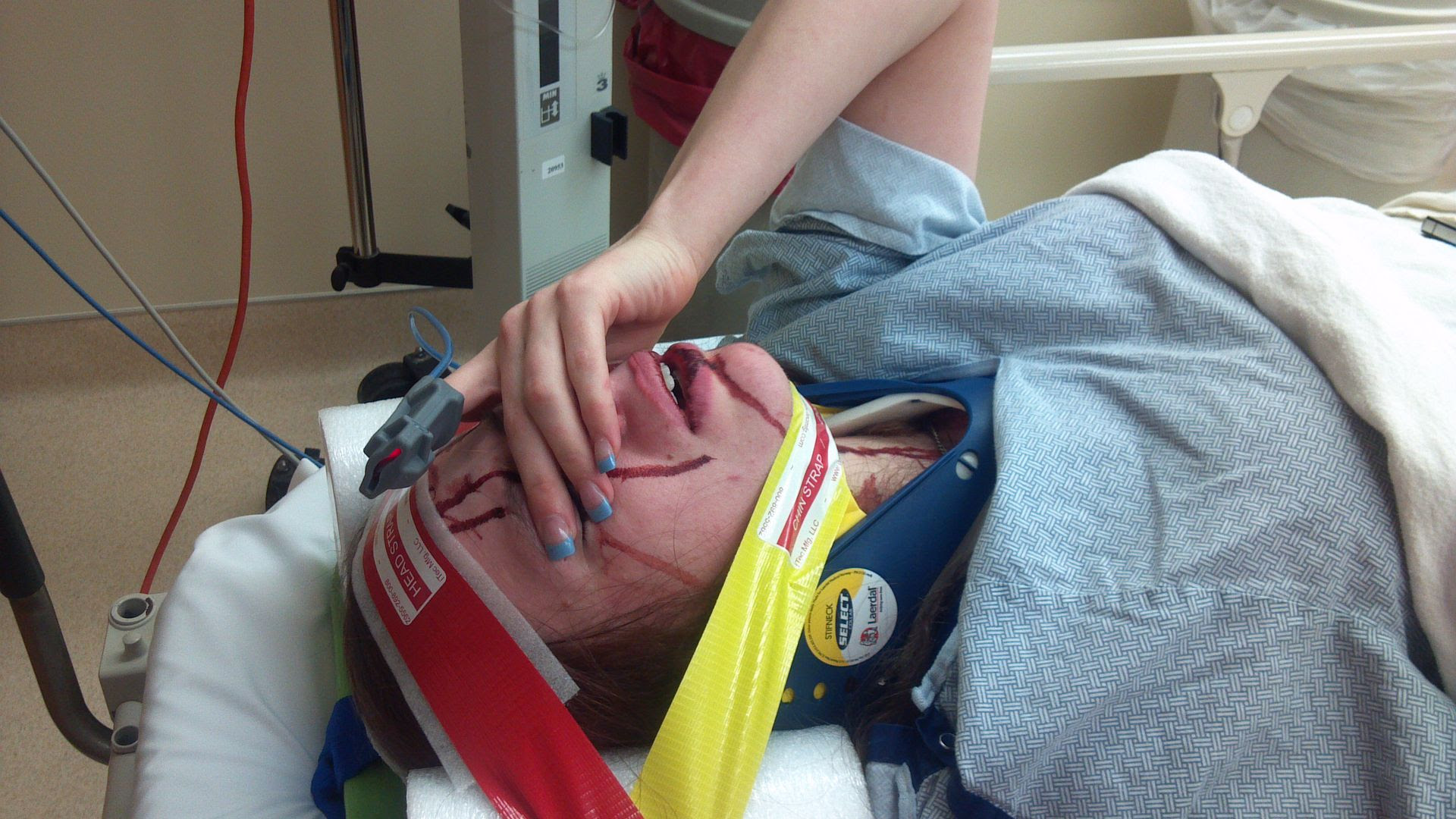 This is what her car looked like afterwards. Of course, I made her take a picture next to it. 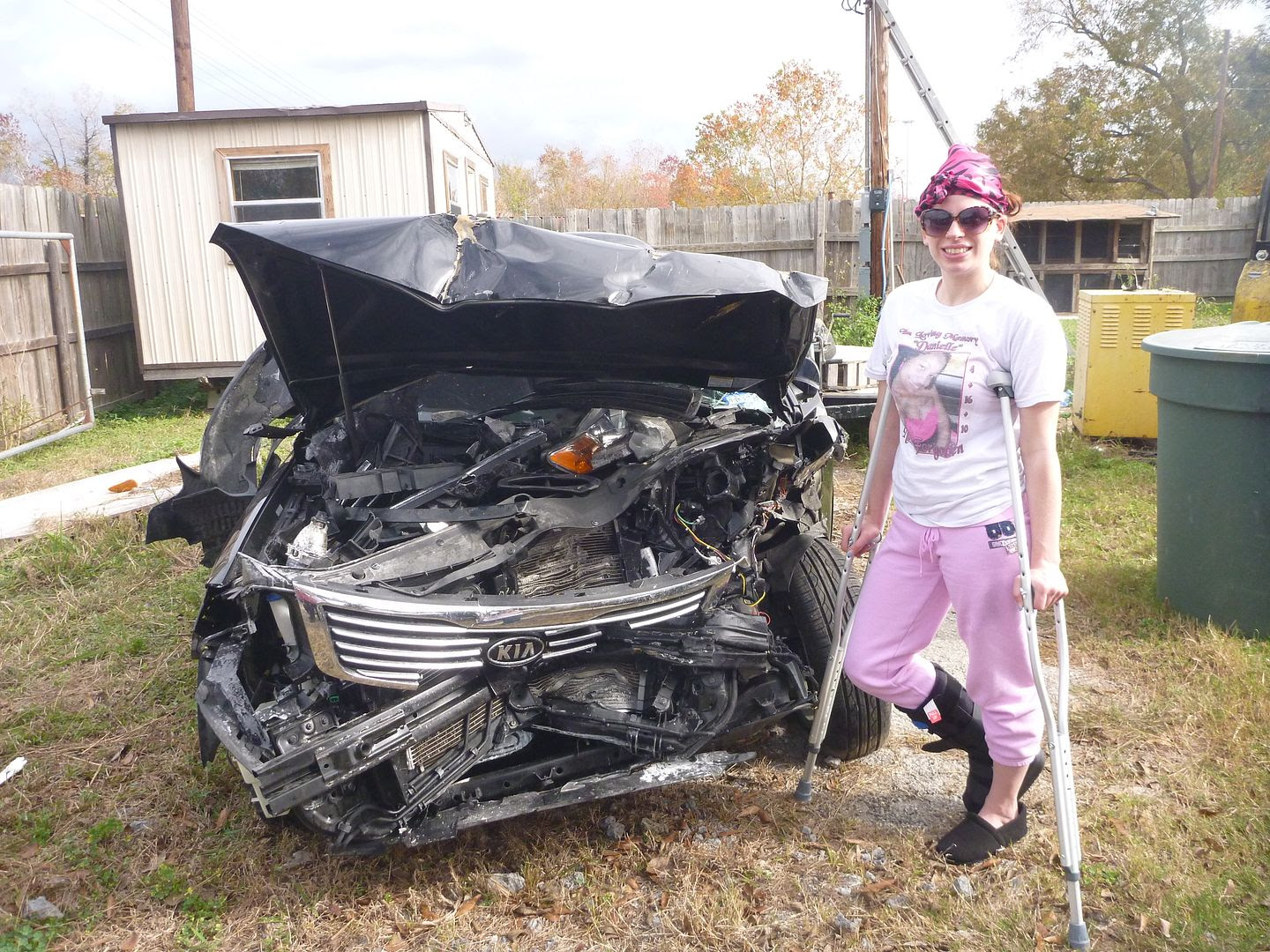 When I see ornaments like this, I automatically think of my sweet girl with whom I am blessed to be a mom. She has developed into a mature young adult who takes care of her responsibilities yet still is caring as ever. As we sat in the ER all night, she was medicated and talked a lot to me, not just the one word answers but actual conversation. It was so awesome. She has continued this with me and I absolutely adore these talks. I'm not taking them for granted but am wishing they continue like this forever. This is probably the closest we've become in many years. Of course, she and the rest of my kiddos wouldn't be here if it weren't for my hubby who has been so kind and generous over the years. At our first Christmas, he bought this for our tree and everytime I see it, I think of him (and the only ornament he ever bought for it, lol!) 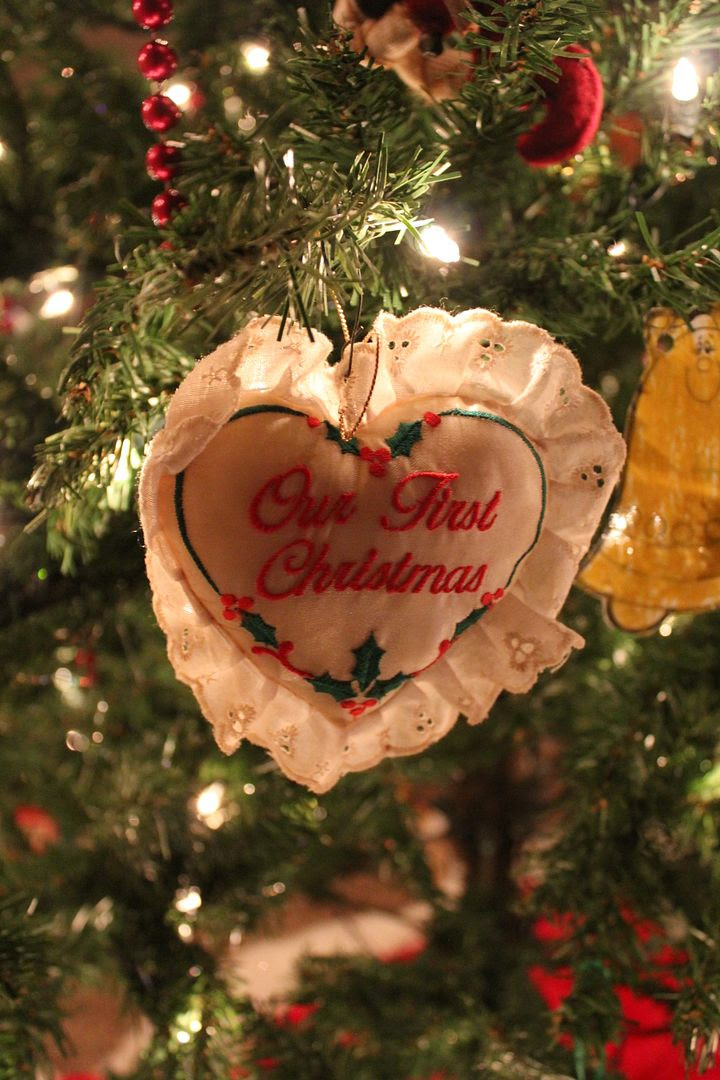 My older daughter, who will bringing into the world a daughter next month, has blossommed into a lovely young woman and I enjoy our new relationship (mom to mom.) She's so different from when she was little, yet the same. I love that I can talk to her and exchange stories relevant to parenting now and we have more common ground. This is my third year using an artificial Christmas tree since my allergies couldn't handle that absolutely incredible great balsam aroma of the fir trees anymore. I am so thankful that this tree was given to us by my older daughter's boyfriend (who had another tree or two) and we really love it! 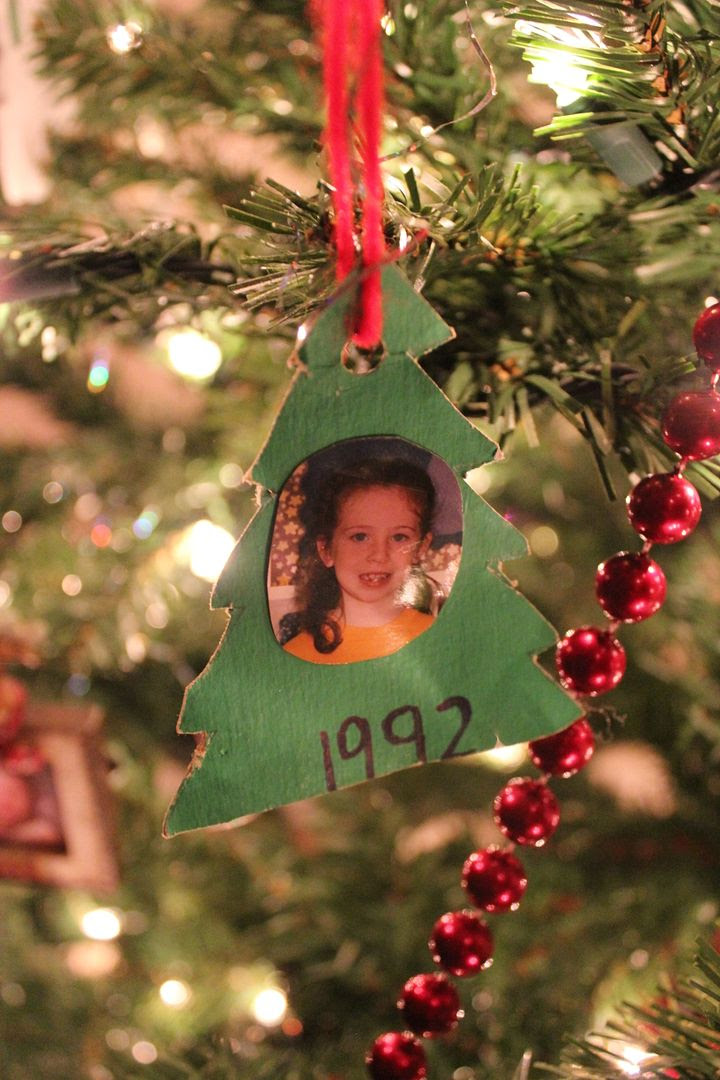 My MIL, the one who's in the ALF with Alzheimers, used to give us an ornament each year. I think they came in Folgers coffee cans. We have many on our tree and each one reminds me of the love and strength throughout the years from both my FIL and MIL. I decorated her room the other day and brought in some things she used to love. My SIL (who lives at the bay) bought her a CD of her favorite Christmas songs (by the Morman Tabernacle Choir) and some soft socks/gloves. I also put out some chocolate candy which she used to love as well. Perhaps somewhere down in there, she's still there and might see our appreciation and care for her. Yes, that one says 1984 (the year DH and I were married.) 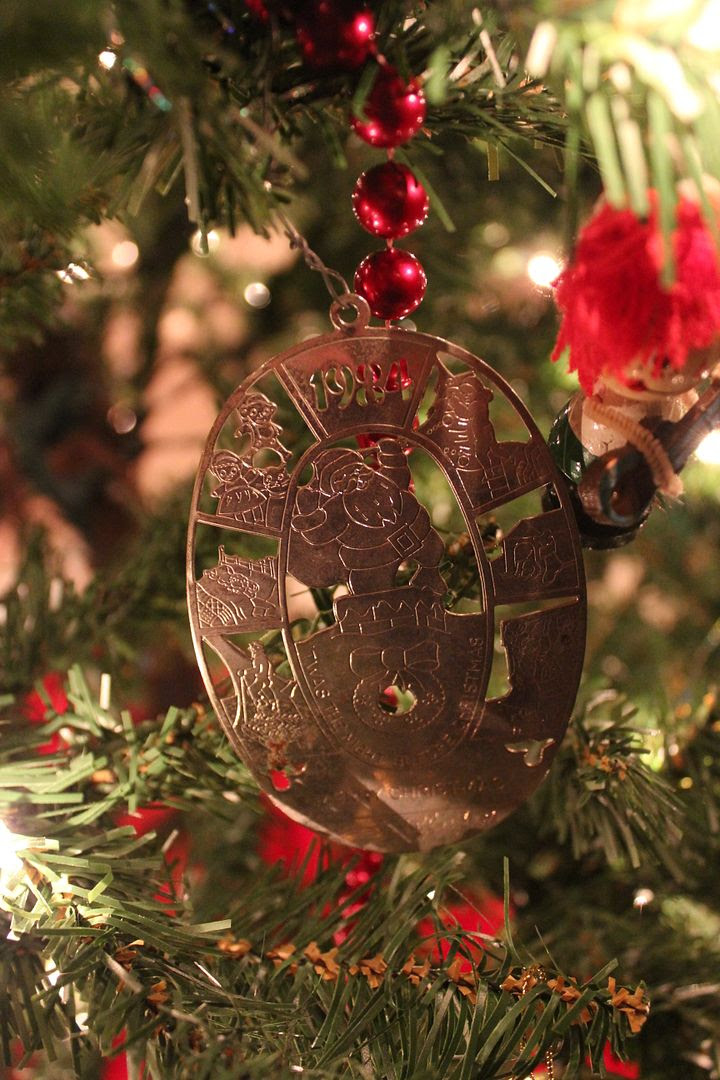 My boys have reinvigorated me and made my life more enjoyable. This ornament was from our first Christmas with my older son when he was a month old. My friend Anita gave it to me (she loves Hallmark ornaments.) Seems like just yesterday. As I write this post, he's in the other room pushing a bear who is singing "Have Yourself a Merry Little Christmas" as it moves. He enjoys the song and says the bear is really soft...pushing it over and over. That's what childhood is for! 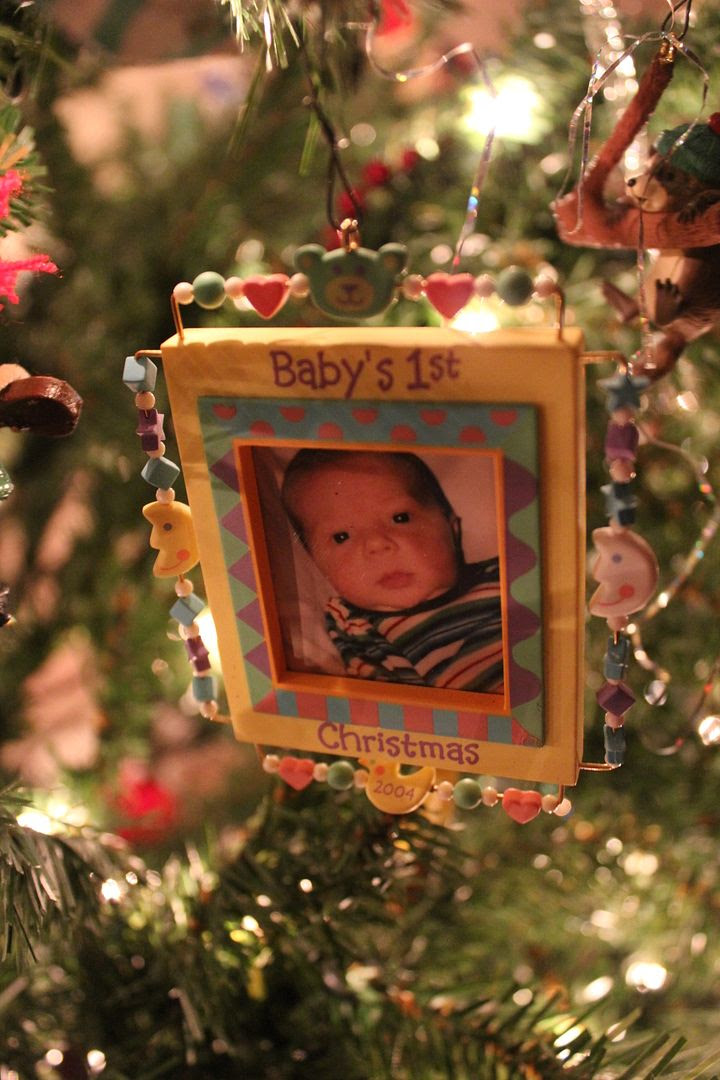 And of course, my youngest son, who wants to be just as big as his brother. He's into Disney Junior now and loves pirates! I returned home after finding a great parking spot at the grocery store yesterday because he begged to go get his elf hat to wear while we were shopping so that people would think he were an elf. I figure...why not? I had the time and you're only four years old once! He loves asking questions and presenting dilemnas like, "What would happen if..." 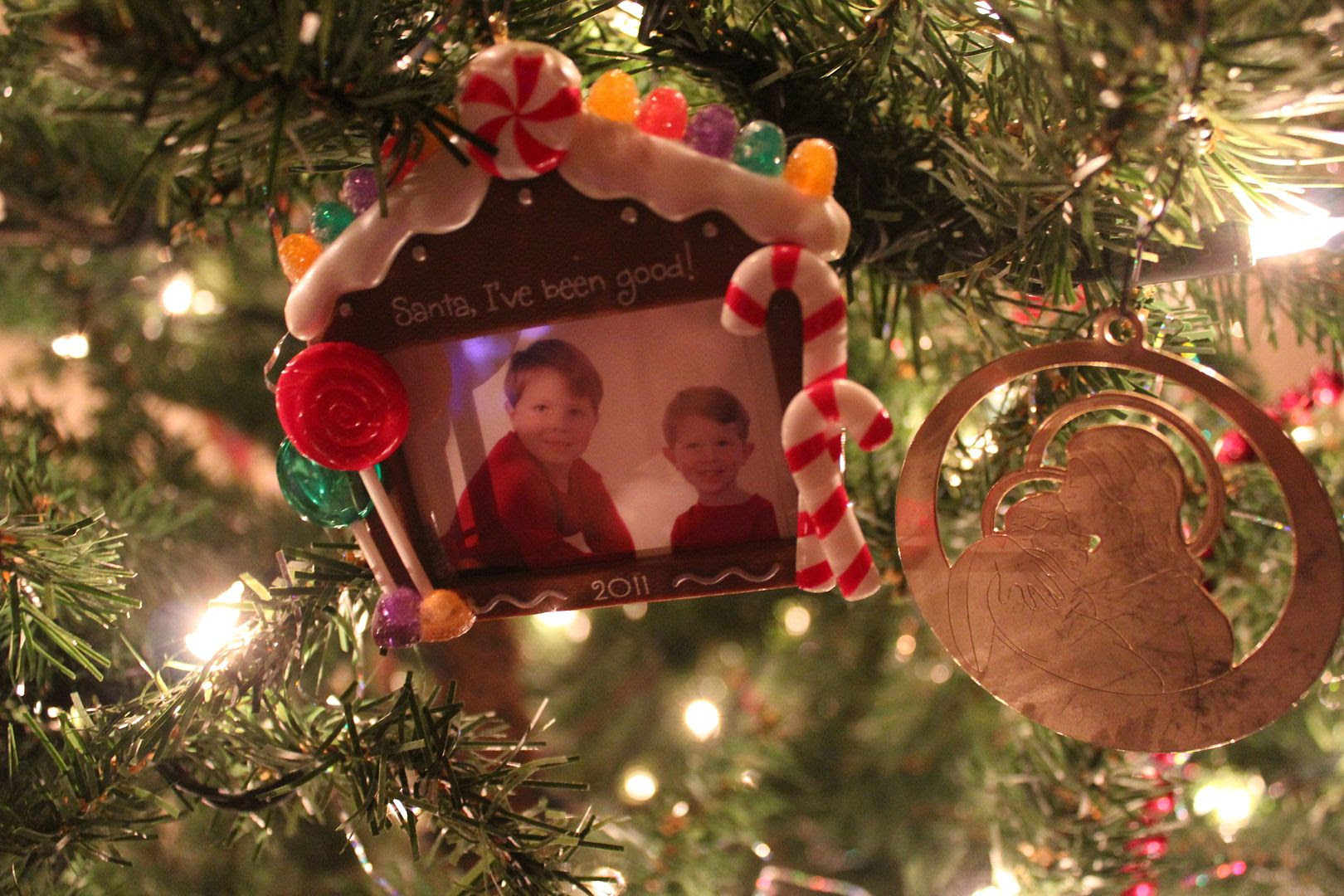 My parents, of course, are part of me and my soul. I grabbed this raccoon ornament the Christmas after my mom died when I helped my Dad and brothers take their tree down. I was with her when she bought it...and it just called my name. I miss her...especially during the holiday season. The last ornament is the one I made when I was a little girl, still hanging on...getting older...but still loving Christmas...and life! 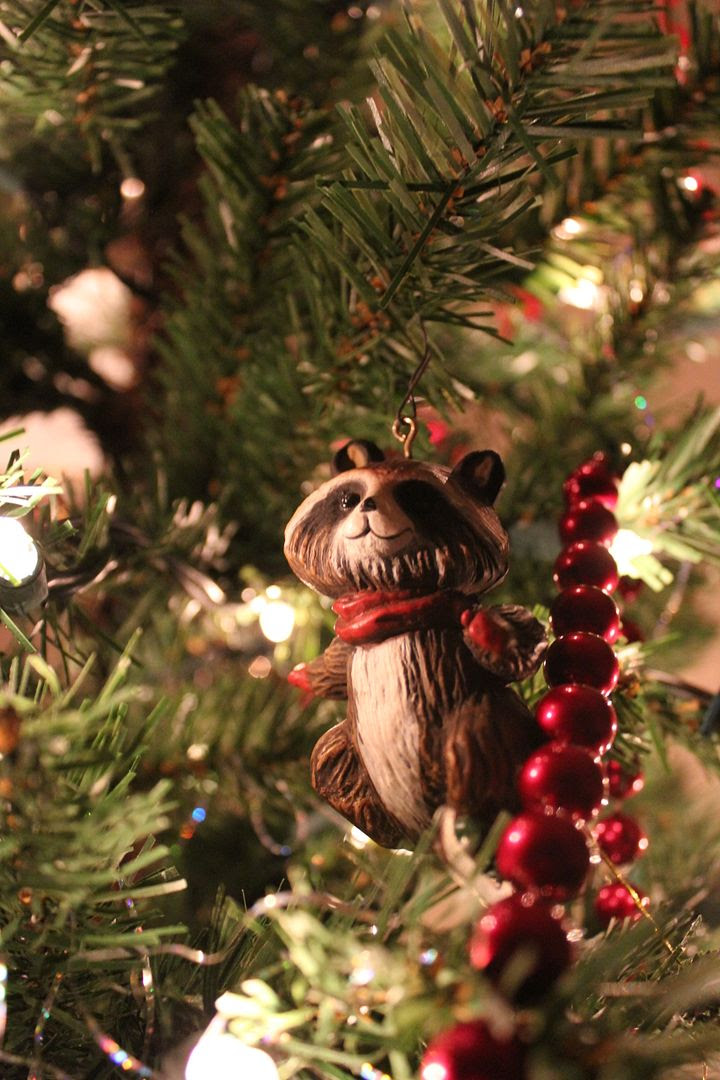