A visit to the past

I visited my former place of employment today. I worked at the facility for over 12 years and resigned about 5 years ago. I was a juvenile probation officer who supervised juveniles and young adults on parole. I had only visited there once in that time, until today. One friend who works there had a box of pecans I bought for me (I was out of town when they arrived through the county and she kept them for me until I returned.) As I walked to the building, it felt so familiar. I was so happy to see several former coworkers and see how much they've changed in the last several years. Whereas it seemed (to everyone there) that they changed slowly through the years, because I hadn't seen them in so long, it was immediately obvious how much they changed.

What I found interesting is that, while I was there, I remembered why I don't usually go there to visit. I felt so sad (almost teared up) as the place seemed like another home to me and I wasn't able to live there anymore. I really loved my work there....it was stressful, time-consuming, and chaotic at times...but I loved it. My former supervisor asked me how I liked being home with the boys (the reason that I resigned was to stay home with my son after he was born, and then consequently my other son afterwards) and whether I missed the place. I said that I missed being able to take breaks and have a specified lunch time (lol!), the camaraderie, and being able to see short-term results (seeing how I made a positive difference.)

But, I added that I know that I'm making a difference with my kiddos at home in the long-term. As long as we can afford me staying home and not working, I'll continue to stay home. For right now, that's the best decision for my family.

And that is what is most important. I'll continue to devote my extra time on the people around me who need it most, my immediate and extended family.
Posted by robin at 11/18/2009 09:25:00 PM 2 comments:

I love this video via youtube. It gives me warm fuzzies and I love the song. I included the song on my mp3 player for when I go to the gym (it sounds motivational to work.) It makes me feel like I'm not alone in the world..and that we're all connected. (oh and you have to click on the word video to see it.)
Posted by robin at 11/12/2009 03:15:00 PM No comments:

After returning from my camping trip, I waited a couple days to visit my MIL as my little one had a runny nose and I didn't want to bring in any extra germs. Normally, she will soil her clothes, wait for them to dry and then hang them back up in her closet (where they'll 'contaminate' other clothes close by too.)

On this occasion, I see that someone has helped her out. Either that, or she hasn't been walking a lot and hasn't had the energy to put them back up. For her bathroom floor was covered in sheets, mattress pads, numerous pairs of pants, socks and underclothing. While I was happy that she hadn't placed them all back in her closet, it was nowhere near Friday (the day of the week where her facility washes the clothes.) Her bed sheets/pads were also wet and needed to be changed. That meant that I had to either use the facility's equipment and have it washing while I took her to her doctor appointment or just go buy another set. I chose the latter. I knew I wouldn't be in the mood to sit and wait after the ordeal of getting her in and out of the car. She is so afraid of falling. She's already gone to the hospital again after falling and hitting her head (since her last broken finger accident.) It's hard for her to remember what to do first when getting in or out of a car. I have to be a cheerleader of sorts. (First stand up, then swivel until your bottom is near the seat, then sit, then put your legs in.) I guess it is difficult when you can't really remember how to do it smoothly since it doesn't happen often and is stressful.

While gone taking her to the doctor, I stopped at a store and ran in to buy more sheets. After I returned, I changed her sheets and gathered many clothes to be washed. I tried not to gag. After filling four huge plastic garbage bags, I knew it'd take me a LONG time to do them at home and I didn't want to have that odor around that long. So, I decided to just go to the washateria instead.

I normally look forward to going to one (it's been a long time though.) I had forgotten about the convenience of those nice rolling baskets. I wish the lady who watched me move all those loads of clothes by hand (dropping some one the floor) would have reminded me of them when she first saw me doing that instead of when I had just finished. When I realized how easier I could have made the whole process, I gave her that 'duh, I feel stupid' look and laughed. Oh well. What a release of negative energy to laugh at something stupid I did...it made me stop whining to myself about what I was doing and get me back on track.

And I did...I went back and thought of all the nice things my mother-in-law did for me over the years. Since I lost my parents as a young adult, I often relied on her for important information, conversation and motherly advice. We didn't often have the same opinion on much, but I have her the respect and courtesy while listening. I wished I had written down many stories of her childhood and of her family growing up. I had heard them so many times over the years that I thought I'd never forget them. I had no idea that at some point, I'd never hear them again.

Some recent pics of MIL. 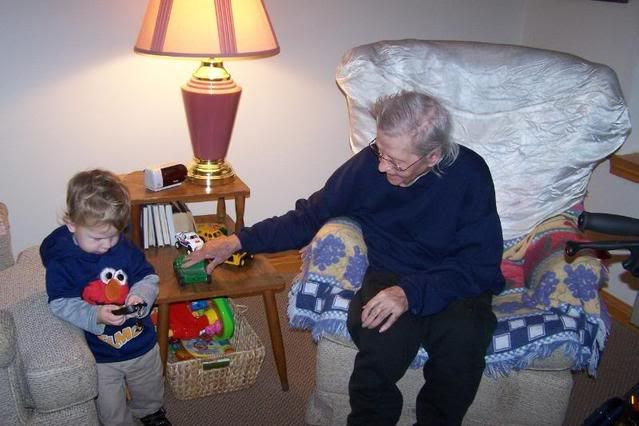 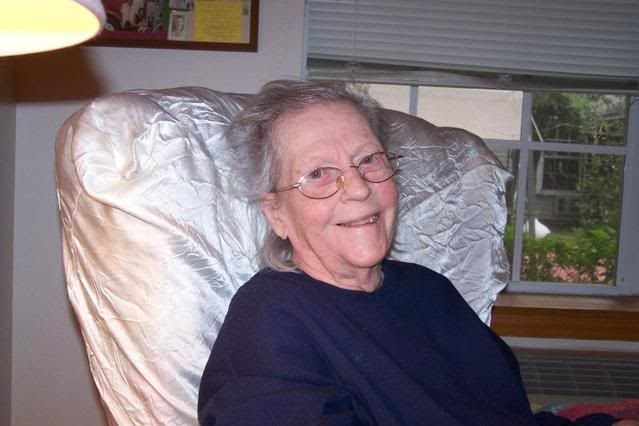 (and with her purple shoes.) 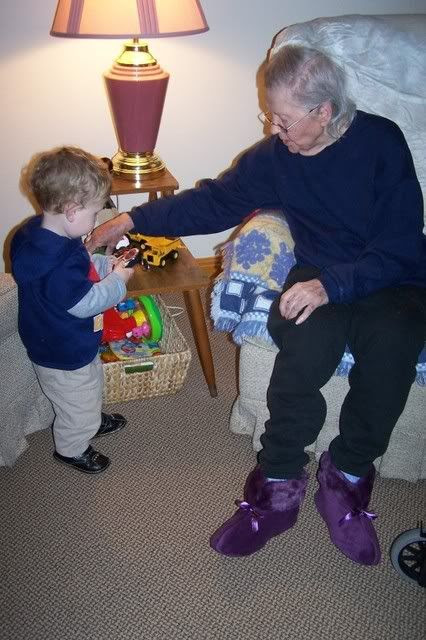 ...I think I'd much rather go camping and drive scenic drives than go to an adventure type place like Disney World. We had an awesome time and I think that this is the best time to enjoy the great views and awesome changing of the leaves.

This tree was right outside our tent. I love how there are at least three colors in the leaves and how well they look together. It was so peaceful watching the leaves fall. 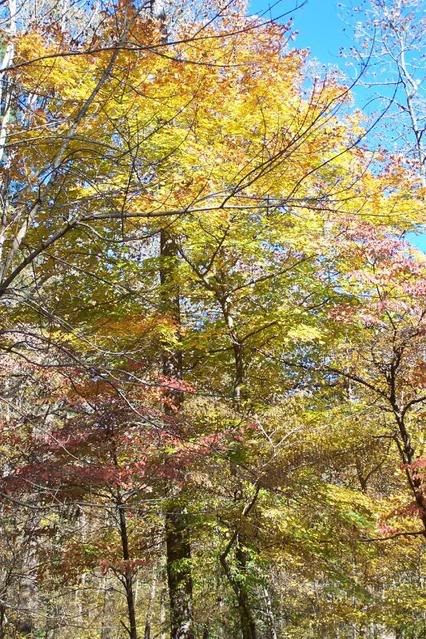 Throughout the year, I try to remember how it sounds as the water flows past and the sounds of the night. Each time I return, I am amazed at how much I forgot and how wonderful the sounds are. 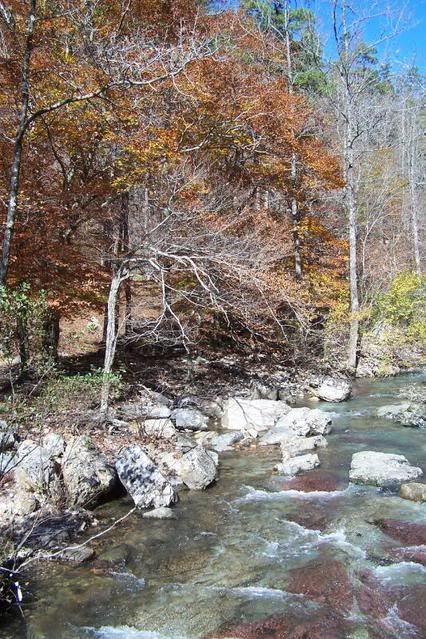 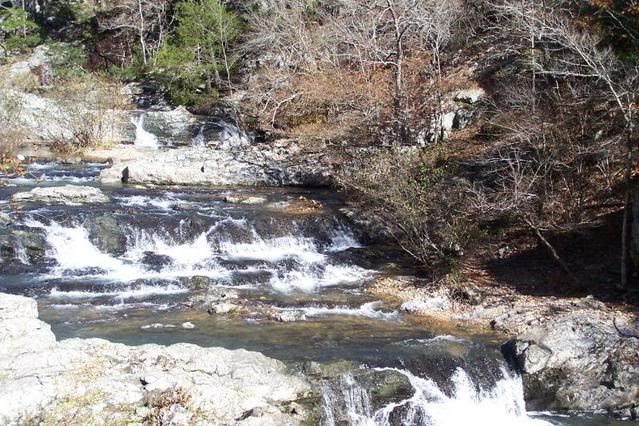 Me at the bottom of a hill. I look forward to hiking the trails in the National Forest where we camp. We have returned to the Ouachita Mountains for many years now. 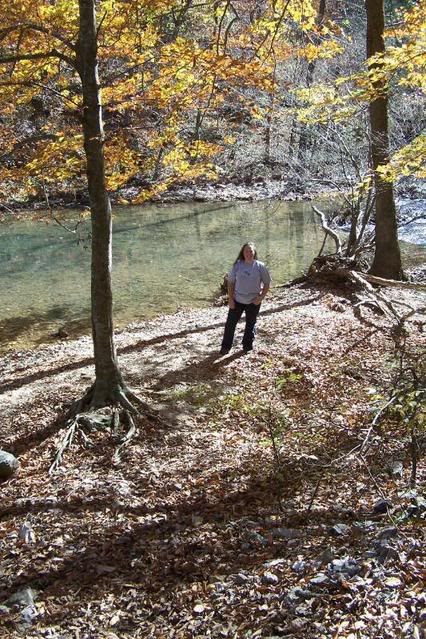 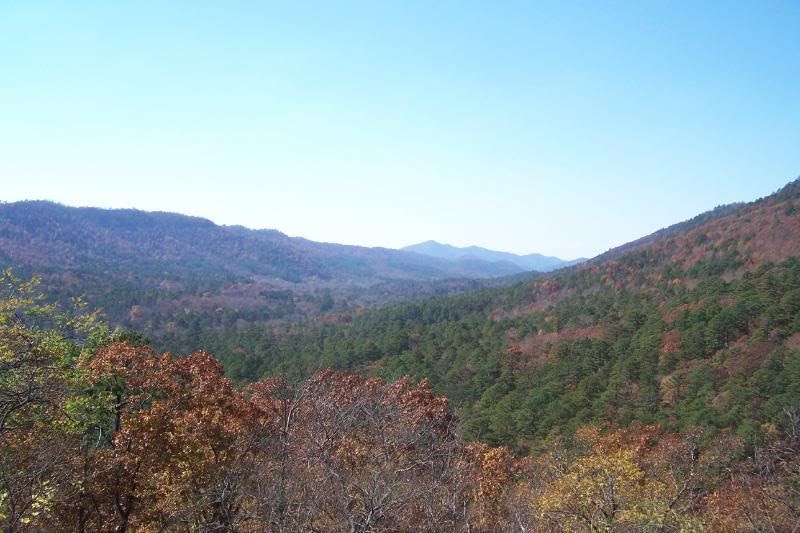 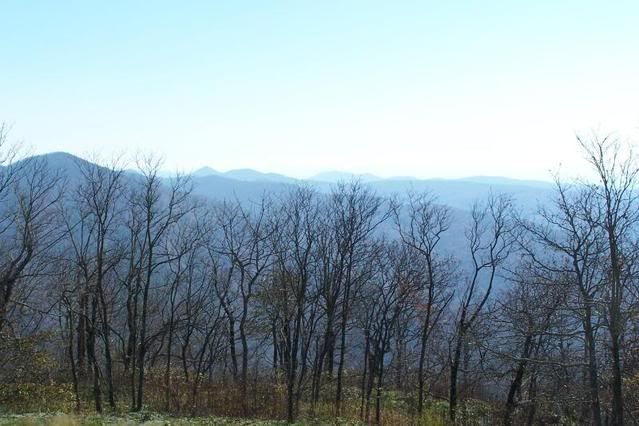 More trees. I just love looking up at them. 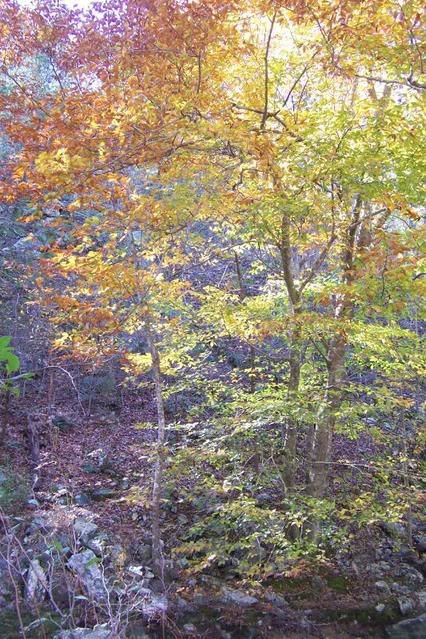 My little one does too. 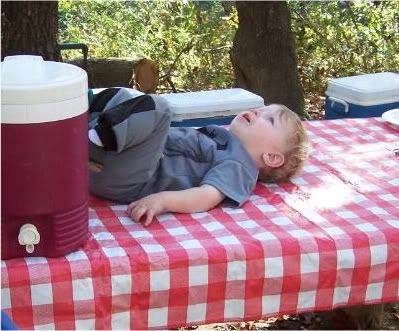 The one lane roads are tricky to drive...especially with all the switchbacks. 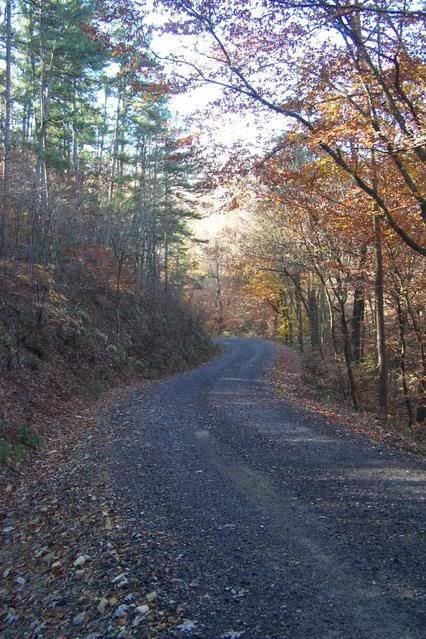 We just love the water... I found this place when I looked on the map for the nearest area to camp that had mountains and water where there weren't a lot of people. We happened upon this particular camping park and, even though I've looked elsewhere, I haven't found anyplace I enjoy more. It's not too far from home...about 6 or 7 hours. 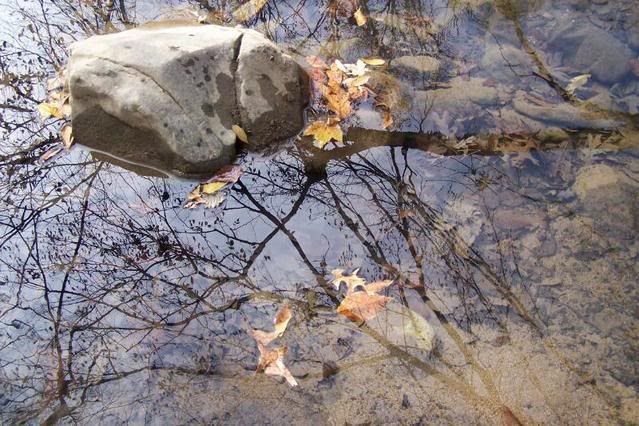 This is right behind our tent/camp area. 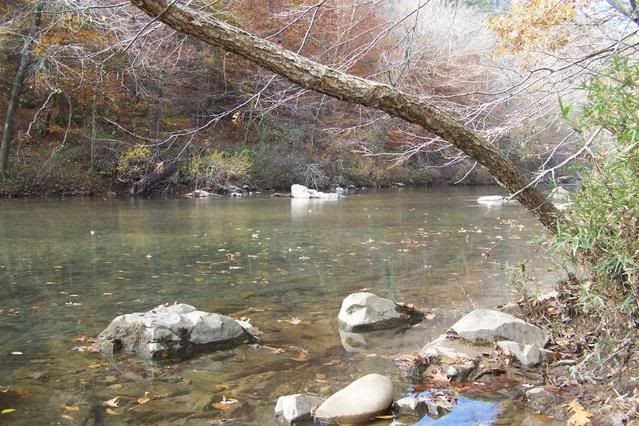 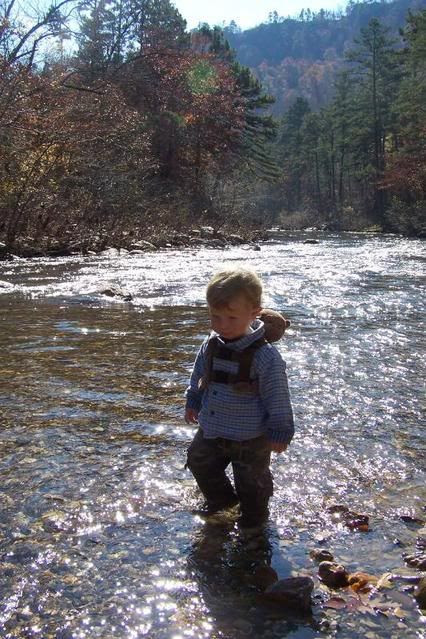 Another hike. This is near the top of a hill looking down. 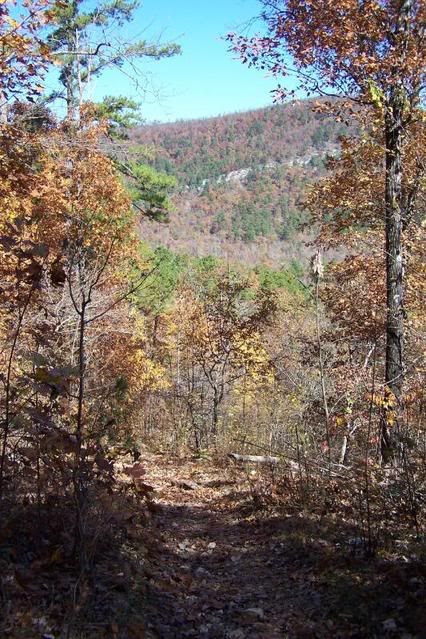 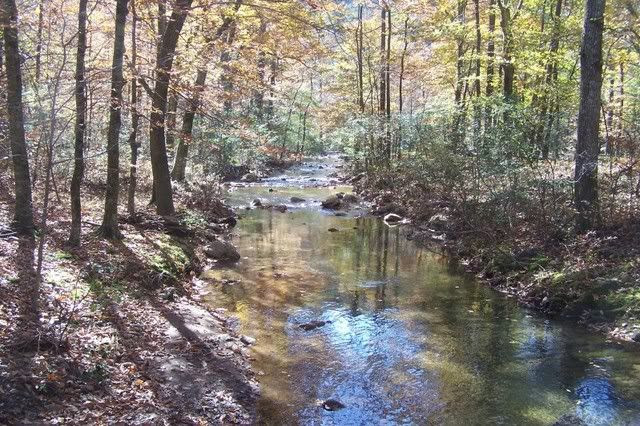 This is the life! 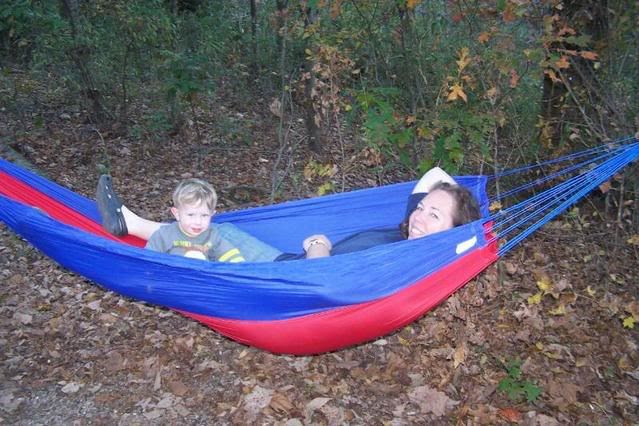