We went on a daytrip out of town and decided at the last minute to go to their local beach a couple days ago. Here are my favorite pictures from the day.

Here is my favorite...my preschooler dancing around in the water. 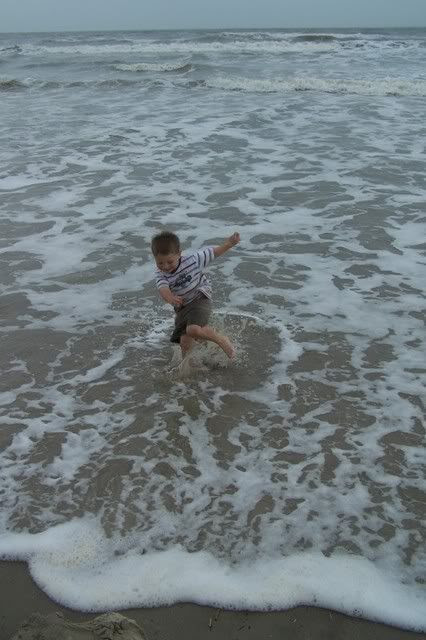 My baby loved feeling sand on his toes. 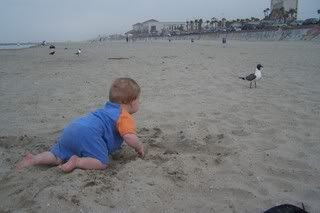 Loving to get dirty! 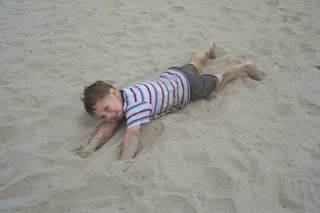 Little bumps in the night lately have had me 'on edge.' I'm sure there have always been noises at night like the ice machine in the refrigerator dumping cubes, wood floors cracking, freezer compressors making noises... Now that our dog Fatty has passed on and is no longer with us, I lack the security I once felt when I knew she always barked if someone knocked on the door. Often, I'm the only parent at home with the kids and now that my younger daughter works (and usually until late hours,) I am essentially home alone. I think I began feeling more insecure just this week when my daughter spent the night with a friend a couple nights (it's Spring Break.) Just knowing she was gone made it even more lonely. I can see why she 'gets scared' if we go out of town and leave her home alone (which we've done twice...hey, she's 18.) There hasn't been any safety (or rather non-safety) issues around my house, per se, but I think I'll check into more lighting outside the house. That reminds me, I haven't changed my smoke detector batteries lately (not since we moved here a year ago.) I need to add that to my list to make it more safe at home.
Posted by robin at 3/23/2009 11:15:00 PM 1 comment:

Ignorance is bliss... I was watching the news recently when I heard a story about a man who pled guilty and was sentenced to 60 years in prison for the murdering someone a few years ago. What made it seem familiar was that I knew the man...I had worked with him as a teen many times over and over in my job in my former life (before resigning to have more children.) Everyone I worked with was on juvenile parole and since there are so many people being charged and sentenced, my vaguesness helps protect his identity. This particular teen was one of the first ones I worked with and I got to know his entire family as well. Long after he outgrew the parole supervision, and then moved on to adult probation for more offences, I still saw his mom here or there and spoke with her. He never changed and still had the same types of behavior that got him locked up and paroled in the first place. About three or four years ago, he and his family moved into a housing project close by my house and he was walking by my house on my road. He recognized me (playing with my kid in the front yard) and stopped to talk. We spoke for about 15 minutes. While I was friendly and jumped into my former probation officer role while talking, I couldn't help thinking...OMG, he knows where I live! He was one of those kids who smoked weed way too much, hung out with the wrong crowd, didn't do well in school...those kind you know won't make it and didn't have the consistency from home or the resources to keep him in line. And you can't do anything about it because there were others just like them going down the same road to failure and I had to do as much as I could in as little time as possible.

It's interesting to watch the local news as I listen for names and many, many times, I recognize someone I used to work with. I have lost count of the ones I've worked with at one time who were sent to prison for life or for the majority of their lives. Even a couple on death row. It's not that I or my agency didn't do a good job, per se, but most of the time, by the time I started working with them, the damage had already been done.

While I really miss what I used to do and that career, I don't miss knowing those criminals and their crimes. I have since been able to drive down a road and not know this newer generation of kids and their crimes/families/background. I don't want to know, actually. I prefer to be ignorant. I know too many people who've done terrible things and too much about what goes on behind closed doors, so to speak.

I love tomato plants! I don't necessarily like to eat tomatoes, love them cooked, but am just starting to like tomatoes themselves. I love, love, love the smell of the plants (and tomatoes as they grow.) This year, I mentioned something to my husband who was so nice to plant some for me. We spent a few hours planting them: finding pebbles for the bottom of the pots, then he put a layer of sand, then a layer of a special dirt, a garden mix. My husband has a special kind of dirt that he uses for all his plants. As he shoveled some to use for the pots, it was full of huge worms (which means it's really great dirt!) I am so grateful for him to spend so much time on a simple request. If we get lots of tomatoes, he can use them to trade for haircuts as his barber loves tomatoes too. In the past, he's bartered haircuts for vegetables. Now that both he and my preschooler get haircuts at the same place, it's a great idea! And I don't have to walk far to enjoy the great smell that I love so much. It was a great family project that we all enjoyed. 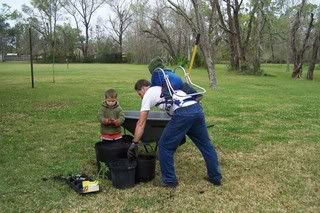 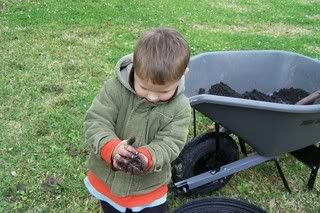 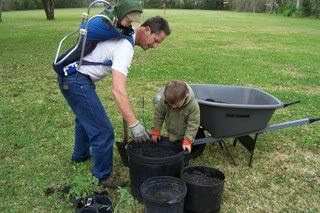 We went to a get-together with co-workers from my husband's work yesterday in Louisiana. I had only met one guy he worked with and was a little anxious. It was a crawfish boil and we needed to travel a few hours to get there. We planned on spending the night afterwards. Unfortunately, the weather didn't cooperate. It was really cold and rainy. Fortunately, they had a tent outside next to their carport so there was room for everyone to stand where they wouldn't get wet. The co-worker harvested the crawfish that morning from his crawfish farm located right next to his property just across the yard. My preschooler loved walking over to see the crawfish field and the horses roaming near it. There was a huge dirt pile in the yard too and a couple other boys so he was in heaven all afternoon. It was nice meeting many friendly people (not too many, which was good) and eating lots of crawfish! They also had sausage, corn, potatoes and mushrooms that they boiled...yummy! Luckily, I had brought plenty of warm outerwear for the kids (complete with hats, mittens and slippers for the baby to go over his socks.) After several hours, we couldn't stand the cold anymore and just wanted to get warm. The hotel was nice enough to cancel our reservations and we weren't out that money so we drove back home last night. It was good to be home again and sleep in our own room.
Posted by robin at 3/15/2009 06:54:00 PM 1 comment:

Time to clean out my pantry and cabinets! NO, not my idea...but since my little crawler has, in the last few weeks, become mobile and curious, everything has been emptied!!! And my floors...I can't count the times I've swept and vacuumed more in the last week. I have no idea where little pieces of whatever show up on my floor but I guess having a big brother who loves to play outside and go in and out has something to do with it! I am currently listening to my cabinet door opening and closing, over and over again (and then a sound of a pan hitting the floor.) 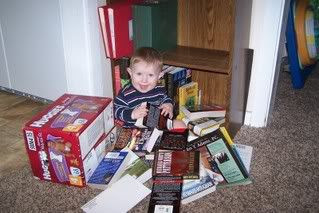 Pinatas and brisket! We went to a birthday party yesterday for a friend's son who turned two. My friend spent eight years trying to have this baby (and that time included another child who was born premature and died within hours of being born.) Finally, they have a wonderful child who is strong and has survived at least two heart surgeries. He is precious, handsome and definitely loved. It was nice going and celebrating his life and spending time with his family/extended families. There was lots of food and pinatas (of course, he's Hispanic!) I had no idea how much fun pinatas were. Lately, I've been to two parties which included them. This one allowed kids to line up from smallest to largest and take a whack at the pinata. By the time the oldest kid got his turn, he was able to break it and they all politely rushed in to grab some candy. Little bags were given so they could collect their treasures. It took place in my friend's back yard and they had an inflatable bouncy thing for the kids to jump in. My preschooler spent most of his time in there. It was a good day!
Posted by robin at 3/08/2009 10:37:00 AM No comments:

My daughters obtained jobs this week...just happened to be the same place! They both went job-searching on Monday together. Luckily, they each obtained positions at the same place at a local upscale restaurant (the older as a server and the younger as a hostess.) My oldest daughter is one of those people who are very friendly, fit into any situation and is an extrovert, a perfect choice for a server. My other daughter can pretend to be sincere very well and has a great smile. She's not server material (that's too fast paced and stressful so the hostess position is perfect for her.) I'm hoping it works out for the both of them.
Posted by robin at 3/06/2009 09:03:00 AM No comments: