I love gardenias. It's my favorite flower! This morning, I picked bunches of gardenias from my gardenia bushes in the yard. My husband had propagated several bushes from one bush years ago and each year, they get bigger and have more flowers. The flowers are so fragrant that it makes the each room smell great! We often give a bouquet of them to our neighbors. As a child, my window was near a gardenia bush and whenever I opened my window, I could smell them. And when I was older, I used to bring them to work and the whole hall where my office was located had the gardenia scent. It's amazing how nature produces such a sweet lovely scent.... 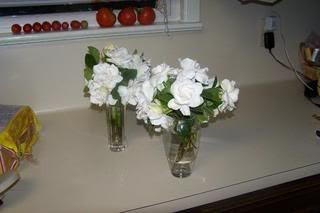 Here are a couple bunches I grabbed this morning (I took the pic late tonight.) They still look good. I just noticed the tomatoes behind them (from the tomato plants we planted weeks ago.)
Posted by robin at 5/30/2009 11:15:00 AM 3 comments:

Today was last day at PK3 school for my preschooler (3 year old class that was a few days a week for half a day.) I really liked his teacher (she was wonderful especially when we were dealing with a few issues in the beginning.) My kiddo made great friends and I made a few acquaintances and a friend from there.

I just went through his stuff that we took home including a video that his teacher made for all the kids. It was a compilation of a lot of pictures of the kids throughout the year, for special occasions and in the daily schedule (recess, computer, library, etc.)

The pictures were shown with songs (great ones) and seeing my own kid (as he changed throughout the year) along with his classmates, I cried like a baby.

I went to a Senior Recognition Award Ceremony last night. My daughter has spent the last couple years trying to make up credits in order to graduate. She hasn't graduated from school yet because she has to first pass two parts of the state achievement test, but she will have finished the credits in order to graduate this year. Hopefully, she can get actually finish in July, and/or October when she retakes the tests. It was a nice ceremony and she was very pretty! She has had a very difficult time in school and has overcome some obstacles in order to go this far. Her attention deficit and other issues with her learning made school really stressful for her. I am very proud of her. 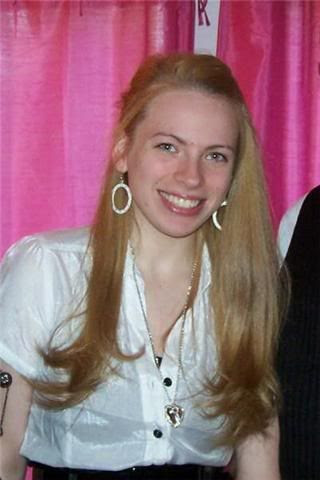 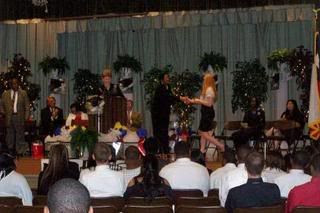 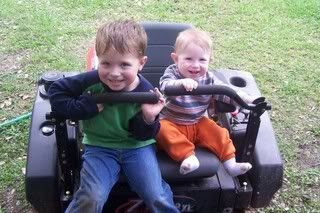 They have been playing outside a lot lately. My preschooler will often push the baby around...and they both really enjoy it!!! 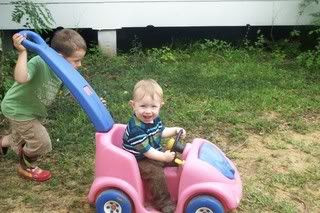 At the end of the day, they sleep well. 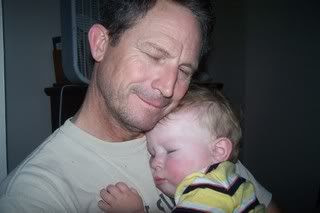 Here, take it, I had a good day! That's what I said to the man at the store who walked my cart full of groceries out to the car and unloaded them for me. All I had was a $5 dollar bill so I offered it to him. He said, no, that's too much. He was an older gentleman, probably in his sixties, and he let me know of a sale of soft drinks at another store (with a good deal on them as he noticed I had bought some.) It was a good day...my mother-in-law was happy and I was feeling like my shoulders were being unburdened. I insisted he take it and I wanted him to feel as happy as I was right then.

My mother-in-law can't remember whether all of her kids are alive at times or where she is...I bet living alone in her house was incredibly lonely and scary for her. She is happier now at this assisted living home and has people around her who are really nice to her. This afternoon, she had the hugest smile on her face when I went to see her. She's had a good day too. 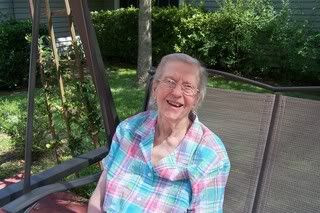 What a week! So tiring, emotionally and physically. My youngest son was sick (it's been a week and he's finally feeling a little better) with a sinus infection that left him very congested and unable to nurse. He just wanted to be held and sleep well. There were a couple of nights that I stayed awake most of the night because it was stressful to hear him trying to breathe through his nose, then cough, then wake himself up and repeat the cycle. Fortunately, that only lasted two nights.

And the stress of moving my mother-in-law into her new apartment, empathizing with her feelings (of not going back home as well as being frightened in a new place), and having inlaws come stay with me (so that they can also support their mom as she moves.)

It was a really long week. Yesterday morning, my husband mentioned wanting to see my youngest son smile. Usually a happy baby who is always smiling, he has had a blank face or one of pain/discomfort. This afternoon, though, he started smiling again and my husband quickly alerted me to his smile! He's feeling a lot better...and so are we.
Posted by robin at 5/22/2009 04:16:00 PM 3 comments:

If I were a millionaire, I'd have my hair washed and fixed by someone else every single day! I absolutely love that feeling as well as how it looks when someone else does it. It always seems to look better too!

My hair has grown so slowly in the past decade that it takes forever to grow enough to have to get cut. Earlier today, I remembered about fifteen years ago that it was so thick that I couldn't even put it in a pony tail because it was so heavy. Ugh! Now, it's so thin that pony tail holders seem to fall out! As I watched my mother-in-law get her hair set today with her very thin strands of gray dry hair, I thought to myself, she was probably envying my hair. I should enjoy what I have and be thankful!

With all the recent steps insuring my mother-in-law gets the best of care with what she can afford, I keep hearing over and over to invest in Long Term Care Insurance now, while I'm young. And you know what, I had no idea how much it cost to live somewhere like at an assisted-living facility. For instance, my mother-in-law does not have any Long Term Care Insurance therefore has to pay out of pocket if we want her to be in a place other than a nursing home (which would be paid by medicare because she doesn't have much money.) It costs around $4,000 dollars to share a room with someone else at an assisted living place here where we live.

I finally found one which has a studio apartment where she doesn't have to share (a big room where she can put a bed and a couple of chairs which is huge compared to the half rooms I have seen at other places.) Since she is a widow of a soldier who served during war time, she may be eligible for a little money from the VA but it's going to take up to 6 months for it to kick in. So, of what little money she does have, it'll go toward that assisted living until it's used up, then she'll go to a nursing home (hopefully in a couple of years or longer.) We may rent out her house to subsidize her when her money runs out but as it appears now, we'll be taking care of her taxes and house insurance out of our pocket. She'll still going to have a deficit of about $2,000 each month. How sad... I can't see putting her somewhere like in a nursing home where she shares half a room...there is no room for anything except a bed for each resident (and a tv stand maybe.)

She had 8 kids...5 are still alive and has grandkids and great grandkids. But for her illness, it is quite burdensome to whoever cares for her. I love her but can't do it. You have to really love someone to care for them in this situation. While I do, I don't have the time with two small kids and the work schedule of my husband. But, I'm doing the very next best thing. And, I'm going to be looking into this insurance...I don't want my kids or grandkids to be in my shoes right now.
Posted by robin at 5/03/2009 11:25:00 PM 2 comments: